In the satellite communications (SATCOM) industry, the word “innovation” captures both the excitement and the frustration of successful business as they struggle with the question of “How do we grow from here?”

Companies spend a great deal of effort to encourage and inspire innovation and then struggle to turn it into something that can earn a profit. Navigating the perilous passage between the need to change and the need to deliver the next quarter’s performance is a journey that few can complete. The companies that can and do complete this journey sometimes transform into companies that are scarcely recognizable from their pre-innovation selves.

Necessity is the Mother of Innovation
Why innovate? Companies will claim they need to innovate or die — that’s partially true, but many of them die anyway, even after spending their earnings on innovative efforts when they could have just returned that money to shareholders. Choreographed innovation seldom works — innovation inspired by the fear of imminent failure usually works pretty well. Innovations that solve problems tend to stick around and evolve into new business models. Companies may or may not include the innovator in their success.

Kodak innovated by making photography available to the mass market — Kodak made it so people could do something they could not do before — that’s innovation. However, when was the last time you purchased a camera? Was Kodak successful? I’d argue they were; let’s see how many folks remember Apple on their 130th anniversary in 2106. Remember Webvan? You probably do not. It turns out that the problem they solved (online ordering and quick delivery of groceries) didn’t need to be solved.

In the satellite industry, it’s easy to find examples of these extremes. Innovative companies solve problems and enable new long-term businesses transformations and audacious bold initiatives that offer a better way of doing what we already do pretty well today. Of course, they all claim to be innovators — you don’t see a lot of investment or marketing claims around “Same old stuff.” 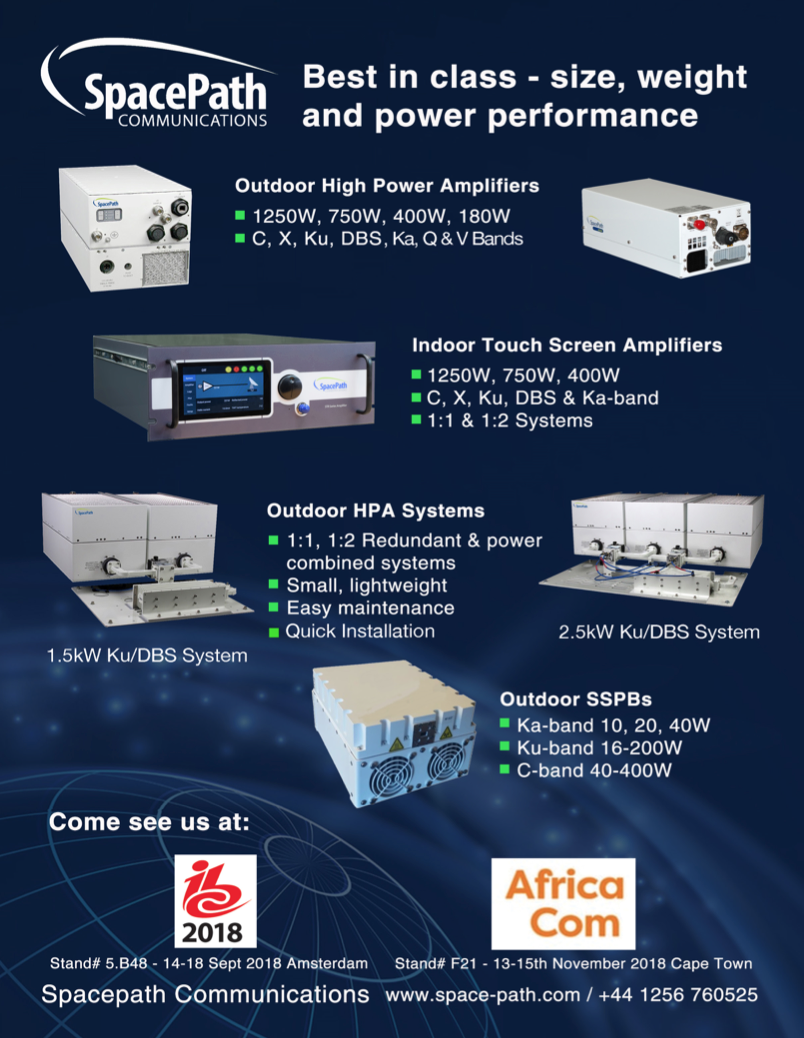 It’s All About the Terminals
A speaker at a June 2018 industry conference pointed out that the cost of a satellite network over its lifetime was dominated not by the initial investment in the satellite and launching, but by the ground terminals needed over the life of the satellites. Moreover, the ability of users to find terminals that fit within their financial and operational constraints determined if the network was successful or not. There are very costly examples of networks that have failed to meet their mobile user’s objectives due to a failure to plan and include ground terminals.

Mission Microwave’s thesis is that innovation happens faster on ground terminals than it does in spacecraft. Hardly an earth shattering revelation, but one that merits a thoughtful analysis, lest we run willy-nilly in the wrong direction by rushing into innovation on orbit before have we innovated on the ground.

There are two reasons for this difference in innovation: the equipment life cycle differences between ground and space, and disaggregated “structure” of the industry supporting the ground terminal business.

Life Cycles Define Innovation Timelines
In an earlier article in SatMagazine, the value difference between the different parts of a ground terminal were detailed. Each component in a ground terminal evolves in terms of price and performance on its own life cycle, depending on demand, supply chain, and technology maturity.

A spacecraft in a geostationary satellite network typically has a design life of 15 years and a service life well beyond that (some are still active at 20 years). Ground terminal equipment, on the other hand, gets replaced every 5-10 years. Large Earth station antennas routinely last well over 20 years, but the electronics that support them are replaced multiple times during the antenna’s service life.

Spacecraft design is also conservative — for obvious reasons. The environment is harsh and failures cannot be repaired in situ. When you couple the design time, planning time and service life of a spacecraft, you get to some fairly slow evolutionary timelines. By the time an innovation is proven to be commercially viable (worth the risk), it can easily be a 20 year old idea.

On the ground, the quicker life cycles support experimentation and adoption of the “fail fast” way of innovating. “Let’s try this,” is a phrase seldom heard in the clean rooms and high bays of satellite manufacturers — it’s in common usage in the ground terminal business where the cost of failure is relatively low and the means of recovery are generally at hand. Furthermore, in the ground segment, there are always multiple competitors eager to innovate faster and take more risk.

Mission Microwave tracks the company’s competitive environment closely. In some product categories, there are more than 15 direct competitors. New entrants appear frequently — although many are just working with the same building blocks from Asia and repackaging them under some surprisingly patriotic facades. These competitors constantly try new things to meet
customer requirements.

The innovation cycle is fast, on the order of months versus the years required in the spacecraft business. Mission Microwave has established a top tier position in the market by offering combinations of efficiency and design that exceed the market’s expectations. In some cases, the firm offered solutions that are a quarter of the weight of existing products and more than twice as efficient in power utilization — all at a competitive price. This has enabled ground terminal manufacturers to bring new capabilities to the market. That’s an innovation that supports the increase in capacity in orbit and enables new mobile applications within a tight size, weight and power budget.

Mission Microwave Innovations in RF Power
The mobility market has made a necessity of low SWaP (Size, weight and power) along with increased energy efficiency and reliability. At Mission Microwave, there are two core deign philosophies that satisfy all of these needs and drive the company’s innovation in Block Up Converters (BUC) and Solid State Amplifier (SSPA) designs. Figures 1 and 2 show a portion of the product range produced by Mission Microwave using innovative design and technology.

Premise I — Efficiency and Reliability Are the Same Thing

RF Power efficiency is how much of the prime power gets translated into RF energy. Typical Ku-band BUCs at 100 Watts of saturated power operate in the range of 11 to 17 percent efficiency — most are below 15 percent.

Efficiency equates directly to reliability as well. That 66 percent more energy that the old style BUCs use can only go to one place — heat. Prime power draw gets turned into RF power or it is turned into heat. Heat is the opposite of reliability. Electronics that run cooler run longer and provide a greater “thermal margin” for operation in harsh environments where ambient temperatures can rapid reach 60 degrees C. 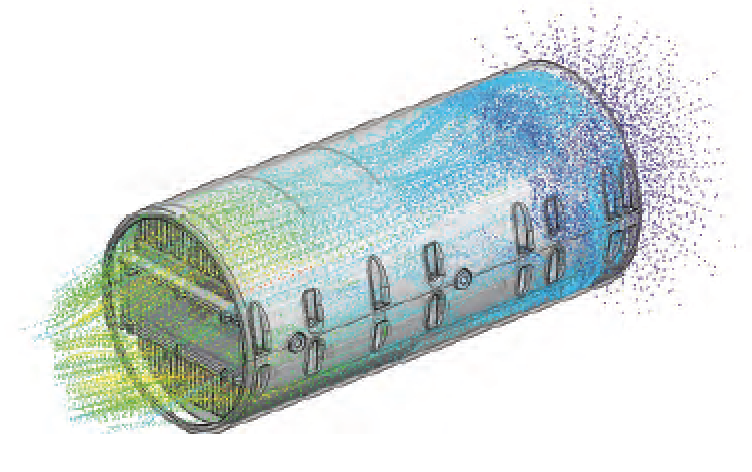 How does one make RF power more efficiently? The secret sauce here is in the ability to get signals from the semiconductor devices and into the waveguide with minimal loss. This is largely a manufacturing problem — to design a system such that it can routinely (and affordably) be produced.

The second aspect is the efficient combining of RF signals. The Gallium Nitride (GaN) devices used in SSPA’s have limited output power. Multiple devices must be combined to reach higher power levels. Mission Microwave’s team leads the BUC industry in the commercial combining of RF signals at Ku- and Ka-band.

Efficient RF designs generate a lot less heat that typical SSPA designs. They still generate a considerable amount of it, and how you manage this heat is the key to the second design imperative we use.

At Mission Microwave, the firm’s efficient RF designs generate less heat per watt of RF power than any other BUCs on the market. The company, then, has less heat to manage. However, that doesn’t mean traditional techniques are used to manage it — Mission Microwave has innovated on that front, as well. Figure 3 shows an example thermal analysis that demonstrated the optimal use of airflow resulting in Mission Microwave’s patented cylindrical design.

Mission Microwave has developed and patented intellectual property on the thermal management of RF amplifiers. The elegant design of the company’s BUCs is derived from an efficiency of thermal design. Designs of thermal conductors and airflow are designed to minimize the amount of size and weight of the products — and the result is the signature cylindrical shaped BUCs and SSPAs with remarkable SWaP characteristics. Example — a 200 Watt Ka-band BCU weights only 22 lbs. (20 lbs .lighter and 15 percent more efficient than its closest competitor).

Terminal Designs Continue to Evolve
Mission Microwave BUCs have made it possible for terminal designers to bring unheard of savings in SWaP to their platform designs. The company has witnessed new, lightweight terminals with integrated BUCs, where previously, the BUC was a separate device that weighed more than the rest of the terminal. The firm’s lightweight products enable new mission profiles as the reduced SWaP required for the BUC can be used for other essential items.

Steve Richeson joined Mission Microwave in 2017 and is responsible for sales and marketing. He possesses 30 years of Satellite and Radio Frequency (RF) experience in engineering and sales leadership roles at Advantech Wireless, Exelis Inc., Harris Corporation, EchoStar, Scientific-Atlanta, GTE Spacenet International, SATCOM Technologies and Schlumberger. Steve is a Senior Member of the IEEE and a Registered Professional Engineer. He earned his engineering degree at Georgia Tech and an MBA at Georgia State University. Contact Steve at...steve.richeson@missionmicrowave.com.