Moog In-Space Propulsion (Moog-ISP) has been supporting the space industry since the 1950s and the company has a rich history in many critical propulsion components and systems. 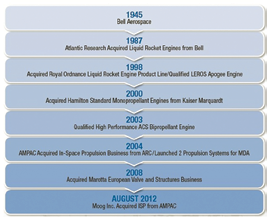 Moog In-Space Propulsion (ISP) History
Moog ISP’s history is drawn from several propulsion businesses, both in the U.S. and Europe, with the origin being the Bell Aircraft Corporation. Bell specialized in aircraft that supported the war efforts in the 1940s. After the war, Bell engaged in advanced experimental projects that included the Bell X-1 that first broke the sound barrier in 1947 and then the follow-on Bell X-2. Bell developed the 16,000 lb. Agena rocket engine which was implemented into the Agena upper stage that was used on Thor, Atlas, and Titan launch vehicles. There were 365 launches between 1959 and 1987 and, to this day, Agena is one of the most reliable rocket engines ever built.

From 1965 to 1978, Bell built more than 1,000 Propulsion System Rocket Engine (PSRE) units as part of the Minuteman III program. The Attitude Control Engines (ACE) developed for this program later became the 5 lb. RCS engines that have been a spacecraft industry workhorse, with more than 2,000 engines delivered and flown. Many spacecraft providers continue to rely on these engines, primarily for geosynchronous spacecraft station-keeping. 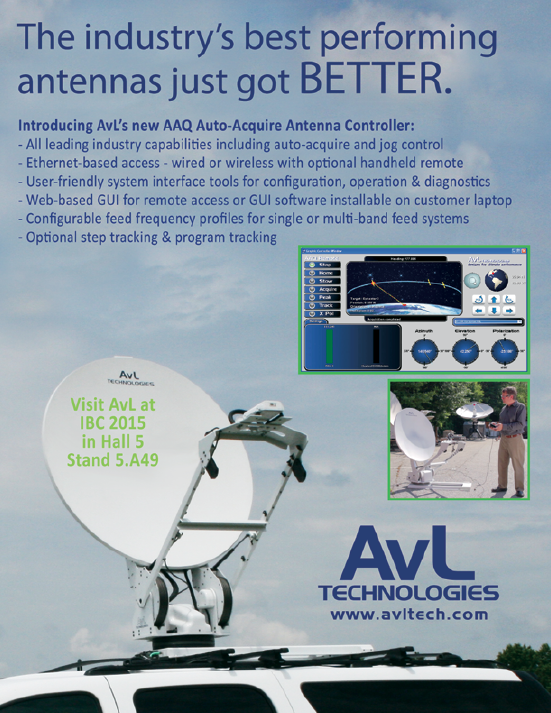 Minuteman III Propulsion System Rocket Engine (PSRE)
In 1987, the Atlantic Research Corporation (ARC) acquired the liquid rocket engine business from Bell, which also included the facilities outside of Niagara Falls, New York. With the acquisition of the Royal Ordnance Westcott facility based in Aylesbury, UK, the monopropellant engines from Kaiser Marquardt, and the internal development of a high efficiency line of Reaction Control System (RCS) engines, ARC expanded its market footprint to cover most spacecraft propulsion applications.

During the same period, Moog, located just 35 miles away in East Aurora, New York, was primarily supporting spacecraft propulsion systems with fluid control components in addition to many propulsion manifolds and complete subsystems. Moog’s fluid control expertise was used in many complicated subsystems including support of spacecraft using electric propulsion for programs such as Dawn and Deep Space-1. 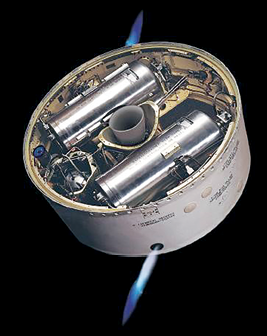 Moog currently operates two facilities that have hot fire capabilities to test rocket engines, big and small. The Niagara Falls, New York, facility is primarily used for production programs—every rocket engine Moog builds is tested with real propellant in a vacuum chamber that simulates space. This includes engines with thrust as small as 1N for RCS applications and as large as 635N for main engine applications, often interplanetary (LEROS engines). The LEROS line of high thrust engines are used on many commercial and military spacecraft.

One of Moog’s 635N engines was used by the MESSENGER spacecraft that recently ended its mission by crashing into the planet Mercury (on purpose, of course). Another Moog engine will be used by the Juno spacecraft to insert itself into Jupiter’s orbit in 2016. The Westcott facility provides production program for U.S. and European customers and has been heavily involved in new engine advances. Engineers are currently developing and testing the next generation high thrust engine for ESA’s interplanetary spacecraft programs. Moog is also supporting the testing of various “green propellants” in both facilities.

Moog is assessing how propulsion can be integrated with other areas of the company. In 2013, Moog acquired Broad Reach Engineering (BRE), which provides complete Integrated Avionics Units (IAUs), including Command and Data Handling (C&DH) and Electrical Power System (EPS) capabilities in addition to a range of specialized payload electronics. The avionics and propulsion capabilities, coupled with other key components like the EELV Secondary Payload Adapter (ESPA), are being leveraged into developing a family of Orbital Maneuvering Vehicles (OMVs). 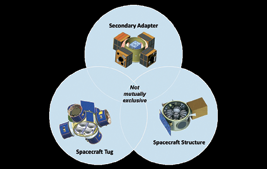 This family of OMVs can be used in a wide variety of mission applications from supporting small spacecraft deployment (including Cubesats), hosted payload applications, carrier/tug vehicles, and motherships for applications in Earth orbit and beyond. In many cases, a combination of these missions can be integrated into a single platform to provide flexible options for space access and operation.

Moog is proud to support the global in-space propulsion industry and continues to develop and support products and technologies that are key to the space industry where performance really matters.
www.moog.com/space

Christopher Loghry is Space Systems Engineer who supports Moog’s Space Sector with his background in spacecraft propulsion. He joined Moog in 2012 as part of the AMPAC In-Space Propulsion (ISP) acquisition. He backs the ISP business in addition to the larger space business divisions. He currently works in the Space Access and Integrated Systems business unit in an engineering role supporting propulsion, launch vehicle and spacecraft missions. 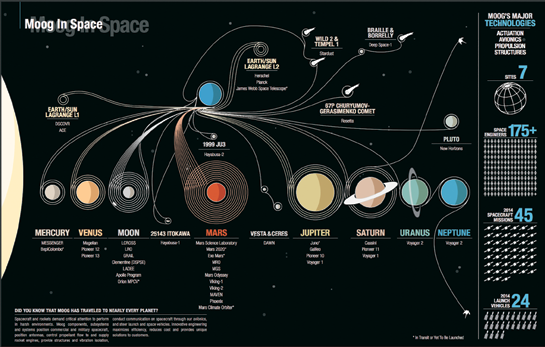