I had the opportunity to participate in the second VSAT Latin America event in Sao Paulo, Brazil, so I thought it would be a good idea to share my takeaways from this regional event.

VSAT Latin America 2014 was organized by Informa Telecoms with the collaboration of Comsys and GVF and sponsored by leading satellite operators such as SES and Intelsat. The event also added the support of global market research firm Northern Sky Research (NSR), represented by myself at the event.

Below are my general and specific conclusions, with specific ones being about the presentations and Q&A sessions that I found most interesting or insightful. Please note that thoughts and opinions are personal and do not necessarily represent the views of NSR, the event organizers or participating companies.

General Conclusions
I found the event quite useful as presentations and Q&A sessions covered well the most critical aspects of the Latin American VSAT sector.

Nevertheless, the event was well balanced and covered other equally-important aspects of the VSAT sector, including the mobile threat to C-band, the intricacies of SATCOM solutions in Oil & Gas, enterprise VSAT trends, the rural opportunity for satellite broadband, wireless backhaul optimization, government-driven HTS and the viewpoints of leading satellite operators like Intelsat, Eutelsat and SES.

Specific Conclusions
With the risk of being unfair with some of my colleague presenters, below are my personal picks of the presentations that I found most useful for my work. I also include a quick summary of my NSR presentation.

Comsys: Simon Bull gave a presentation about the global VSAT sector with historical information about VSAT installations and trends tracked by Comsys. I found Simon´s presentation very insightful and liked the way he profiled each region.

• MNLA no longer talks about nine beams but eight, possibly because of landing right constraints that do not yet allow MNLA to provide Ka-band services over Argentina.

• MNLA adopted a wholesale model for HTS similar to its DTH offering. However, MNLA is not selling “traffic profiles” via distributors. Instead, the entire capacity of each beam is leased to distributors on a per-country basis.

• Given the recent Eutelsat-Hughes deal to deploy 24 Ka-band spot beams across LAM (Eutelsat 65W), the impact on MNLA was an inevitable question. Marcelo said that they expect more announcements like this, which validate that MNLA rightly identified the HTS opportunity for residential broadband. 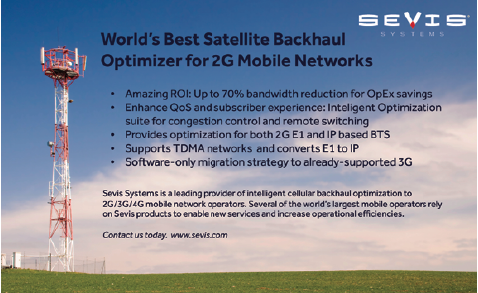 Telebras & Visiona Presentation / Q&A: I was extremely pleased to find quite useful and detailed information delivered by Telebras and Visiona concerning the SGDC satellite program and vision. A visible aspect of this government program is that it is ambitious in terms of technology transfer and Ka-band capacity to be deployed over Brazil to complement Telebras´s terrestrial means to reach unserved, or underserved, Brazilian locations.

The Threat to C-band: Cristóvam Nascimento of Unisat moderated a well-balanced panel with viewpoints from the satellite and mobile sectors. One conclusion is that there are no silver-bullet solutions: Options such as LNB filters or exclusion zones have limitations when it comes to fully avoiding C-band interference. I learned that mobile players are pressing to take this issue to country-level discussions, rather than at a global/regional coordination level, which, in my opinion, is a strategy to organically tip the balance in their favor, given the far stronger lobbying power that the mobile players can exercise on national governments.

Oil & Gas: I really enjoyed Schlumberger´s presentation delivered by Leonardo Toco. It was an eye-opener for me in terms of the wide range of O&G issues and applications and how important it is for this profitable vertical market to count on the support of highly specialized satellite service providers.

HTS Options for Service Providers: I enjoyed Newtec´s presentation delivered by CEO Serge Van Herck about the options that satellite service providers have to transition to HTS. More details about Serge´s viewpoints can be found in a recent SatcomPost interview.

Rural Broadband: I gave an NSR presentation about the digital-divide bridging potential of HTS in Latin America enabled by a wide range of HTS architectures being deployed and planned for the region. Extrapolating the experience from the U.S. is neither easy nor fair, given multi-level differences, but if there is one lesson that the region can learn from the U.S. experience is that the addressable market for satellite broadband could be materially underestimated for suburban locations.

I gave the example of ViaSat´s 2010 experience in U.S. states such as Virginia and Ohio and wondered if something similar could be happening when telecom operators like Oi in Brazil announce reaching additional municipalities with fixed broadband access. The addressable market for satellite broadband is hard to define given that addressability is constrained, not only by fixed broadband availability (not defined granularly enough by official statistics), but also by access speed and the urban-rural affordability gap.

To summarize, this was a useful and refreshing event that gave me the opportunity to exchange viewpoints with professinoal colleagues about important aspects of the Latin American VSAT sector. There are not many satellite events specifically focused on this region so I look forward to VSAT Latin America 2015.

About the author
Carlos Placido is an independent consultant with 20 years of progressive experience in the areas of telecom consulting, business development, engineering and R&D. With focus on emerging satellite markets and technology, he has conducted numerous strategic consulting projects as well as research and management activities, including global market research studies for Northern Sky Research (NSR), business development support for technology vendors and project management at Telefonica. Until 2004, Carlos led a development team at INTELSAT, where he was responsible for identifying and validating future satcom uses of emerging video and IP data technologies. For further information, please visit http://www.PlacidoConsulting.com