In its heyday, the towering metal satellite dish located about three miles from the Jersey Shore’s boardwalks hosted a number of historical moments: the dish tracked the flights of some of America’s first space launches and, in 1960, collected the first images beamed to Earth from an orbiting weather satellite. 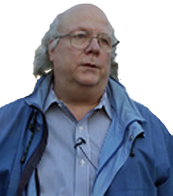 That feat was considered so amazing that the photos were rushed to President Dwight D. Eisenhower, ushering in the era of modern weather forecasting.

After a decade of scanning the skies, however, the dish fell into disuse and became immobilized by rust while weeds grew up around the base and wasps nested in the dish crevices. There the unit sat until four years ago when two Princeton University scientists set out to restore the dish as a way to bring students—both from the University and local communities—closer to outer space.

This spring, the now-functional satellite receiver hosted about 20 Princeton students from an undergraduate physics class who learned how to receive radio signals not just from orbiting satellites but also from astrophysical objects such as dying stars. The dish has also hosted scores of amateur radio enthusiasts and is open to the public each Wednesday and on weekends, when visitors can watch as the massive dish sweeps the sky.

“We didn’t realize what we were getting into when we first decided to take on this project,” said Daniel Marlow, Princeton’s Evans Crawford 1911 Professor of Physics, who led the refurbishment effort with Senior Research Physicist Norman Jarosik. “Luckily we had a lot of cooperation from Princeton’s Department of Physics and the University, along with terrific partners in the community.” 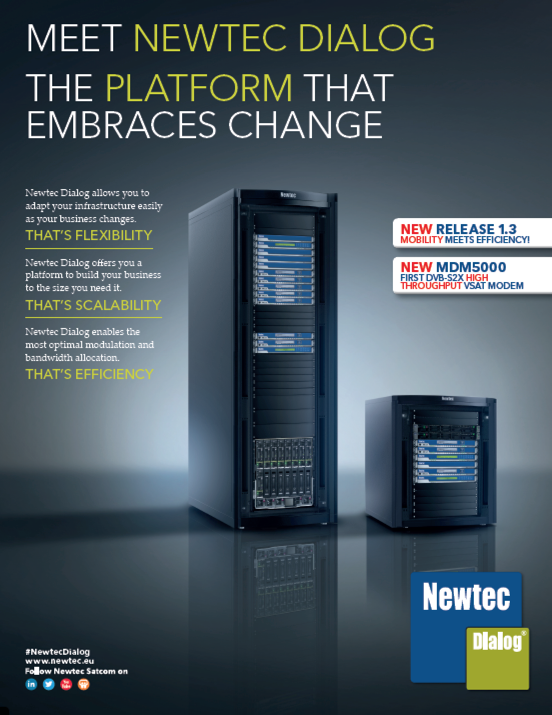 The refurbished dish was activated in the winter of 2015 and was steered to look at a region of the Milky Way. A well-known signal of hydrogen gas in the Milky Way was detected. Soon thereafter, information streaming from weather satellites was intercepted.

Radio waves from dying stars were also detected and the researchers have beamed radio signals to the moon and intercepted them as they came back to Earth.

Reviving A Forgotten Dish
Built in 1958, the dish is 40 miles east of the Princeton campus and occupies the grounds of a former US Army base known as Camp Evans in Wall Township, New Jersey. By the mid-1970s, the dish was considered obsolete and all use was discontinued. The dish might have been torn down if not for the efforts of radio enthusiasts and other volunteers from a grassroots museum in Wall Township called the Information Age Science History Museum and Learning Center, or InfoAge.

The quest to restore the dish originated from Marlow’s desire to build a radio telescope that Princeton students could use to study objects in the universe. A typical home-use telescope works through the lens collecting visible light whereas the refurbished dish collects radio waves. Both visible light and radio signals are electromagnetic waves, but visible-light telescopes need good weather and dark conditions, whereas the longer wavelengths of radio waves can travel through clouds and be detected at any hour.

The dish’s concave shape ensures that radio waves striking the dish surface reflect into a collecting area at the center of the dish called a feed horn. The feed horn processes the signals, which are then funneled via electrical conduits into computers in the control room next to the dish.

The idea to take on the refurbishing of the InfoAge dish—which spans 60 feet across and sits on a base that is 40 feet tall—was derived from a chance conversation between Marlow and Jarosik. 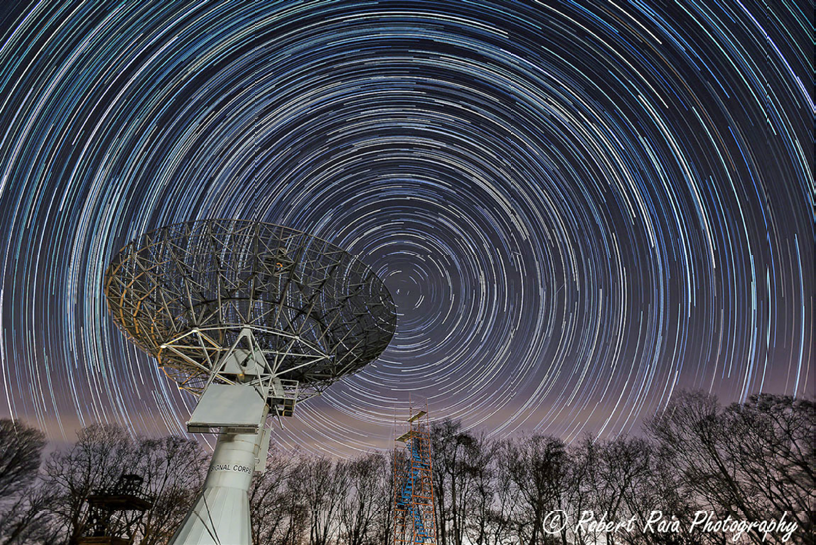 “Dan told me he wanted to build a radio telescope on campus,” Jarosik said. “I told him that there was already a large radio dish sitting idle down by the shore. We decided to go take a look at it.”

Fred Carl, the chief operating officer of InfoAge, didn’t know what to expect when he drove to the dish site to meet with the two Princeton physicists in 2012. “My view of a Princeton professor was a guy in a tweed suit smoking a pipe,” Carl said. “I didn’t expect them to immediately put on safety gear and begin climbing the tower to inspect the dish.”

From the exterior, the dish didn’t look too bad. Thanks to funding secured by InfoAge, the structure had been painted in 2005. But the museum, which survives on donations and volunteer work, didn’t have the resources to do much more than that fresh coat of paint.

Upon inspection, Jarosik and Marlow found that rust had jammed the motor and drive train that tilt the dish vertically. The motor would have to be taken down from the top of the tower and be repaired.

To fund the repairs, Jarosik and Marlow received grants from Princeton’s 250th Anniversary Fund for Innovation in Undergraduate Education and from the University’s Council on Science and Technology, both of which provide resources for the development of new courses.

“Our idea was that non-science majors as well as physics majors would be able to use a working radio telescope,” Marlow said. Additional support came from Wall Township and the Ocean-Monmouth Amateur Radio Club. 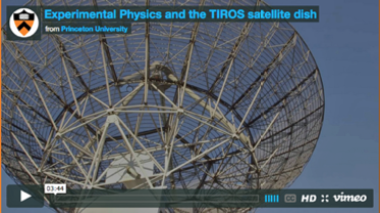 Marlow and Jarosik engaged the help of engineer Geoffrey Gettelfinger, the department manager in physics, as well as department technicians Stanley Chidzik, James Kukon and Richard Soden to help with the task. Princeton undergraduates Nathan Agmon, Class of 2017, and Joshua Wang, Class of 2018, spent a summer developing software to read and display data from the dish.

Just to get the motor down off the tower was a challenge. The Princeton engineers designed a special crane to lower the one-ton motor. The crane had to be lifted piece-by-piece and assembled in place at the top of the dish pedestal. After locating a company that could fix the motor package, the team eventually was able to restore full movement of the dish.

Many small tasks remained: replacing antiquated vacuum tubes with modern electronics, connecting the cables that carry the radio signals to the control room and replacing the feed horn with one that was left over from the dissertation project of another faculty member, Suzanne Staggs, Princeton’s Henry DeWolf Smyth Professor of Physics. 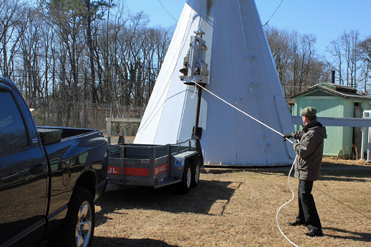 The satellite sits on the former site of US Army base in Wall Township, New Jersey, now leased to a grassroots museum called the Information Age Science History Museum and Learning Center, or InfoAge. InfoAge has supported the restoration and operation of the satellite. In the photo above, Fred Carl, chief operating officer of InfoAge, assists in lowering some of the dish’s machinery to the ground for repair. Photo by Daniel Marlow, Department of Physics.

The Dish Works
Finally, in the winter of 2015, the researchers were ready to try out the dish to see if radio signals from space could be intercepted. They turned the knobs that control the dish and steered it so that a region of the Milky Way was targeted. There they detected radio-wave signals at a frequency of 1420.4 MHz and a wavelength of 21 centimeters, a well-known signal of hydrogen gas in the Milky Way and a sure sign that the dish was operating properly.

Soon they were able to intercept information streaming from weather satellites operated by the National Oceanic and Atmospheric Administration (NOAA). The researchers could also detect pulsars, dying stars that give off regular repeating bursts of radio waves as they rotate. The researchers beamed radio signals to the moon and intercepted them as they came back to Earth.

On January 10, 2016, radio enthusiasts—along with InfoAge supporters, Jarosik and Marlow, who himself is an amateur radio operator—gathered at the dish to commemorate the first such “moon bounce,” which occurred in 1946 on the site of the current dish and at the time was important proof of principle that radio waves could be harnessed for satellite communications.

The dish site has had many brushes with history. In 1914, the Marconi Company—founded by Italian inventor and pioneer of wireless communication Guglielmo Marconi—set up a station for sending transatlantic wireless telegraph messages to a receiving station in Wales. To house the employees who were needed to provide 24 hour service, the company erected a handsome red-brick building with a wraparound porch and sweeping views of the Shark River known as the Marconi Hotel, which today houses InfoAge and other programs.

The US Navy took over the site in 1917 for wartime radio transmissions—in 1941, the US Army became the owner. The military decommissioned the facility in 1993 and, in 2012, the National Park Service made the site a National Historic Landmark. The dish site is now owned by Wall Township and is leased to InfoAge. 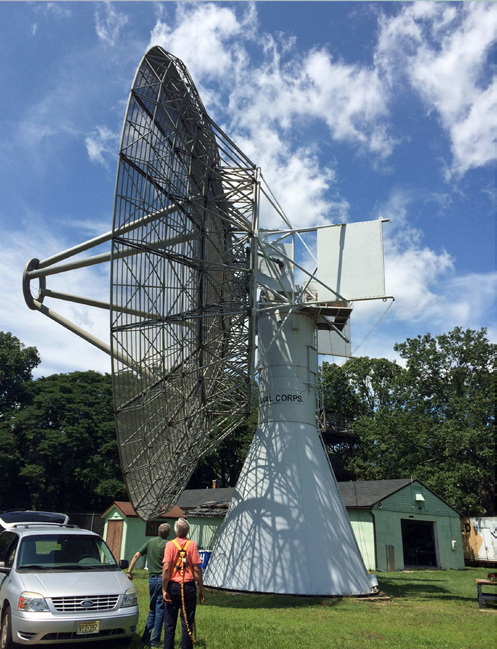 A Large Learning Tool
The restored dish will now be used regularly to teach a new generation of students to use radio telescopes to learn about space. During the spring semester, Princeton students visited the dish as a learning exercise for the course “Experimental Physics” that Marlow teaches for physics majors. Marlow is also designing a course for use with non-majors that will be offered in 2017.

“Princeton is now one of the few universities in the world where undergraduates can operate a 60-foot radio telescope,” Marlow said.

There is no actual need to travel to the satellite dish as remote operation can be achieved from a room in Princeton’s Jadwin Hall. Still, most students take advantage of field trips to the dish where they can experience the scale of the device.

“It is amazing to think that as a junior in college you can do experiments with equipment that has been at the forefront of science,” said Daniel Gift, a Class of 2017 physics major who made the trip to the dish. “The ability to control a huge radio telescope to obtain data for a class assignment is something that is really unique.”

Marlow hopes to be able to bring more students from local high schools to the dish to inspire them to study science and engineering.

“Part of my motivation for wanting to study physics and astronomy is that, when I was a kid, seeing the Milky Way inspired me,” Marlow said. “The refurbishing of this satellite dish provides students with a similar opportunity. This is the sort of thing that a great university can do.”