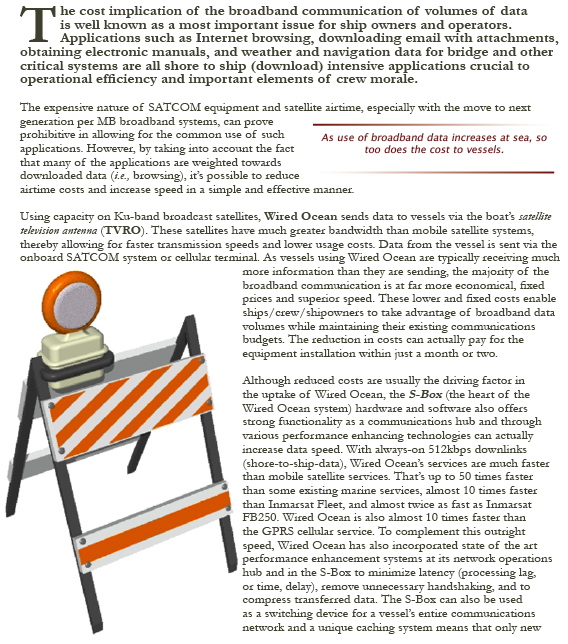 The Wired Ocean S-Box uses a robust Linux operating system and incorporates a firewall and communications encryption. It connects the ship’s computers or network to the Wired Ocean service and seamlessly initiates, manages, and terminates connections as well as simplifying access of the ship computers or network to the Internet, without installing any software on the computers, using a user friendly web-based interface. When considering the limited technical support aboard most merchant vessels, the simplicity of setting up and using Wired Ocean is not to be underestimated as an important driver in the system’s growing acceptance.

The online experience for a Wired Ocean user is effectively the same as that of a broadband user on shore. Browsing, emailing, and so on, are completed using standard applications with no additional software needed. Behind the scenes, however, the Wired Ocean System is providing sophisticated data management:

The S-Box caches previously accessed webpages, and future requests for this data will be served directly from the cache, meaning that they do not become part of billable volume. When outside Wired Ocean’s coverage (currently European and Scandinavian waters, but an expansion to the USA is planned), the S-Box falls back to using the vessel’s dedicated SATCOM to receive data sent to the vessel as well as to send data from the vessel. Using the SATCOM equipment in this mode still makes use of various performance enhancement systems even when not within Wired Ocean’s coverage, so the S-Box still provides value as part of the vessel’s communications network. 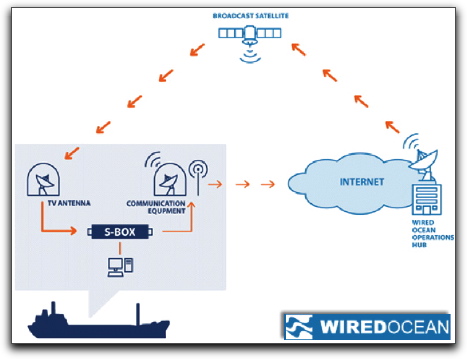 As use of broadband data increases at sea, so too does the cost to vessels. Per megabyte pricing is notoriously difficult to predict, especially when considering multiple users and large downloads, which may include unplanned automatic updates to operating systems or anti virus software. Unexpected downloads could cost $1,000s extra per month, but with Wired Ocean’s fixed pricing, the cost will not fluctuate. By heavily reducing the cost of shore-to-ship data per megabyte Wired Ocean has already enabled vessels to maximise their communications budget. The next step was to provide fixed pricing plans so that in addition to making broadband usage more affordable, there are no surprises in the form of unexpected, prohibitively high bills for downloaded data at the end of the month.

Five fixed price plans, designated Beaufort 1-5, have been introduced to the Wired Ocean service, ensuring that vessels can select the usage profile that best fits their needs. The plans, which are differentiated by the volume of priority data downloaded, start at less than $300 per month. Gigabytes of data can be downloaded for less than $1,000 per month.

All fixed price plans feature a maximum shore-to-ship data rate of 500 kbps, which is faster than many existing maritime broadband services. The new fixed price plans are also available with the cost of the Wired Ocean S-Box, the heart of the Wired Ocean system, included. The benefits of Wired Ocean, such as lower broadband usage costs, faster speeds, and greatly enhanced management of cost, could be achieved without any capital expenditure whatsoever.