The CleanSpace One satellite has a new ally in its mission to clean up space debris. École polytechnique fédérale de Lausanne (EPFL) has entered into a partnership with Swiss Space Systems (S3) and the company will invest 15 million Swiss Francs (CHF) in the project and will launch the satellite into orbit. 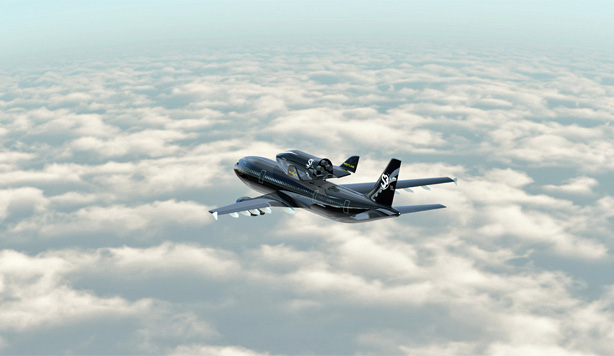 he Zero-G certified Airbus A300 and the SOAR Spaceplane. Image courtesy of Swedish Space Systems.

In 2012, EPFL announced its intention to design and launch CleanSpace One, a satellite whose mission is to start to clean up the thousands of bits of jettisoned rocket and satellite components orbiting Earth at speeds of more than 28,000 km/h. The mission is crucial for the future of the space industry. Now Swiss Space Systems—S3 has now joined the project. The Swiss company is developing a new method to launch satellites weighing up to 250kg and will take charge of CleanSpace One’s launch, which is scheduled for 2018.

A Satellite For Cleaning Up
The debris orbiting Earth continues to accumulate. Although collisions with functioning satellites are rare, each collision can generate several thousand new bits of debris. The problem is becoming increasingly serious and making space missions far more complicated.

CleanSpace One’s mission is to grab hold of a piece of space junk—in this case, an out-of-commission Swiss nanosatellite that measures 10cm on each side—and thrust it into the atmosphere, where it will burn up. Navigating to and seizing the ex-satellite is a formidable feat of engineering. 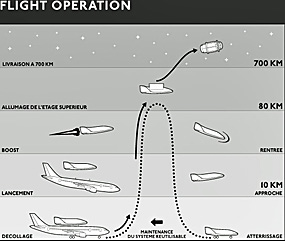 A Three-Phase Launch
S3 is now the Prime partner in this project. The company, headquartered in Payerne, Switzerland, is developing a new launch method for small satellites that weigh up to hundreds of kilograms. A small shuttle rides piggyback atop an A300 jetliner. When the plane reaches cruising altitude, this Suborbital Reusable Shuttle (SOAR) ignites its engines and takes off, upwards. When it reaches an altitude of 80km, it ejects a vessel, which after reaching an altitude of 700km, releases the satellite into Earth’s orbit. The Airbus and the shuttle are reusable and use standard fuels, making the system quite cost-effective.

The goal of this three-phase process is to make space more accessible—it cuts launch costs by a factor of four. To make sure that this doesn’t end up placing even more space debris in Earth orbit, S3 will ensure that all the elements in the chain, including the satellites, include their own re-entry systems. In this context, their partnership with CleanSpace One makes perfect sense.

“You can’t democratize space access without having a responsible attitude,” says Pascal Jaussi, CEO of Swiss Space Systems. “If we don’t deal with the problem of orbiting space debris and its accumulation, future generations’ access to space will be compromised.” 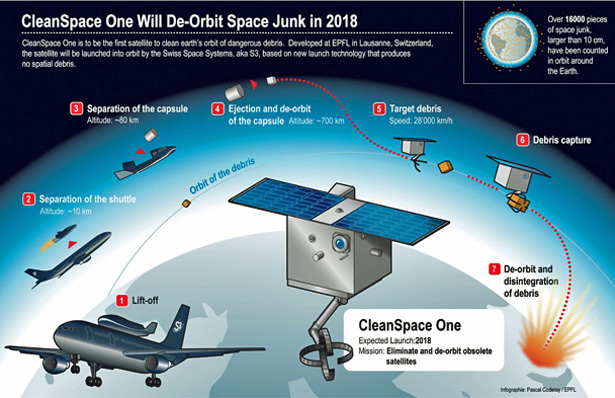 The company will take care of launching CleanSpace One, which in 2018 will be the first satellite launched into orbit using the new method. All told, Swiss Space Systems will invest at least CHF 15 million in the project—CHF 10 million for the launch itself and CHF 5 million for assembling and testing satellite components and ground-based command operations.

On The Correct Track
At EPFL, the project has made considerable progress since the public announcement in 2012 regarding the project. The design is slightly different—it’s a bit bigger than originally planned—and will weigh approximately 30kg. Scientists have tested many technologies that could potentially be integrated into the satellite, some that are already on the market, and others still in the development stages.

Finally, as part of a partnership with the European Space Agency, researchers are developing many key technologies targeting space debris—propulsion, navigation and reconnaissance systems and, above all, a device that can anchor itself to pieces of debris. ETH Zurich, CSEM and the Swiss Universities of Applied Science are participating in this crucial project, as well. They are counting on the integration of their developments into the CleanSpace One project.