July of 2012 will witness the 50th Anniversary of a grand, seasoned lady of satellite communications — Goonhilly Satellite Earth Station in the U.K. Not wishing to pre-empt the many events and publications planned to mark this event by people far better qualified than I, October’s launch of two ground-breaking satellites — namely ViaSat1 and Galileo — has triggered memories of my 35 years of personal involvement with Goonhilly, its management and its staff. Here’s my personal, brief overview of some of Goonhilly’s “Firsts”... 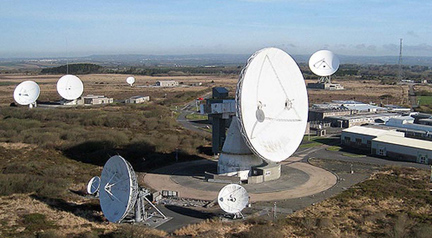 The Beginning
Goonhilly Downs — a windswept, out-of-the-way location on the Lizard peninsular near the Atlantic Ocean in south west Cornwall (U.K.) became a dramatic focal point at the dawn of the satellite communications era. Why? Well, the first communications satellites were totally dissimilar to the complex craft of today. Their power and antenna coverage on the Earth’s surface was quite limited. In order to communicate between the USA and the U.K., for example, it was necessary to locate the USA station as far to the east as possible, and the U.K. station as far to the west as was possible. Goonhilly Downs was ultimately selected for the Earth station and the site was acquired by the U.K. GPO, which later became British Telecom; and then renamed as BT.

Built in 1962 for the TELSTAR experiment, Goonhilly 1 is a 26m, front-fed antenna that set a world standard for the open parabolic design of the dish.

Goonhilly received the first live transatlantic television broadcasts from the United States via the Telstar satellite on July 11, 1962. Since that point in time, Goonhilly grew considerably on its 64 hectare (160 acre), 3.5km (2.2 miles) perimeter site. For many decades, Goonhilly was the U.K.’s main international gateway for all telephone, television and data to and from the rest of the world. 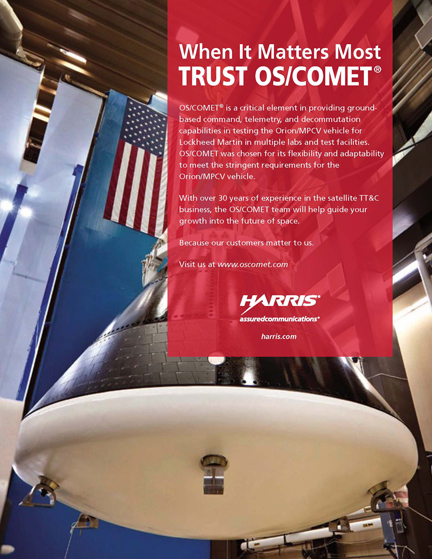 Goonhilly actually started life as an experimental facility to test the feasibility and reliability of long distance satellite communications [Reference: “Goonhilly Revisited” by Donald Wray, Post Office Engineering Department; New Scientist 1 April 1965.], and it was several years before they became an operational Earth station.  Staff were drawn from the GPO’s R&D department, then based at Dollis Hill and the Radio Laboratories at Backwell, where Neil White and several other long serving Goonhilly engineers and technicians originated.  When the site became operational, the development teams were retrained on site under Neil’s leadership, evaluating new ideas, equipment and systems, and then moving them into operations.  They remained active all through Goonhilly’s operational life.

Meeting Goonhilly
For many years, the dominant frequency band used for commercial satellite communications was C-band, with 6 GHz uplinks and 4 GHz downlinks. During the 1970s, the use of L-band for maritime mobile links (1.5/1.6 GHz) and Ku-band (12/14 GHz) for fixed satellite services was being pursued in Europe. Working at the European Space Agency’s ESTEC technical centre in The Netherlands, I was involved in the development of the communications systems for the MAROTS (later MARECS), OTS, ECS and the ill-fated OLYMPUS satellites, with the latter also carrying a Ka-band payload.

The Orbital Test Satellite (OTS) was one of the first three-axis stabilized spacecraft in geostationary orbit (ATS-6 being the first), and the first satellite to carry six, Ku-Band transponders.

In parallel with the work of Dr. R A (Bob) Harris and myself on the 60 Mbit/s, 120 Mbit/s, and 180 Mbit/s QPSK/TDMA systems for OTS and ECS, BT at Goonhilly were doing similar developments in the context of BT’s membership of INTELSAT and what was to become EUTELSAT. It was the Goonhilly team that developed the first U.K. TDMA terminal in 1976, interfacing with a Digital Speech Interpolation (DSI) terminal developed for BT by Cambridge Consultants Ltd. and with a burst-mode modem developed by Marconi Research Labs, again for BT.

With these components, the U.K. successfully engaged in the INTELSAT TDMA/DSI Trial, along with France, Germany, Italy and the USA (Comsat) which lay the operational foundations of this technology. On the basis of experience gained, it was the Goonhilly team that set up and ran our hardware simulation laboratory at ESTEC (under contract to ESA).

In the late 1970s, I was carrying out the in-orbit testing of the OTS Ku-band transponders from Telespazio’s Earth station at Fucino (Italy). Goonhilly was actively working with the OTS satellite using their Goonhilly 4 antenna, which was one of the first Ku-band terminals in Europe. 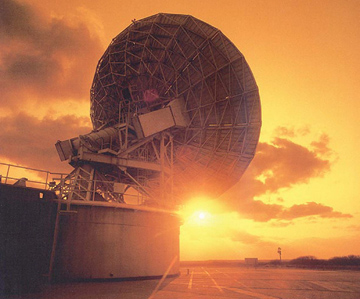 It was definitely part of the testing strategy for Goonhilly and Fucino to exchange TV recordings of popular soccer matches — in order to check transmission quality, of course!

Later, I was part of the ESA team planning the ECS IOT testing and negotiating with EUTELSAT for the transfer of the ECS satellites from ESA to EUTELSAT. Goonhilly again played its part in a number of ways and some of the key meetings were hosted by BT at Goonhilly.

Working As A Supplier To BT @ Goonhilly
After leaving ESA and returning to the U.K., I was foolhardy enough to start my own business in the satellite communications area — Communication Systems Research Ltd. (CSR). The company operated at the bleeding edge of software, firmware and hardware development, and BT was one of the company’s customers. Here are but some of Goonhilly’s “Firsts” that CSR was involved with.

Starting in 1982, the U.K.’s INMARSAT coast Earth station (CES) was Goonhilly, operating through Antenna 5 with C-band between the CES and the satellite, and L-band between the satellite and the mobile terminals. With the extensive expansion of services for Maritime, Land and Aeronautical applications, antennas 14, 24 and 25 were added to work via the AOR (Atlantic Ocean Region) East and AOR West satellites, as well as the IOR (Indian Ocean Region).

For small mobile terminals, exceptional frequency accuracy and stability of the downlink signals is essential. Correction has to be made for a variety of effects, not the least of which is Doppler-shift due to satellite movements. Based upon its phase-locked receiver technology, CSR developed and produced such pre-compensated AFC systems for, among others, the Goonhilly CES.

BT, through Goonhilly, achieved a first with the Aeronautical services which were launched in 1989 with SKYPHONE. These services were acquired by major airlines including Virgin Atlantic, British Airways, Lufthansa, Lauda, Austrian, Singapore Airlines and others.

Under contract to BT, CSR developed the CES-based SKYPHONE modem that carried voice, fax, and data services to passengers and crew. Racal Ltd, with their airborne equipment and flight qualification experience, developed the airborne modem.

CSR’s complicated 10-layer-board, DSP-based modem used voice codec technology developed in BT’s research laboratories at Martlesham Heath. What is really worthy of note is that Racal and CSR carried out their modem developments entirely independent of each other, but based upon a three-inch thick specification document produced by INMARSAT. The very first time the two modems established a link and “talked to each other” was in a live trial between Goonhilly and an aircraft via an INMARSAT satellite. Incredibly, it worked the first time! Now, that is a tribute to INMARSAT and to BT’s project group.

Changing Times
Times and technologies change — since the late 1990s, fibre optic cable has predominated in the trunk transmission of international traffic, making Goonhilly less and less critical for BT’s operations. As a consequence the site was gradually downsized, then eventually mothballed, and is now scheduled for demolition.

One sometimes hears criticism of BT for the decision to pull out of Goonhilly, but I hold a contrary view. Personally, I believe that had BT so wished, on purely commercial grounds it could have implemented that decision much, much earlier than it did. So, good for BT! 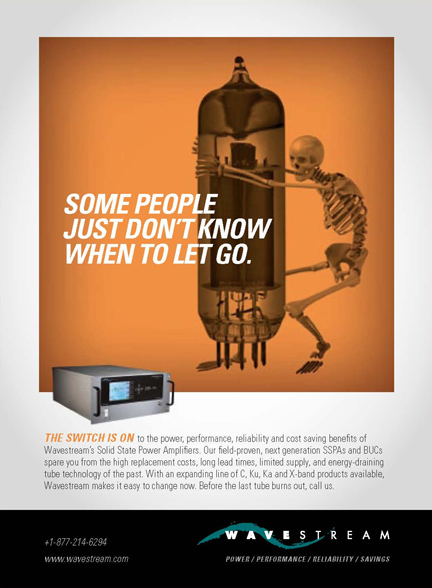 Total demolition has not occurred at Goonhilly and nor is such expected. Certainly, the original Goonhilly 1 antenna has been the subject of a Preservation Order since 2003, being deemed part of the U.K.’s heritage. The 29m Goonhilly 3 C-band antenna followed suit in 2008. Further, BT has entered into agreements with other parties that will lead to a rebirth of the Goonhilly complex.

Goonhilly’s Rebirth
Not only does Avanti PLC have one of its HYLAS 1 Ka-band satellite Earth stations (equipped with a Hughes Network Systems hub) on a small part of the site, but a new company called Goonhilly Earth Station Ltd. (GES) has been formed with the aim of transforming the remainder of the site.

GES plans to turn Goonhilly into a center of excellence as an International Space Communication Gateway for commercial satellite communications, Space Science (Deep Space communications) and Radio Astronomy. Apparently, the company has agreements in place to upgrade the still-serviceable antennas for deep space communications, and to create a commercial space communications gateway. It appears as though the plans also include a co-located business center, training and a visitor center, which could generate as many as 750 jobs in the region. The concept, developed and led by Ian Jones of GES Ltd (www.goonhilly.org) is backed by the Universities of Oxford, Leeds and Herts, as well as QinetiQ and other institutions.

Meanwhile, it’s “business as usual” for the existing and future SATCOM activities and contracts at the Goonhilly site.

In 50 years, Goonhilly has moved from an experimental facility working a tiny C-band satellite in low Earth orbit to a site hosting a modern operational Ka-band system with plans to reach into deep space and the stars. Now, that’s what I call a rebirth!

About the author
Bob Gough has spent more than 35 years in the satellite communications business, both with the European Space Agency and in Industry. In 1980 he was one of the first six staff members of Filtronic PLC, which grew to be a multi-billion dollar public company in the mobile communications business. Bob was Marketing and Sales Director and instrumental in opening up the company’s U.S. market. In 1982, Bob founded a successful satellite communications equipment manufacturing company with an international customer base. That company was acquired by a major U.S. Defense contractor in 1987. He has also held senior management positions in publicly listed computer & communications companies. In 1990, he founded Carrick Communications Ltd. Also in 1990, Bob co-founded a software company which became the leading provider of operational planning and timetabling systems to railways on every continent. That company was acquired by a major German engineering company in 1999, and Bob still retains strong links at senior levels in the railway industry. Bob possesses in-depth technical, commercial, business development and management experience that is brought to bear on the projects undertaken by Carrick Communications. Bob Gough, BSc (Hons), PhD, MIET, CEng is a Chartered Engineer and a Member of the Institution of Engineering & Technology. 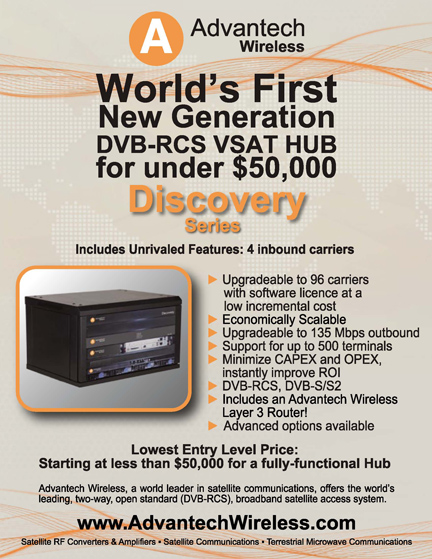