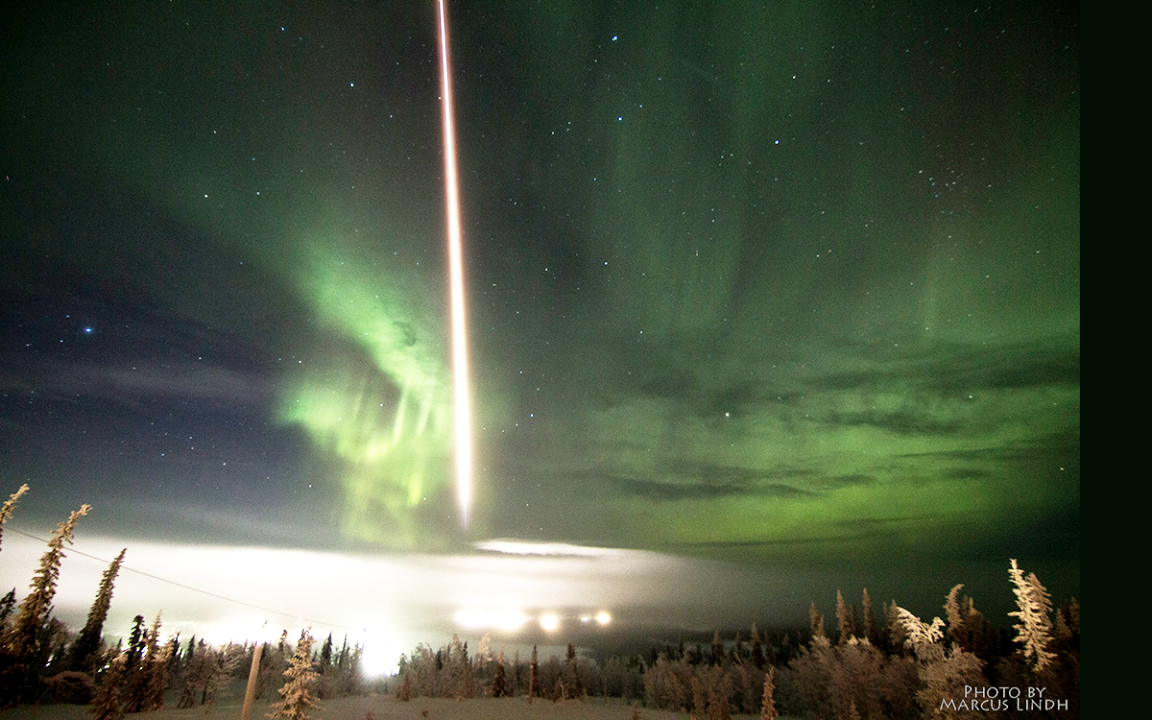 The launch of the SPIDER-2 single stage rocket by SSC from Esrange Space Center.

Late February, close to midnight, a blast successfully sent off the one-stage rocket experiment Spider-2 from Esrange Space Center in northern Sweden. All previous attempts had been cancelled due to combinations of poor weather conditions, moonlight disturbing the optical instruments and, most of all, the absence of Aurora Borealis, the central figure of the mission. Finally, the launch conditions were perfect.

Named by Galileo Galilei in 1619, Aurora Borealis, or northern lights, has long fascinated mankind. Every year, thousands of visitors travel to the northern hemisphere to get a glimpse of this luminous spectacle which is the result of disturbances in the magnetosphere caused by solar wind. 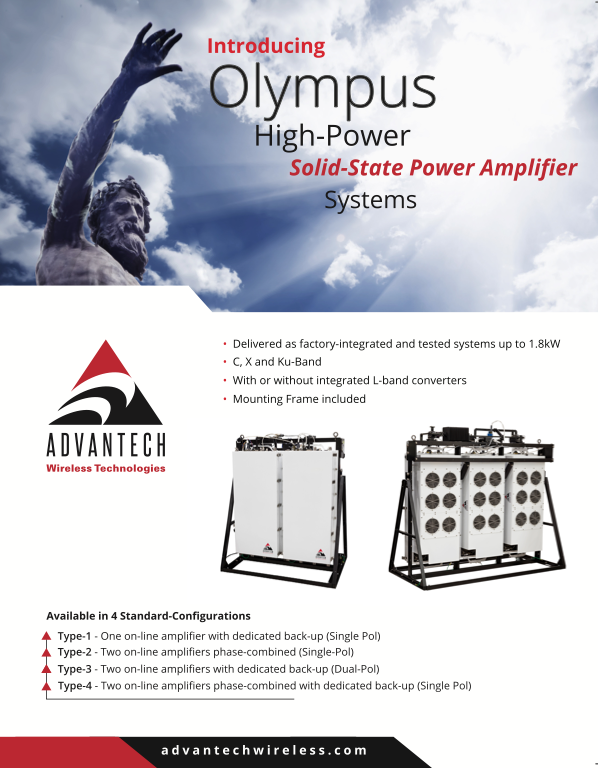 Not surprisingly, scientists are still very interested in this phenomenon. The interest was more than usual this February night as a team is on a mission in northern Sweden to gather data from within the northern lights in order to, among other things, study the processes that interact and interfere with radio and GPS signals. What went on in the skies above Esrange that clear, winter night?

Once launched into the Aurora Borealis, 125 kilometers in space, the Spider-2 rocket ejected twelve, free-flying, measuring units in different directions, simultaneously creating a multi-point system registering data in the volume of the Aurora. This data will provide a huge amount of information, for example, on the plasma physics processes within the Aurora — project scientists will be able to work on this data for years to come. The science team is specifically targeting a process called Farley-Buneman instability, among other plans.

After collecting data, the instruments re-entered the atmosphere in free-fall, finally sailing slowly down toward Earth in parachutes for the final five kilometers, landing in the snow of the vast area surrounding the space center.

As for all projects, it was a relief to see everything worked as it was supposed to during the flight... perhaps even more so this time around, due to all of the launch constraints on a mission such as this one. The weather conditions had to be perfect, both for the actual launch as well as for the recovery process of all of the instrumentation. Additionally, launch was only possible during the new moon phase so as not to saturate the optical instrumentation. Lastly and most importantly, SSC also needed an actual northern light of the correct type to appear at the right time and in the nominal trajectory or flight path of the rocket. The company waited for weeks for this to occur and then, at the last possible opportunity, all rose into place, much to everyone’s relief.

An Extensive Localization Process
Retrieving the payload after landing may not sound like a big deal and, usually, it is not. The tricky part on Spider-2, however, is that there is not only one big payload to locate, but also 12, tiny instruments spread over the vast, unpopulated, snow-covered forest and mountain area surrounding Esrange. 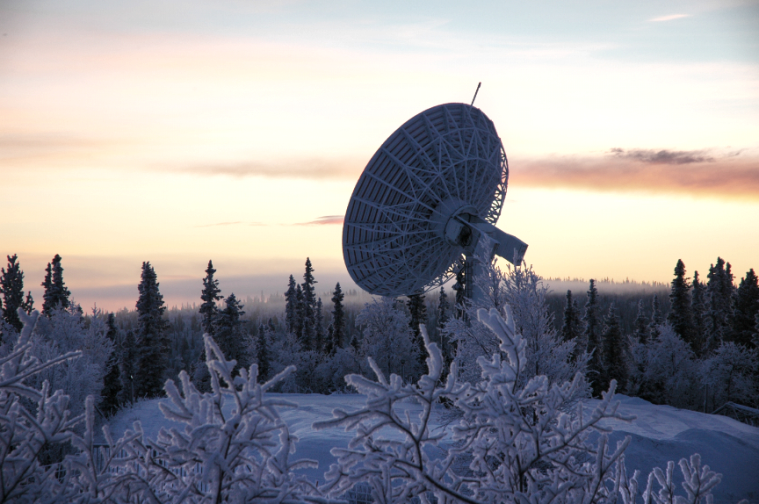 Several techniques were used to transmit all individual units’ final GPS-positions. Even with a perfect fix, these small devices are challenging to find in the terrain. If there should be any issues with the positioning systems, as occurred during Spider-2, there is normally no back-up available. This time, however, the team had introduced an innovative passive system as extra back-up and, with some detective work, before scanning the landing area, nine of the 12 ejected units were recovered, and that is considered a great success.

For the science team, it is a huge difference to be able to collect data from as many units as possible in order to obtain the multi-point data set they are looking to examine. As for the three remaining units, there is still time and hope. The measuring units’ data storage can survive for extensive periods of time and, when found, will most likely be intact. If they are not found in upcoming, active scans of the area, they might still find their way home during the summer season when the area is occupied by hikers, as all of the devices are tagged with contact information.

Life on Earth Benefits from Space
Helping scientists understand the secrets of the Aurora Borealis is, one might say, just another day of work at SSC. Spider-2 is only one of many space operations conducted by the firm that aims to find new ways of using space to facilitate everyday life and to develop societies around the globe.

Since the first rocket was launched in 1966, Esrange has grown to be Europe's largest, civilian, space center. While industry needs continue to grow, SSC aims to expand further, creating new capacity for launching opportunities in Europe. The company is currently working to establish a test bed for tests of reusable rockets, as well as developing the ability to launch smallsats by 2021.

The arctic location of Esrange Space Center also means an advantageous position for communicating with polar-orbiting satellites. Meanwhile, it is also one of the world’s largest civilian satellite ground stations, acting as hub for SSC's global satellite station networkthat includes Canada, Alaska, Hawaii, Chile and Australia. Consequently, the space center in northern Sweden has — for more than 50 years — been an attractive hub for the exploration of immediate space and that helps to make life on Earth the beneficiary of various spatial opportunities.

Photo of the Esrange Space Center.
Photo is courtesy of SSC.

Since the company’s establishment, Esrange has been the scene of 572 rocket launches and 649 balloon releases. Add to that the many years of managing and downloading data from satellites to provide valuable information to researchers and enabling various data driven functions of society and SSC adds great value to the European space industry.

Using space technology for Earth Observations (EO), scientists from all over the world get access to huge amounts of valuable data, not the least of which are for environmental purposes, where a global overview from satellite data might prove to be crucial for continued human existence on Earth.

Esrange is considered one of the world's most versatile space centers. Today, it is home to a wide range of space operations —launching sounding rockets for microgravity and atmospheric research, releasing high altitude balloons for astronomy as well as executing drop tests of space and aerial vehicles, to name but a few capabilities.

By extension, all of the projects SSC is involved in have the same purpose — to make life easier for the citizens of Earth. Space research, such as the northern lights project, helps tofrmulate new insights on how processes up there in spae affect all down here on Earth. This, in turn, creates a foundation for societies to continue to evolve. That is how SSC helps Earth to benefit from space.

Spider-2 is a scientific rocket project within a program funded by the Swedish National Space Agency for Swedish balloon and rocket activities from Esrange. Spider-2 kicked off in 2018 and is a scientific collaboration between Swedish and German scientists from the KTH Royal Institute of Technology, Stockholm University, Swedish Institute of Space Physics of Stockholm and the Leibniz Institute of Atmospheric Physics.