Norway’s Telenor is a telecoms giant and is making steady progress beyond its home borders. The Company has a few telco-based challenges in places as far away as, for example, India. The company delivered its latest numbers on May 8th. 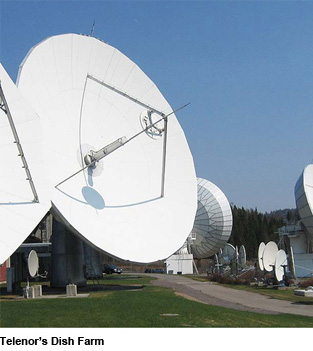 However, Telenor’s non-telco division (carried under the umbrella Telenor Broadcast Holdings vehicle) now generates 7.2 percent of Telenor’s overall revenues and seems to be doing very well. In total, Broadcast Holdings brings in a more than useful 915m euros in revenues (in 2011) and has, among other activities, close to 1.8m DTH payTV subscribers in the Nordic region served via the Canal Digital brand on DTH and cable, plus another 2.27m in Central/Eastern Europe.

Some 17m homes in total receive TV signals from the 1 degree West slot (a spot Telenor shares with Intelsat). Telenor Satellite Broadcasting (TSBc) operates the infrastructure for Canal Digital as well as the region’s public and commercial broadcasters (about 8.4m Nordic homes, 9m Central/Eastern European homes) and carries more than 700 TV channels, only a few dozen of which are in HD (and now the first 3D channels are on air). In other words, the growth potential for switching from SD to HDTV is considerable.

The Company’s national TV transmission arm (Norkring) has a valuable contract in place to build and equip DVB-2 networks for Flemish customers (North of Belgium) plus the region around Brussels, and is looking for similar contracts elsewhere. Norkring looks after FM, AM, DAB and TV carriage throughout Norway. 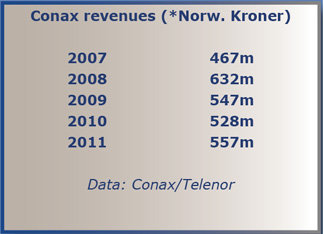 Telenor’s TV encryption arm, Conax, is in an enviable position, with some 300+ global customers (as well as its own Canal Digital payTV sister-company) with anti-piracy software and so-called ‘smart cards’. Indeed, Conax’s future road map, as explained by CEO Morten Solbakken, seems to be more than comfortable about matching its larger rivals (NDS and Nagra Kudelski) with up-to-the-minute technical solutions for its clients. This year sees the Company supplying advanced OTT support, access for ‘smart’ phones as well as the other bells and whistles now accepted as normal within the payTV environment. Multi-screen delivery of secured content is a major thrust for Conax and its clients, although it is looking to develop (or improve) on simpler pre-integrated solutions for some of its applications.

For example, Conax will announce a new ‘partner’ program at the giant IBC trade show in September. Solbakken, who has been in post since only September last year, has clearly hit the ground running with his team and says the 80 country spread of clients (including ultra-low ARPU customers, such as India’s Dish TV) secures content for some 125m subscribers—and, they are growing their territorial spread. New offices are opening, including Sao Paolo, where he said Conax sees “huge growth potential” and where the Latin American market is of “key” interest. 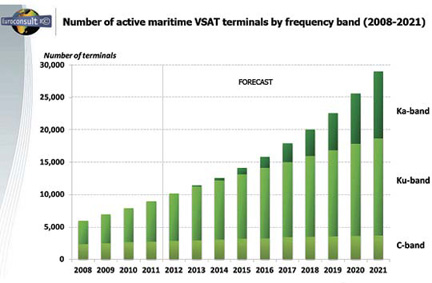 Conax’s geographic revenue split sees some 50 percent being generated in Europe, 25 percent from Asia (mostly Dish TV), around 15 percent from “the Americas,” and MENA contributing around 10 percent. Out of that mix they have some valuable contracts: KPN Netherlands (1.4m subs), Cablemas Mexico (3m), ComHem in Sweden (1.8m) and Russia’s Orion Express (around 6m). Recent new contract ‘wins’ include Biznet Indonesia (400,000), AVG Vietnam (potentially 17m homes), Claro Ecuador (1m), and ICHD out of Dubai (potentially 10m). Five new contracts have been secured this year: KCCL India for CATV, Access Haiti for DTT, Valaiscom AG Switzerland for DTT, NHK/JSTV for a Japanese DTH service for ex-pats, and Gorod TV Russia for their cable service.

Solbakken pulled no punches in saying that Conax was confident of announcing five additional “major” deals in the next two to three months. Also, part of the overall road map is to tap into the growing opportunities for Conax in emerging markets where the digital dividend is only starting to develop.

However, Conax’s EVP/Products Tom Jahr issued a warning to broadcasters, consolidators and the industry in general, saying that ‘Smart’ and ‘Connected’ TV services were wonderful, but they placed extra pressures on security—“Search engines, VOD, catch-up, all carry a risk”.

He said the fast-changing world of television also means that clients would no longer be prepared to wait three years for a secure solution to be developed, and that Conax was working to see these sorts of problems solved in perhaps the next eight months.

News emerged during a recent press briefing that Cato Halsaa, TSBc’s CEO, will retire next year. He will leave with a solid record of achievement, not the least of which was the re-generation of a division that, not so many years ago, was widely reported to be on the sales forecourt.

That division is now a vibrant member of the satellite operating community. He supervised the ordering of the Thor 7 from Space Systems/Loral, which will take its multiple spot-beams and high-throughput Ka-band to the next level to satisfy the fast-growing demand of maritime and related services with coastal and marine coverage spreading over the North Sea, Red Sea, Baltic Sea, Persian Gulf and Mediterranean.

Thor 7 will expand TSBc’s 11 transponder Ku-band capacity in particular for Central/Eastern Europe. Arianespace will launch Thor 7, hopefully toward the end of next year (winter 2013-2014). TSBc is also tapping into the current low premium interest rates available for Arianespace launches. 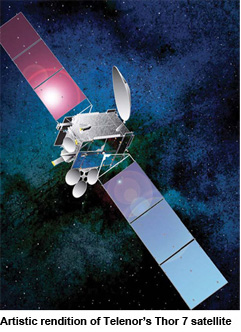 Halsaa explained that TSBc’s strategy was simple enough: continue to grow, expand the datacomms market, maintain strong efficiency and customer satisfaction levels as well as add more HDTV, perhaps more 3D and, sometime in the future, see the introduction of Ultra-HDTV. Add in a growing demand from play-out and IPTV, VOD and ‘Tablet TV’ and there’s a solid business road ahead.

TSBc is also expanding from its adjacent 4 degree West slot where it holds absolute rights to 40 frequencies. Telenor 3 has been at that slot operating in inclined orbit for some time and it can perform a role for the next seven to eight years. This is more than enough time for either an existing satellite to be relocated to 4 degree West when replacement capacity is available, or—although nothing has been said—a new craft could be procured. However, at the top of Halsaa’s list is finding customers for the 4 degree West position. Currently, it has a solid client base spread amongst top-quality names, and Halsaa is quietly confident that these will grow.

1 degree West (from both Telenor and Intelsat capacity) has carved out a terrific niche in terms of Occasional Use demand, helped by high-profile events such as last year’s U.K. Royal Wedding, and events such as the upcoming Olympics (where Halsaa says TSBc has been fully booked for the opening day’s activities). Sadder events such as the Oslo shooting outrage, and the trial that is now taking place, have also generated massive OU demand (profits from this coverage are being donated to Norway’s Red Cross). TSBc also succeeded in winning a useful three-year contract from Germany’s WDR (part of ARD/ZDF public broadcaster) for OU capacity, and where 80 percent of the capacity is fed through TSBc, with the remainder spread through suitable third party capacity suppliers, such as SES and Eutelsat.

About the author
Contributing Editor Chris Forrester is a well-known broadcasting journalist and industry consultant. He reports on all aspects of broadcasting with special emphasis on content, the business of television and emerging applications. He founded Rapid TV News and has edited Interspace and its successor Inside Satellite TV since 1996.  He also files for Advanced-Television.com . In November 1998 he was appointed an Associate (professor) of the prestigious Adham Center for Television Journalism, part of the American University in Cairo (AUC), in recognition of his extensive coverage of the Arab media market. 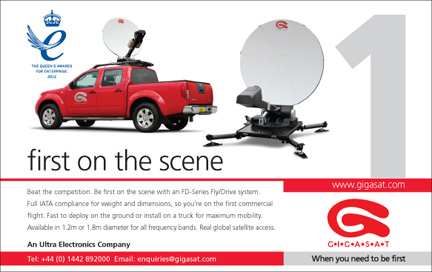