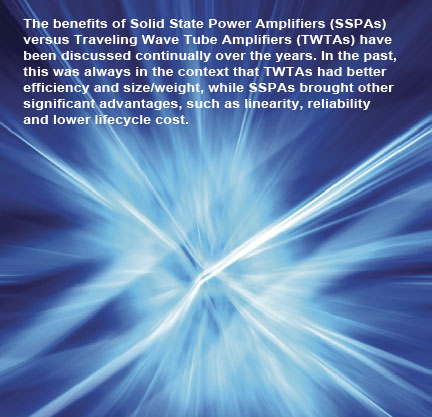 The choice between SSPAs and TWTAs was made more difficult because, although SSPAs offered many reliability and application advantages, they had one fundamental drawback: poor efficiency and size/weight. Therefore, the engineer had to make a tough call: In order to obtain the higher efficiency and compact size/weight of TWTAs, they had to live with all the burdensome idiosyncrasies and costs of this vacuum tube-based technology.

However, progress marches on — over the years, the efficiency “gap” between TWTAs and SSPAs has continued to shrink. Recent advances in SSPA efficiency have brought them into parity with TWTAs in Ku-band, making SSPAs ideal for replacing TWTAs in Ku-band communications systems.

The new, more advanced SSPAs offer enhanced reliability, eliminating tube replacement and other maintenance costs. Also eliminated are high-voltage power supplies, eliminating an unusual, unreliable, (and potentially lethal) component, which, while in widespread use in the 1950s, have now become very rare and hard to source, subject to unexpected obsolescence.

In addition, recent advancements in efficiency gains make SSPAs safe to operate at full power into highly reflective loads, eliminating a source of potential failure common to TWTAs and older SSPAs. Engineering designs have also moved forward to increase high immunity to shock and vibration, significantly expanding to SSPA the potential use of SSPAs. 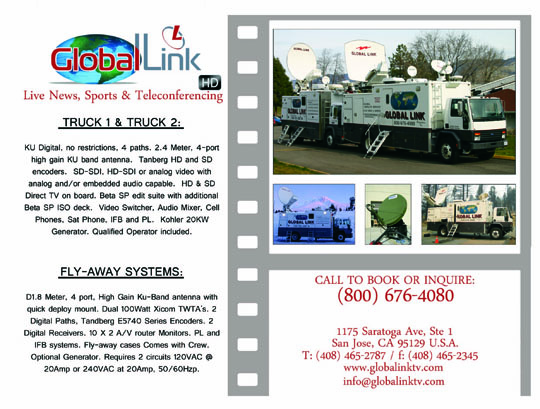 Linear Power: Comparing Apples and Oranges
The performance characteristics of SSPAs and TWTAs look quite different. Frequently, the question arises: How do we select and/or specify an SSPA in order to retrofit/replace a TWTA? In most cases, a TWTA can be replaced by a SSPA that is more efficient.

s In general, for a communications application, the TWTA cannot run at “full power,” because doing so will cause a significant amount of distortion due to the non-linearity of the TWTA. This distortion may cause errors in demodulation and/or cause the transmitted signal to violate restrictions on spectral regrowth, generating interference in neighboring channels. Therefore, in order to meet these various restrictions on distortion, the TWTA transmit power is reduced by decreasing the modem signal level until it reaches a lower power level (often called a “linear power”) at which it meets the maximum distortion limits. This “linear power” is generally far below the much higher nominal power of the TWTA.

In contrast, a SSPA typically will have significantly better linearity than a TWTA, and so may be operated at little to no back-off while meeting the same restrictions on distortion. Therefore, a much smaller SSPA may achieve the same “linear power” (i.e., usable transmit power in practice) as a TWTA of much higher power. A typical rule of thumb is that a SSPA can achieve the same linear power as a TWTA of two to three times higher saturated power.

The very pleasant side-effect of operating at lower back-off is that you can use a much smaller SSPA to replace a larger TWTA, and therefore your weight, size and power consumption are much better. Consider the below table, for example, which compares the size/weight and power of an Integral Systems’ 200W SSPA against a typically much larger 400W TWTA (rated at 350W at the output flange), both in Ku-Band (13.75-14.5 GHz).

Note in particular the power consumption in the aforementioned table. Due to the poor linearity of TWTAs, in practice they cannot be operated in their high-efficiency, saturated mode, but must be backed way down to a much less efficient linear mode. While backing down the RF power level, the RF output decreases, but the power consumption stays roughly constant or decreases at a much slower rate than output power, so the practical achievable efficiency for a TWTA in a communications application is much lower than the theoretical efficiency it achieves when operated at full power. As a result, the 200W SSPA delivers the same linear power as a 400W TWTA at a much lower power consumption (and consequently lower heat generation); in the above example the SSPA’s draw is 870W instead of the TWTA’s 1400W.

Ultra-Fast Mute (Power Standby) Capability
A unique feature available on certain SSPAs is ultra-fast mute/unmute (power standby) capability. Whereas TWTAs, based on vacuum tubes, have long warm up times (on the order of minutes) and so are typically operated in an always-on mode. This means they are constantly drawing power at their full rate. 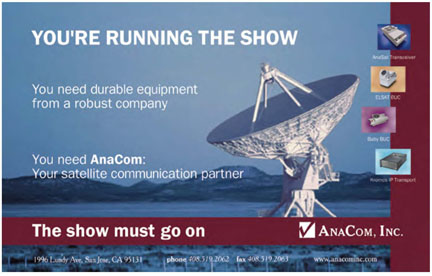 For example, using the ultra-fast mute/unmute capability in a typical Integral Systems’ SSPA, the SSPA can be shut down in 20 nanoseconds and can come on and reach stabilized gain in 80 nanoseconds. In the muted state, the power amplifiers and drivers are shut off — power consumption goes to near-zero.

This ultra-fast standby capability offers new possibilities for power savings and heat reduction. Especially for TDMA systems, it is possible to mute the amplifier between bursts. While it would be unimaginable to shut down a typical TWTA in-between bursts of a TDMA signal, with turn-off/turn-on times in the nanoseconds, an Integral Systems’ SSPA may be called up from a ultra-low-power-consumption sleep state and stabilized to its normal operating gain in a small fraction of the duration first bit of a packet preamble, then switched off immediately after the last bit is transmitted. As a result, dramatic power savings are possible. If a transmitter is only operating at 20 percent duty cycle, then power consumption can be reduced by 80 percent, as the SSPA may be turned off for 80 percent of the time. In many cases the pulse repetition frequency is high enough that this switching is not even seen as a variation in power draw; internal capacitors hold the power rail during pulses, so all that is observed externally is a continuous, smooth power draw which is far lower than the normal un-muted power draw.

Even in non-TDMA systems, the ability to instantly awaken the SSPA allows many power-saving operation modes where the SSPA is automatically put in standby on any occasion where it’s not actively transmitting data, then instantly re-activated whenever it’s called back into service, resulting in great power savings. For 1:1 redundancy systems, the unused unit may be left in muted mode, saving half of the power for the system, since the unit can be un-muted and ready to transmit in much less than the time it takes for a waveguide mechanical switch to flip.

These power savings due to both the high efficiency and ability to put in low-power standby, also make the SSPA a greener solution, reducing lifetime operating costs and electrical consumption, especially in larger teleport installations.

Integral Systems’SATCOM Solutions division has released a new series of Ku-band SSPAs extending from 25 to 200W output power. Higher power levels are also available as custom products. These products offer an unprecedented combination of small size and efficiency, equaling and/or surpassing the efficiency of typical TWTAs.

The Company’s next generation of SSPA products have made dramatic efficiency and size/weight improvements so they now equal or exceed TWTAs, which were formerly TWTAs traditional areas of strength (when compared against older models of conventional SSPAs that typically have under 10 percent efficiency in Ku-band).

For example, the Integral Systems’ Ku- product line achieves typical saturated efficiency ranging from 30 percent for the lower power amplifiers to 24 percent for the 200W product. Also, size/weight is much smaller than older SSPAs, ranging from three pounds up to 23 pounds for the 200W in the component configuration, and five to 33 pounds in the outdoor configuration with power supply and cooling.

For example, in Table 1, note that the 200W Ku- SSPA draws under 900W, typical when operating at linear power, in an ultra-compact 23 pound package that is sized at only 12x11x3.5 inches. This is comparable to a 200W TWTA of the same saturated power, allowing a direct drop-in replacement with little or no increase in power draw, weight or size.

All of the arguments traditionally made in favor of SSPAs over TWTAs also apply to these new ultra-efficient SSPAs. One common rule of thumb often cited is that, for linearity-sensitive applications, a SSPA can replace a TWTA with two to three times more saturated power while achieving the same linear power output. In the past, these arguments were made by SSPA manufacturers to offset TWTA’s advantages in efficiency. In the case of Integral Systems’ ultra-efficient SSPAs, these arguments still apply, but since we are starting with an amplifier whose efficiency and size/weight is equal to TWTA’s, the superior linearity allows us to replace a TWTA with a SSPA that is far superior in power consumption and size/weight.

Reign Reigned In
The reign of TWTAs as the highest efficiency power amplifiers has come to an end. New 25 to 200W Ku- Band SSPAs match TWTAs spec-for-spec in saturated efficiency and size/weight, but with much better linearity and consequently far superior size/weight and power consumption for equivalent linear power, while bringing SSPAs traditional advantages in reliability, power savings, noise and total cost-of-ownership.

About the author
Dr. Phillip J. Koh is Director of RF Engineering at Integral Systems’ SATCOM Solutions division. Prior to joining Integral Systems in 2010, Dr. Koh founded Virginia Millimeter Wave, Inc. in 1997 and Sophia Wireless in 1999. At Sophia Wireless, Dr. Koh served as principal investigator on many research contracts for the United States Air Force, Army and Navy, NASA and MDA for the development of innovative mixers, amplifiers and oscillators, antennas and antenna arrays, phase shifters, MEMS devices and in particular, ultra-high efficiency power amplifiers. Dr. Koh’s doctoral research focused on semiconductor device design for millimeter wave applications, which set records for output power from a solid state source at 160 and 320 GHz. 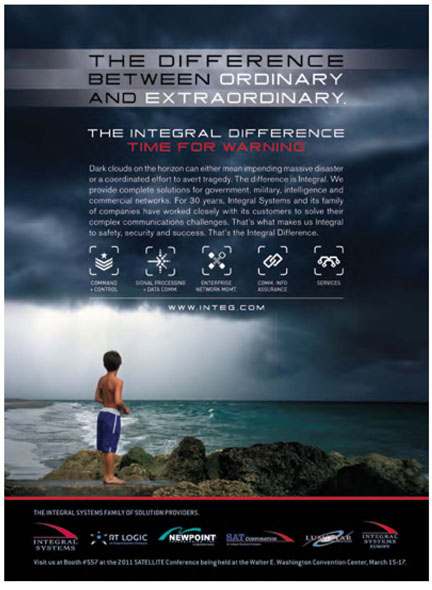 “Our customers have been demanding a smaller, lighter and more powerful amplifier that can solve their most challenging power issues and be used in a disparate set of environments,” said Steve Gizinski, General Manager of Integral Systems’ SATCOM Solutions division. “We are making available the most advanced, ultra-compact, lightweight and powerful SSPA that is ideal for any customer looking to cut capital and ongoing operating costs and increase efficiencies. In addition, our new line of SSPAs are ideally suited to replace old, 20th Century TWTA technology, with the market’s most advanced, state of the art SSPAs.”

The unit provides up to 140 Watts of saturated output power with a peak efficiency of 28 percent and 500 Watts of total power consumption with very little heat.

The integrated power supply accepts a wide range of input voltages from 18 to 55 VDC and is co-located with the power amplifier section to eliminate losses in high-current power paths and reduce drain bias line inductance. Thermal dissipation is typically under 400 Watts, which makes the cooling system smaller and simpler than other power dissipation systems. Plus, an integrated heat pipe baseplate evenly distributes heat load to eliminate hotspots. The core unit is fully O-ring sealed, and has been field tested for all-weather operations. A simple Graphical User Interface (GUI) interfaces with a host computer over a serial communications link to monitor and control voltage and output power. 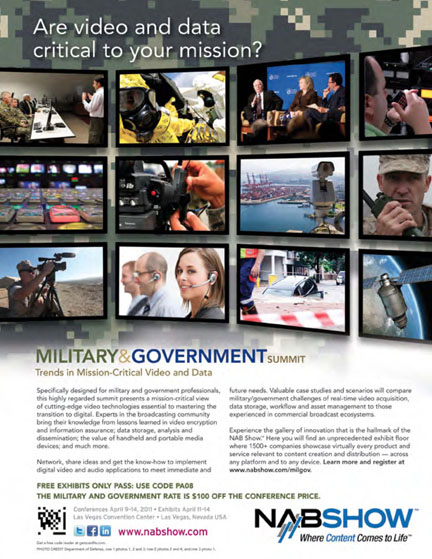 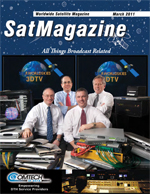