One of the most venerated organizations that supports our various industries and market segments is the Space Foundation, an international, nonprofit organization and the foremost advocate for all sectors of the space industry, from civil and commercial to national security. Founded in 1983 and based in Colorado Springs, Colorado, the Space Foundation is a leader in space awareness activities, major industry events, including the National Space Symposium, space-related educational enterprises, and space-related research. The Space Foundation has an office in Washington, D.C., and field representatives in Cape Canaveral, Florida, as well as and Houston, Texas.

Original event attendees numbered barely 250 space enthusiasts, while expected participants at the 27th National Space Symposium will surpass 8,000. The Symposium has become widely known as the premier U.S. space policy and program forum and the “must attend” opportunity for information and interaction on all sectors of space.

What drives NSS as a premiere event is the caliber of its participants, the extraordinary venue, and the structure of the agenda that creates the perfect environment for making contacts and getting business done. The number one reason attendees continue to return to NSS is the opportunity to network, meet with customers, and to make things happen — all in one place at one time. 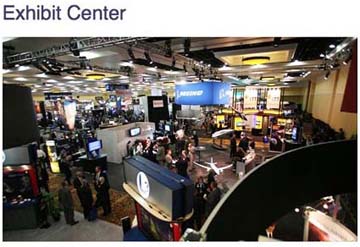 The National Space Symposium engaged in an important new dynamic in the late 1980s when it opened its doors to students and their teachers from across the nation. Education has been an increasingly important element of the event ever since, and the educational outreach increases every year.

The Symposium has also been the stage from which many notable space leaders have addressed the world. Prominent speakers have included the vice president; cabinet officials such as the secretaries of commerce, transportation and defense; secretaries of the Air Force; directors of the National Reconnaissance Office; commanders of United States Strategic Command, United States Northern Command and Air Force Space Command; NASA administrators; leading members of Congress; and senior industry executives as well as a host of state officials, astronauts, private space travelers, futurists, media personalities and leading educators. 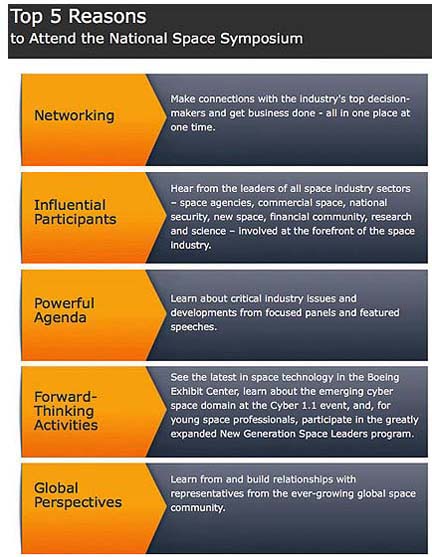 He chairs the Joint Requirements Oversight Council, co-chairs the Defense Acquisition Board, and serves as a member of the National Security Council Deputies Committee, the Nuclear Weapons Council and the Missile Defense Executive Board. He also co-chairs the Deputies Advisory Working Group, which provides advice to the deputy secretary of defense on resourcing and other high-level departmental business issues.

Cartwright was commissioned a second lieutenant in the Marine Corps in 1971. He completed Naval Flight Officer training in 1973 and graduated from Naval Aviator training in 1977. He has had operational assignments as an non-flight officer in the F-4, and as a pilot in the F-4, OA-4 and F/A-18. He is also a distinguished graduate of the Air Command and Staff College at Maxwell AFB, earned a Master of Arts degree in national security and strategic studies from the Naval War College, Newport, R. I., and completed a fellowship with Massachusetts Institute of Technology.

The Symposium is also known for its expansive exhibit center, which has grown from just one building and a few companies in its first years; to include an expanded temporary structure, in addition to the main building, from 1999-2006; and then today to two permanent buildings plus the lower level of Broadmoor Hall. This year’s exhibit center is nearly six times larger than it was in 1984 and filled with more than 150 companies and organizations representing the best of the space industry.

A future-oriented agenda, lively and productive networking discussions, global representation an expansive exhibit center showcasing the latest in space technology — these components create one of the National Space Symposium’s greatest strengths: an exhilarating, dynamic, and forward-thinking environment. Come and see for yourself why NSS is a “must attend” event, after all, it’s where your customers will be — don’t miss this opportunity to learn and connect!

A special benefit to attending NSS happens to be the location — The Broadmoor Hotel, a magnificent hotel that is the longest-running, consecutive winner of the AAA Five-Diamond and the Mobil Travel Guide Five-Star Awards — which also happened to celebrate its 90th anniversary in 2008.

The pet-friendly resort is located under the shadow of Cheyenne Mountain and offers an award-winning spa, fitness center, two swimming pools, three outdoor hot tubs, one lap pool; 54 holes of championship golf, six tennis courts; children’s programs; 24-hour room service, and 25 specialty retail shops. Many of The Broadmoor’s 593 guest rooms and 107 luxury suites offer breathtaking mountain views and balconies. It’s no surprise rooms at The Broadmoor sell out more than a year in advance for the National Space Symposium.

For more information, or to register for NSS, access this direct link. 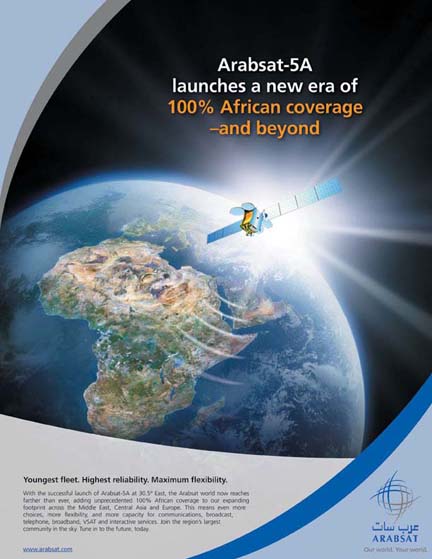