In the past, it was quite simple—satellites transmitted one analog program per downlink channel. However, all that changed in the early 1990s, with the advent of digital transmission systems and modulation methods which allowed data rates high enough to incorporate multiple programs per channel. Still, moderate-sized antennas worked well enough for the new digital signals that little change was required at existing Earth stations. 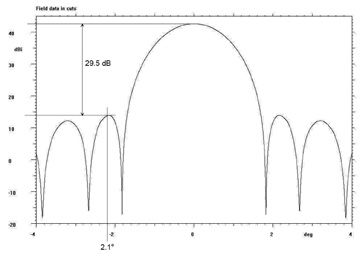 Then came high-definition television (HDTV), requiring higher data rates, and then more programs per channel, requiring even higher data rates. Higher-order modulation methods were developed to carry the higher data rates in the same channel bandwidth. And Earth stations began to struggle to maintain signal reliability for the downlink signals.

Now, still higher data rates are being proposed with modulation methods to match. The old antennas will no longer be able to keep up with the requirements for these new signals. Here’s why: Classic digital signals, used for low data rates, used a two-condition transmission method. A “bit” of data was represented by one condition, the absence of a “bit” by the other condition (typically called a “state” in the industry).

Because the differences between these two states were easy to distinguish, the transmission was quite robust and error-free. However, as data rate requirements increased, the number of transmitted “states” was increased, using discrete phase shifts to indicate groups of bits, then discrete amplitude changes, then combinations of these methods to indicate still larger groups of “bits.”

These advances allowed dramatically faster data rates for the digital transmissions. But, with these advances came problems. Because of the increased number of “states” in the transmission, the difference between the “states” became quite small, making them difficult to distinguish from noise at the receiving end of the system.

The signal-to-noise ratio became a more important factor in maintaining reliability of reception. For most TVRO operators, their existing antennas were adequate, if just barely. Now, new, higher-order modulations methods are being proposed, and it is quite certain they will come into operation in the not-too-distant future. These new systems will have even more data “states” than the existing systems, making them much more subject to data errors caused by system noise.

There are two basic ways to improve the signal-to-noise ratio in a TVRO system. One is to increase the power of the transmitted signal. But modern satellites already employ the latest transmitter technologies, and, for the older satellites, replacing them is typically a multi-hundred-million-dollar process.

The other way to improve the signal-to-noise ratio is to use an improved receiving antenna. We need to digress for a moment, and talk about “noise.”

“Noise” in a satellite receiving system comes essentially from two sources—the first amplifier in the LNB (Low Noise Block downconverter), and extraneous signals picked up by the antenna. Modern LNBs employ state-of-the-art electronics and little or no improvement can be anticipated there. 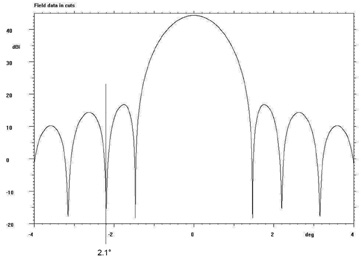 However, in most TVRO operations, the antenna can be improved to reduce these extraneous signals. Many TVRO operators installed 3.7 meter antennas years ago and are still using them today. For the current digital transmission systems, they are adequate, but just barely. For the new proposed systems, they simply will not do the job. The problem, as mentioned before, is the pickup of undesired signals by the antenna.

The two diagrams on the next page will show why the selection of the antenna will be critical for new and upgraded TVRO systems. The first plot shows a typical sidelobe response of a 3.7 meter antenna, a widely-used antenna in TVRO operations. Note that the first sidelobe peaks at 2.1 degrees offset from the main lobe, and is down about 29.5dB. This sidelobe response allows considerable energy from the adjacent satellite to enter the receiving system, and potentially interfere with reliable reception of digital signals.

A note here—although the satellites are spaced at two degrees, that spacing angle is based on the center of the Earth. Actual differential look angles from the surface of the Earth are slightly greater. Thus, the attention to the response of the antenna at 2.1 degree,. rather than at 2.0 degrees.

The next plot shows the same type of sidelobe pattern analysis for a 4.5 meter antenna. The 4.5 is also a popular size, but was often overlooked in the past, as it is more expensive than the 3.7 meter antenna and the 3.7 was adequate for the older transmission methods.

Notice that the 4.5 meter antenna has the second null in its sidelobe response pattern at exactly 2.1 degrees. This null allows this antenna to dramatically reject the signals from the two adjacent satellites.

About Superior Satellite Engineers
For more than 30 years, Superior Satellite Engineers has been a leading provider of respected satellite access products and services to TV industries, featuring the popular Navigator series steerable satellite antenna systems, fixed antenna systems, and our “Best in the Industry” Multiple-Satellite (MBF) Feed Systems. The MBF products configure a single existing or new satellite antenna to access programming from as many as three adjacent satellites. SSE has provided more than 20,000 retrofit MBF Systems worldwide for virtually every commercial-quality prime focus satellite antenna, ranging in size from 3.7 meters up to 11 meters in diameter .