For many years, Ka-band has been considered the future of satellite communications.

Ka-band provides incredible bandwidth, costs less to use than traditional Ku-band and is available today, with much greater availability in the near future. The capabilities of Ka-band satellite communications are already opening entirely new markets for enterprises and telecommunications companies worldwide.

Though Ka-band usage was initially slow on the uptake, that was largely because there has been a lack of wide availability in the Ka-band ground segment, even though numerous Ka-band satellites are in orbit. Uptake has also been hampered by Ku-band’s availability and reliability—many commercial users are happy with their present Ku-band services and see no need to invest in new equipment to move over to Ka-band.

Interestingly, these are the same arguments faced by Ku-band when it supplanted C-band many years ago. That the SATCOM industry was able to seize the Ku-band opportunity by developing and deploying new generations of high power satellites and new antenna, RF and modem technologies is a good indicator for the future success of Ka-band SATCOM services.

Though Ka-band operation requires higher-quality terminals with more precise positioning than Ku-band, the investment in upgraded terminals is balanced with Ka-band’s lower cost per bit for the service and a long-term, lower total cost of ownership. Commercial SATCOM users who try Ka-band are quickly hooked. 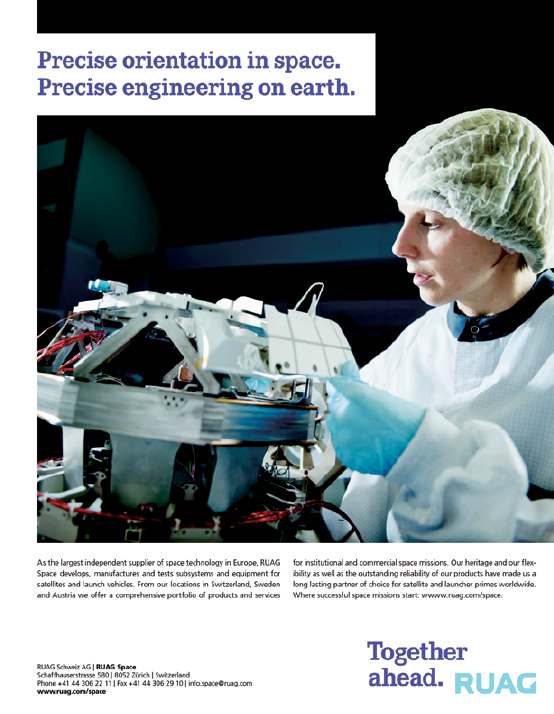 NASCAR teams are using Ka-band to monitor real-time car performance during races, and broadcasters are using it for broadcasting in true HD, both applications that require large amounts of bandwidth.

Military and government users have learned that with Ka-band, they can transmit orders-of-magnitude more data than they could with traditional Ku-band.

As Ka-band usage gains ground, a new transformative technology is entering the market—communications via O3b Networks’ Medium Earth Orbit (MEO) satellites. O3b’s present constellation of 12 satellites (with more on the way) is flying at an orbital height of 8,062 km. above Earth and covering an area between 45 degrees North and 45 degrees South of the equator (with limited coverage up to 62 degrees North and South).

Due to these satellites flying so much closer to Earth than Geostationary Orbit (GEO) satellites, the O3b system provides greatly reduced latency (round trip delay) that approaches the responsiveness of terrestrial fiber networks, all while providing the wide area coverage implicit in SATCOM technology. O3b rightly describes their connectivity as “Fiber Speed, Satellite Reach.”

O3b’s relatively low (MEO) orbit presents a challenge to the system’s ground stations: Each of the satellites is transmitting signals to, and receiving signals from, a particular Earth station only for short periods of time—from 20 minutes to an hour per satellite, depending on the Earth station’s latitude. 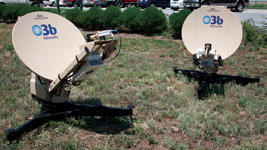 A tandem pair of 85 cm antennas. Photo is courtesy of AvL Technologies.

This creates a challenge for Earth station antennas tracking the MEO satellites in orbit. The solution to this problem is to provide the Earth station with antennas working in tandem pairs. One antenna tracks a satellite across the active portion of its orbit, while the other antenna remains ready for the handover and begins tracking the next satellite when that one becomes “visible.” Working together, the two antennas provide constant, consistent connectivity and no user data is lost.

On the ground and at sea, these antenna terminals will operate 24 hours per day, 365 days per year. A great deal of development and engineering was required to provide fixed, transportable and maritime terminals that could balance O3b’s always-on, ultra wideband digital traffic and gateway operations with a solution that is robust, affordable and can be used in any environment.

O3b partnered with AvL Technologies on the transportable antenna family. AvL transportable antennas are available with reflector sizes 0.85m, 1.0m, 1.2m, 1.8m, 2.0m and 2.4m, and are packed in ruggedized cases. The design is such that an O3b site can be established and become operational in two hours or less by relatively untrained personnel. 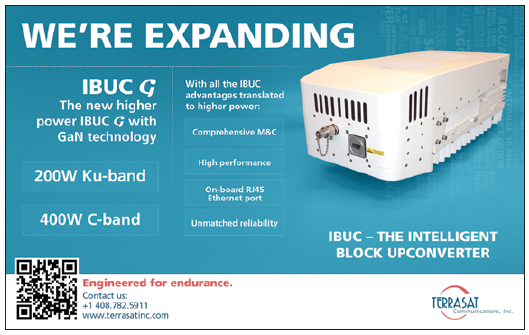 “The design of these antennas requires specific know-how and precision because the O3b satellites are moving across the orbital arc, the antennas must acquire and follow the satellites, and the antennas must be transportable,” said Mike Proffitt, president of AvL Technologies. “AvL transportable antennas were selected by O3b because of the high quality and durability of our products, and because of AvL’s engineering expertise in designing and manufacturing antennas.”

AvL’s MEO tracking antennas have come to the market quickly. The 0.85m antenna is now in the final approval stage and will soon be in production. The 2.4m antenna terminal will follow quickly and be available later in 2015. Both antennas assemble and disassemble quickly, and pack into rugged cases for easy transport to any location. Once assembled, any of AvL’s transportable MEO tracking antennas are quickly operational.

O3b’s MEO constellation provides incredible bandwidth—again, “fiber speed with satellite reach”—as a single O3b beam can supply an entire community with 1.6 Gbps of low latency service. The O3b network is unique in that its use of multiple satellites in MEO and Ka-band frequencies will allow for extremely wideband digital traffic with minimal latency, effectively doing away with the delay inherent in traditional satellite communications.

The opportunities for MEO satellite communications seem unlimited. With Ka-band service costing less per bit than traditional Ku-band service, and the opportunity to use a 1.6 Gbps spot beam, military and government agencies can now transfer far more data to and from UAVs, remote sites and post-disaster operations.

Oil and gas companies are recognizing the potential for continual monitoring of equipment performance and field operations, and broadcasters are recognizing the ability to broadcast in true HD and 4K/8K—as well as how economical the service is for true HD distribution. O3b’s service can also provide enough data transfer capability to extend it to an entire “floating city” such as an aircraft carrier or cruise ship.

Satellite communications have long been lauded for their ability to bring connectivity to challenging locations as well as their extreme reliability. However, with the progression into Ka-band services, especially when combined with the fiber-like latency over a MEO network such as O3b, satellites are now providing HD video, 4G LTE, cloud services and other bandwidth-intensive and latency-sensitive applications, to places where fiber cables aren’t practical. Simply put, they provide fiber speed, with satellite reach. 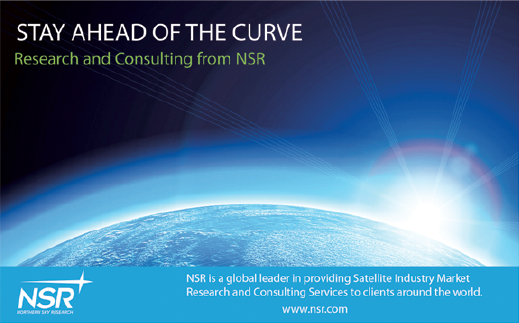