On August 16 of last year, Mark Simons, a professor of geophysics at Caltech, landed in Reykjavik with 15 students and two other faculty members to begin leading a tour of the volcanic, tectonic, and glaciological highlights of Iceland. 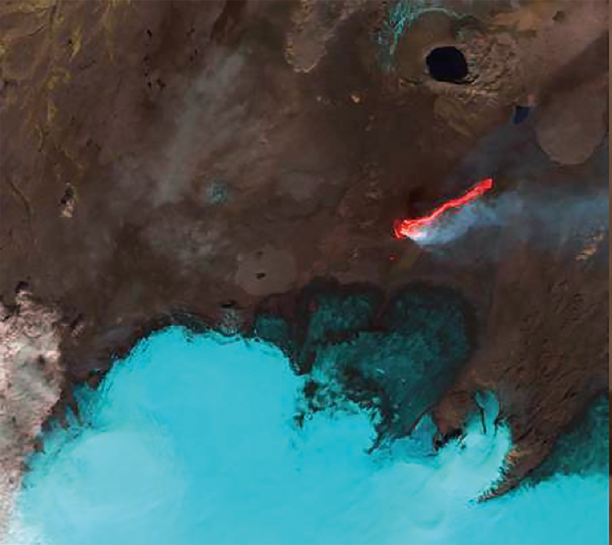 This Landsat 8 image, acquired on September 6, 2014, is a false-color view of the Holuhraun lava field north of Vatnajökull glacier in Iceland. The image combines shortwave infrared, near infrared, and green light to distinguish between cooler ice and steam and hot extruded lava. The Bárðarbunga caldera, visible in the lower left of the image under the ice cap, experienced a large-scale collapse starting in mid-August. Image credit: USGS

That same day, a swarm of earthquakes began shaking the island nation—seismicity that was related to one of Iceland’s many volcanoes, Bárðarbunga caldera, which lies beneath Vatnajökull ice cap.

As the trip proceeded, it became clear to scientists studying the event that magma beneath the caldera was feeding a dyke, a vertical sheet of magma slicing through the crust in a northeasterly direction. On August 29, as the Caltech group departed Iceland, the dike triggered an eruption in a lava field called Holuhraun, about 40 kilometers (roughly 25 miles) from the caldera just beyond the northern limit of the ice cap.

Although the timing of the volcanic activity necessitated some shuffling of the trip’s activities, such as canceling planned overnight visits near what was soon to become the eruption zone, it was also scientifically fortuitous. Simons is one of the leaders of a Caltech/JPL project known as the Advanced Rapid Imaging and Analysis (ARIA) program (additional information at the close of this article), which aims to use a growing constellation of international imaging radar satellites that will improve situational awareness, and thus response, following natural disasters.

Under the ARIA umbrella, Caltech and JPL/NASA had already formed a collaboration with the Italian Space Agency (ASI) to use its COSMO-SkyMed (CSK) constellation (consisting of four orbiting X-Band radar satellites) following such events.

Through the ASI/ARIA collaboration, the managers of CSK agreed to target the activity at Bárðarbunga for imaging using a technique called interferometric synthetic aperture radar (InSAR). As two CSK satellites flew over, separated by just one day, they bounced signals off the ground to create images of the surface of the glacier above the caldera.

By comparing those two images in what is called an interferogram, the scientists could see how the glacier surface had moved during that intervening day. By the evening of August 28, Simons was able to pull up that first interferogram on his cell phone. The interferogram revealed that the ice above the caldera was subsiding at a rate of 50 centimeters (more than a foot and a half) a day—a clear indication that the magma chamber below Bárðarbunga caldera was deflating.

The next morning, before his return flight to the United States, Simons took the data to researchers at the University of Iceland who were tracking Bárðarbunga’s activity.

“At that point, there had been no recognition that the caldera was collapsing. Naturally, they were focused on the dyke and all the earthquakes to the north,” said Simons. “Our goal was just to let them know about the activity at the caldera because we were really worried about the possibility of triggering a subglacial melt event that would generate a catastrophic flood.”

Luckily, that flood never happened, but the researchers at the University of Iceland did ramp up observations of the caldera with radar altimetry flights and installed a continuous GPS station on the ice overlying the center of the caldera.

Last December, Icelandic researchers published a paper in Nature about the Bárðarbunga event, largely focusing on the dyke and eruption. Now, completing the picture, Simons and his colleagues have developedna model to describe the collapsing caldera and the earthquakes produced by that action. The new findings appear in the journal Geophysical Journal International (gji.oxfordjournals.org/).

“Over a span of two months, there were more than 50 magnitude-5 earthquakes in this area. But they didn’t look like regular faulting—like shearing a crack,” said Simons. “Instead, the earthquakes looked like they resulted from movement inward along a vertical axis and horizontally outward in a radial direction—like an aluminum can when it’s being crushed.”

To try to determine what was actually generating the unusual earthquakes, Bryan Riel, a graduate student in Simons’s group and lead author on the paper, used the original one-day interferogram of the Bárðarbunga area along with four others collected by CSK in September and October. Most of those one-day pairs spanned at least one of the earthquakes, but in a couple of cases, they did not.

That allowed Riel to isolate the effect of the earthquakes and determine that most of the subsidence of the ice was due to what is called aseismic activity—the kind that does not produce big earthquakes. Thus, Riel was able to show that the earthquakes were not the primary cause of the surface deformation inferred from the satellite radar data.

“What we know for sure is that the magma chamber was deflating as the magma was feeding the dyke going northward,” said Riel. “We have come up with two different models to explain what was actually generating the earthquakes.”

In the first scenario, because the magma chamber deflated, pressure from the overlying rock and ice caused the caldera to collapse, producing the unusual earthquakes. This mechanism has been observed in cases of collapsing mines (e.g., the Crandall Canyon Mine in Utah).

The second model hypothesizes that there is a ring fault arcing around a significant portion of the caldera. As the magma chamber deflated, the large block of rock above it dropped but periodically got stuck on portions of the ring fault. As the block became unstuck, it caused rapid slip on the curved fault, producing the unusual earthquakes.

“Because we had access to these satellite images as well as GPS data, we have been able to produce two potential interpretations for the collapse of a caldera—a rare event that occurs maybe once every 50 to 100 years,” says Simons. “To be able to see this documented as it’s happening is truly phenomenal.”

Additional authors on the paper, The collapse of Bárðarbunga caldera, Iceland, are Hiroo Kanamori, John E. and Hazel S. Smits Professor of Geophysics, Emeritus, at Caltech; Pietro Milillo of the University of Basilicata in Potenza, Italy; Paul Lundgren of JPL; and Sergey Samsonov of the Canada Centre for Mapping and Earth Observation.

The work was supported by a NASA Earth and Space Science Fellowship and by the Caltech/JPL President’s and Director’s Fund.

About ARIA
ARIA is a collaboration between JPL and Caltech to exploit radar and optical remote sensing, GPS, and seismic observations for hazard science and response.