Dr. Jason Jolliff is an oceanographer with the U.S. Naval Research Laboratory (NRL). “The emphasis here,” he said, “is on developing models of the ocean environment to help the naval warfighter.” His most recent paper, published in the March of 2014 Ocean Modeling magazine, reveals that NRL can also forecast where oil will go following a major spill. 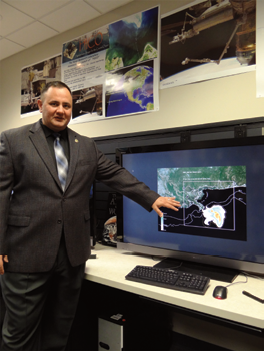 Dr. Jason Jolliff recently published a paper showing NRL’s capability to forecast a material in ocean currents applies to the 2010 Deepwater Horizon oil spill. “The tools we developed here at NRL are state of the art, without question,” he said. (Photo: U.S. Naval Research Laboratory/Shannon Mensi)

“If you’re going to do forecasting,” he said, “you have to get the ocean circulation correct. It’s fundamental to all else.” Jolliff plugged the distribution of surface oil following the 2010 Deepwater Horizon oil spill—when it was still well offshore—into a powerful NRL forecasting tool. He accurately predicted what would happen to the oil; in particular, the processes that made inevitable its landfall on Louisiana shorelines fully four days later.

Jolliff’s second key point is, “When we look at oceanographic problems, we have to understand the scales of time and space we’re dealing with.”

In 2010, there was concern about oil washing up on Florida beaches. But oil does evaporate and degrade; so knowing how far the oil will go over what period of time helps predict which beaches are at most risk.

Jolliff is part of a team developing a tool called Bio-Optical Forecasting (BioCast). “We’re developing this framework where you can combine satellite images, that give you an estimate of what is in the ocean, with ocean circulation models.” BioCast calculates “how those materials will ultimately be transported and dispersed.”

Jolliff is interested in how “tracers”—like plankton or nitrate distribution—change water clarity. “That will help the Navy predict ocean optical properties.” Divers need good visibility, as do airborne platforms that use electro-optics to “look” for mines in shallow waters. “But the general knowledge that we gain can be applied to a very wide range of forecasting problems, including contaminant distribution and oil spill response.”

Jolliff validated NRL’s capability for future operations by applying integrated forecasting to the Deepwater Horizon oil spill. He describes two sets of experiments: one at a local scale, focusing on currents near Louisiana; the second at a mesoscale, looking at the entire Gulf of Mexico.

Predicting Where Shoreline Oil Would Be Worst
Using satellite images from May 11, 2010—which show oil slicks still well away from shore—Jolliff forecast how oil would move over the next 96 hours. He predicted oil would make a substantial landfall on the Louisiana coast, west of the Mississippi River Delta, on May 14. “The forecast was qualitatively accurate,” he said. “That’s precisely what happened.” 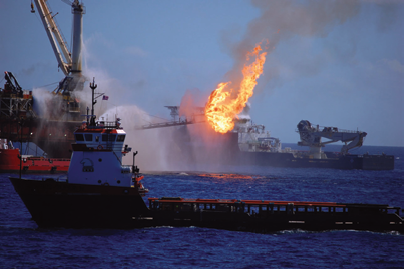 With forecasts of how water is moving from COAMPS, Jolliff predicts how a tracer will be transported through that system using BioCast. With a tracer like surface chlorophyll, which indicates phytoplankton abundance, he might forecast water clarity for a naval operations environment. By using oil from a well-documented spill as a tracer, Jolliff validated how the models work together.

“One of the things we can do at NRL is we can start to explore areas that weren’t necessarily thought of when [COAMPS] was designed,” said Jolliff.

Following Deepwater Horizon’s blowout, “the main surface aggregation of oil was offshore.” For the oil to reach shorelines, surface water from the deep ocean would have to carry it in and exchange with coastal waters. 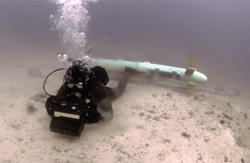 A diver tests underwater imaging system in the Arabian Sea, after an airborne platform “saw” this mine through the water. “The emphasis here,” said Dr. Jason Jolliff, an NRL oceanographer who forecasts ocean optics, “is on developing models of the ocean environment to help the naval warfighter.” (Photo: U.S. Navy)

With COAMPS, Jolliff was able to explain the water mass exchange that led to the severe oiling in Louisiana.

Additionally, there’s an unusually deep feature on the ocean floor to the southwest of the Delta, called the Mississippi Canyon. The irregular ocean depths, or bathymetry, between the Delta and the Canyon; prevailing winds; and fresh water that drains from the Delta all contribute to water mass exchange.

To show oil would be concentrated where currents converge, and dispersed where currents diverge, “We had specific buoyancy restoring term in the model that would bring oil back to the surface.” He was able to account for the tendency of oil, pulled under by currents, to rise back to the surface-critical to forecasting material transport. A three-dimensional framework made these zones of divergence and convergence easier to identify than in 2010 (Eulerian versus Lagrangian). (A future model that sought to include subsurface oil in the initial inputs would need a more complex accounting of how hydrocarbons interact with seawater and chemical dispersants.)

Jolliff doesn’t compare his predictions to what federal agencies made at the time, because they were continuously updating their simulations. “The take home message is that COAMPS was able to forecast the atmospheric and oceanographic conditions that made that funnel [of water mass exchange] operate. And so what was happening in the model then happened in reality.”

Mesoscale
Next, Jolliff sought to explain what happened to oil over a longer time period and wider region. Unlike the first set of experiments, “We’re doing what’s called a ‘hindcast’; and that’s every 12 hours, the ocean model is assimilating information from satellites to correct deviations from those observations.” 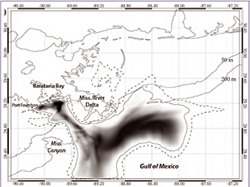 Dr. Jason Jolliff used surface oil estimates following the Deepwater Horizon blowout to forecast where oil would first hit shorelines 96 hours later, on May 14,2010. “If you’re going to do forecasting,” he said, “you have to get the ocean circulation correct. It’s fundamental to all else.” The protruding Mississippi River Delta mixed offshore oil into coastal currents. The underwater Mississippi Canyon helped funnel oil toward Barataria Bay. (Image: Jason Joliff; labels superimposed)

Except for two gaps, land hems in the Gulf of Mexico. As a result, ocean current tends to flow in through a gap between the Yucatan and Cuba, and then into a forceful clockwise Loop Current that turns toward the southeast.

Most of the time, the Gulf’s Loop Current is able to squeeze out through the Florida Straits. “But it’s unstable,” said Jolliff, “so with some frequency, this big loop detaches and forms this sort of closed, clockwise circulation of water—what oceanographers call a mesoscale eddy.” And with the hindcasts, Jolliff observed exactly that.

“You see that the Loop Current itself pinched off to form an eddy.” This fortuitous event prevented the current from carrying aggregated surface oil to Key West and eastern Florida beaches, like Miami. “This emphasizes the point that the only way you’d know that is to forecast the ocean circulation.”

In addition to understanding regional currents, time scale is also very important. For the 96-hour forecast, Jolliff could assume oil was an inert tracer. But over time, oil “weathers”—evaporating and biodegrading. Jolliff accounted for weathering in the mesoscale by assuming a rate of decay. He acknowledges this oversimplifies the true chemical properties of oil, and could be improved in a future model; but in 2010, most forecasters didn’t account for weathering at all.

Even if the current had carried oil to Florida, the damage likely wouldn’t have been severe. “What we see is that it takes more than 10 days for that surface oil to finally get entrained into the Loop Current. Enough time has elapsed that these materials are now significantly degraded.”

Dr. Jason Jolliff’s hindcasts, following the Deepwater Horizon blowout, show the Gulf’s Loop Current pinched itself off in a closed eddy. The natural weathering of oil, as he modeled with a decay constant, also explains why Florida beaches weren’t harmed. “When we look at oceanographic problems, we have to understand the scales of time and space we’re dealing with,” he said. (Image: Jason Joliff; labels superimposed)

Improving Ocean Models Supports Readiness
While Jolliff tested NRL’s operational capability against the Deepwater Horizon oil spill, he could make similar forecasts for a spill anywhere in the world. “What’s very powerful about COAMPS,” he said, “is we can take models that are much larger in scale, and we can zoom in to these local areas.”

Going forward, he’ll focus on integrating more cross-interacting variables directly into COAMPS to give naval operators a more accurate and complete forecast. “In any complicated system,” he said, “you’re going to have various feedbacks. The ocean and the atmosphere are constantly exchanging energy.” By bringing the tracer directly into COAMPS, instead of using BioCast to perform transport calculations separately from COAMPS, he could see if materials in the ocean impact air-sea interactions.

He, and NRL colleague, Dr. Travis Smith are researching the biological, chemical, and physical properties of key tracers. “As you go out to longer and longer time scales, you have to bring more and more of inherent reactivity of these materials into your calculations: things like phytoplankton growth, settling of particles.” Incorporating these properties, similar to what he did with the decay constant for oil, improves forecasts of ocean optics.

“The tools we’ve developed here at NRL are state of the art, without question,” he said.

About the author
Kyra Wiens is a Public Affairs Specialist for the U.S. Naval Research Laboratory (NRL). She’s written about the lab’s achievements in alternative energy, biochemistry, space science, and more; sharing with social media and reporters. She’s an All American triathlete and helped edit the Cambridge University Press book, Oil in the Environment: Lessons and Legacies of the Exxon Valdez Oil Spill (August 2013).

About the U.S. Naval Research Laboratory
The U.S. Naval Research Laboratory is the Navy’s full-spectrum corporate laboratory, conducting a broadly based multidisciplinary program of scientific research and advanced technological development. The Laboratory, with a total complement of nearly 2,800 personnel, is located in southwest Washington, D.C., with other major sites at the Stennis Space Center, Mississippi, and Monterey, California.

NRL has served the Navy and the nation for over 90 years and continues to meet the complex technological challenges of today’s world. For more information, visit the NRL homepage at http://www.nrl.navy.mil/ 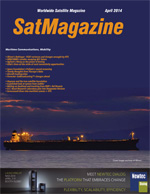