Nearly 55 years after the start of commercial satellite projects, the industry remains fascinating to inventors and investors. Many are spellbound by sophisticated projects to build and launch satellites into orbits around the earth. Blending almost magical advances in technology with miniaturized electronics has produced a dazzling array of concepts that would move the Internet into space. 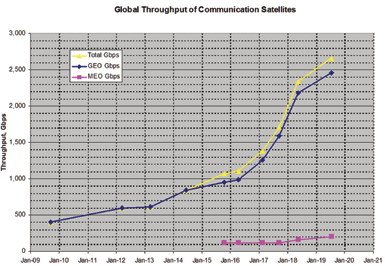 The demand for telecommunications transmission is booming and changing. The satellite industry must now deal with at least six issues that require resolution. These crises can be either a danger or an opportunity. There seems to be a state of confusion due to “disruptive” changes. TelAstra, Inc., decided to issue a major report using 35 years of industry data that the firm has collected. The report addresses each crisis in quantitative terms and explores alternatives that are being considered. It shows that there are relationships and experience that help clarify these matters.

Crisis #1
Terrestrial alternatives are reducing the size of markets that are addressable by satellite and increasing the importance of certain user groups. The terrestrial markets are much larger than those served by satellites. The wireless and fiber providers are more agile at introducing new technology and expanding throughput into more remote regions. They provide service for much lower cost when available in urban regions.

Crisis #2
Satellite operators also have been expanding throughput capacity faster than ever before (Figure 1). In most cases the growth in capacity has been faster than the growth in demand. Market forces set the stage for lower transmission prices. Satellites are more competitive, but total revenues have dropped for some. 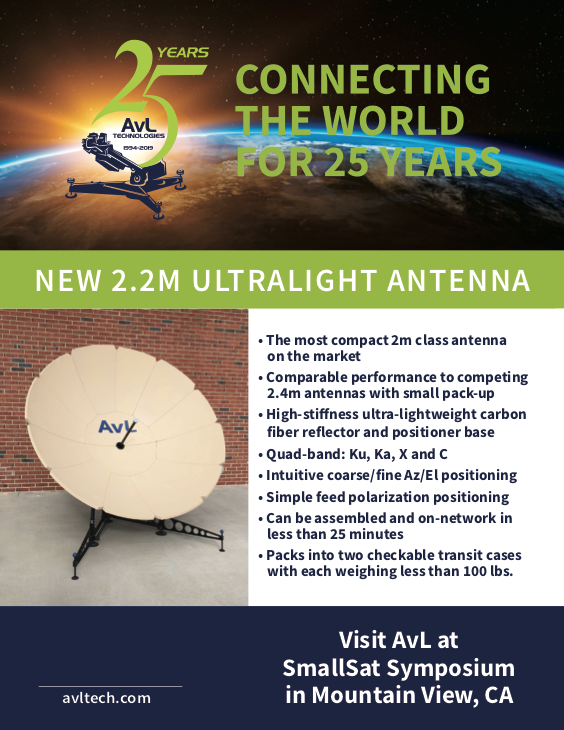 The report not only looks at past growth of communication capacity, but also estimates the total growth in satellite throughput from 2020 to 2026. The expansion of satellite capacity appears to be headed for even faster growth in the next few years.

TelAstra estimates that GEO, MEO, and LEO satellite systems under construction would each provide about 10 Tbps by 2026 for a total of 30 Tbps. This would be an increase in global satellite throughput by a factor of 7.5, which is equivalent to about 70% CAGR. This would be an unprecedented growth rate in supply for the satellite industry. It also exceeds the growth in demand for terrestrial services.

Crisis #3
Customer preferences have changed along with the associated types of service in demand. Cellular devices are infrequently used for voice telephone calls. Millions of people are abandoning broadcast television and prefer to extract programs directly from the Internet.

Crisis #4
The diverse views on these exciting developments and pricing shocks have caused some established players to pause and reduce capital expenditures. Fewer GEO satellites have been ordered. Fewer satellites are being procured for operation in Geostationary Earth Orbit (GEO). An astonishing array of Low Earth Orbit (LEO) constellations has been proposed with thousands of relatively smaller satellites. The merits and costs of these alternatives are being weighed. Established satellite operators are developing plans that attempt to select or straddle the best alternatives.

Crisis #6
New satellite solutions typically increase the complexity and cost of user terminals. In the case of LEO constellations, there is a desire for inexpensive electronic satellite-tracking user terminals. Tracking antennas are also needed for terminals on ships and aircraft even when connecting to GEO satellites. 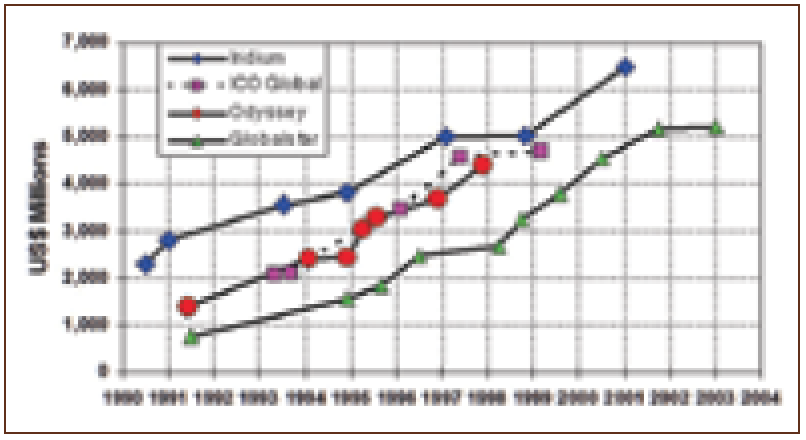 Each of the FSS operators has a distinct business and each is developing its own approach to these crises. There are a few common threads. The push to reduce transmission costs has led GEO operators to procure High Throughput Satellites (HTS), a huge increase in theoretical throughput. At the same time, demand for satellite services weakened due to the spread and expansion of terrestrial alternatives. Both production cost and market prices dropped. Capacity is still growing rapidly. The dynamics should not be a surprise since this occurred in the early 21st century. Generally speaking, we have seen that transmission lease prices drop when the cost of providing these services drops. A large expansion of capacity at moderate cost makes large price cuts possible.

The Mobile Satellite Service (MSS) operators have a different mixture of issues. MSS was started with the provisions of voice telephone services, a narrow-band service. Over time, users have expected broadband data services from MSS. Only Inmarsat has leaped into the broadband services business for passengers on cruise ships and Internet In-Flight Connections (IFC) for airline passengers. Iridium, Globalstar, Thuraya, and Orbcomm remain committed to low data-rate services. In a few cases they are forming alliances with broadband satellite providers. The number of Machine-to-Machine (M2M) or IOT users is growing rapidly, but the Average Revenue Per User (ARPU) is much lower than for voice or broadband services. The report addresses the situation for each MSS operator.

Television Broadcasting Satellites that provide Direct Broadcasting Service (DBS) or Direct To Home (DTH) must deal with the shift in customer preferences. Subscriber data suggest that fewer people are watching programmed video programs, at least in the developed parts of the world. The report discusses how this has impacted AT&T’s DirecTV and DISH. This trend will continue for some time, but there will continue to be an audience for television programs just as there is for radio. These characteristics will require different approaches in each part of the world. There are significant implications for the satellite broadcasting industry as it adapts to the evolving audiences and Higher Definition transmission.

Satellite Radio Broadcasting has been a big success in the US and continues to grow briskly. There are now more subscribers to satellite radio in the US than to the combination of DirecTV and DISH. The ARPU is lower than for television but the total revenue for satellite radio is double the revenue from all the MSS operators.

Echostar Hughes Network Systems, Viasat, and Eutelsat KA-Sat provide Broadband Satellite Services. The number of broadband subscriber has been falling for Viasat and Eutelsat, but Echostar HNS has been serving more subscribers. Viasat has been growing revenues by providing IFC to the airline industry. Revenues are growing in total and are about the same magnitude as for the MSS satellite operators.

At least three operators are funding new broadband satellite LEO constellations: OneWeb, SpaceX Starlink and the unnamed Telesat LEO constellation. Excitement about potential “disruptive” technologies led to ambitious plans for these LEO broadband constellations. Although similar ideas were advanced and failed 20 years ago, the lessons from that experience have been shelved as obsolete. “Super Rich” benefactors and Venture Capital have promoted and funded a large number of start-up companies that are based on relatively smaller-than-GEO satellites.

The report also examines other satellite services that are growing rapidly: Earth observation, Internet of Things (IOT), Radio Navigation Systems, and new launch systems. Each of these areas are discussed along with the names of significant new systems.

New GEO HTS have become enormously more capable with individual satellites providing throughput of 1,000 Gbps or more. Satellite operators must deal with variations in demand, both spatially and over time. Service demands are often concentrated in “hot spots,” and user demand can shift from one region to another. Consequently, satellite manufacturers have been developing more flexible payload designs that can move capacity and change frequency assignments by ground commands.

New LEO Constellations have been conceived to distribute broadband capacity over the entire surface of the earth while reducing transmission delays (latency). These new solutions require hundreds or thousands of relatively smaller-than-GEO satellites. Past studies have shown that LEO solutions have substantially higher capital and operating costs. New LEO satellite designs are expected to be much less expensive because of new technology.

TelAstra has observed that the cost estimates of LEO constellations tend to grow dramatically over time. Figure 2 shows the capital cost growth for four prior LEO constellations. The cost growth is partly due to underestimates of the space hardware, but, frequently, a number of important cost elements are not considered. The report identifies eight (8) cost elements that are frequently missing in initial business plans. The report also discusses the high operating cost of LEO systems.

There are a number of very clear and obvious mechanisms for government support to the space industry and its contractors that are discussed in the report. In addition to the topics above, the report provides data on several related matters.

Every LEO Constellation is inherently global in nature. These LEO Constellations can address users in every country. Consequently, if the LEO constellations wish to reach full utilization, it will be necessary to obtain licensing and approvals in many or most countries. This has been a daunting task.

Developed regions such as Europe, Japan, and North America will have very different needs from many parts of Asia and Africa that have a low per capita GDP.

Not all markets are open to free trade or mass communications. The totalitarian dictatorship in Communist China is extremely zealous about controlling communication. Other dictatorships will have similar issues. Any country that has an established space business will be interested in participation under the right circumstances. There are a growing number of nations that have space aspirations.

Where is the Industry Headed?
This topic has been the subject of a great deal of speculation. On the one hand, we have 55 years of industry experience and data. There have been ups and downs in the past. On the other hand, the world of technology and business is extremely dynamic. The purpose of this essay is to provide clear insights based on historical data, past experience and a carefully reasoned examination of the situation.

The report concludes with 10 bold predictions. If our experience tells us anything, it is that the excitement of space is not about to end. The adventure will continue for many years.
www.telastra.com

Roger Rusch is the president of TelAstra, Inc, a company that consults on the business and financial aspects of satellite communications. The company also publishes Communication Satellite Databases. Contact the author at RogerRusch@telastra.com.