Transportable VSAT antennas are used in many places—on the roof of a news truck, on the ground next to an emergency response trailer at the site of a natural disaster, in a parking lot at a large special event, mounted onto a camouflaged army transporter in a war zone, to name but a few locations. 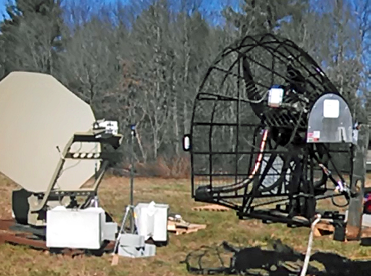 An AvL antenna getting set for a wind test using an air boat’s fan. Photo is courtesy of AvL Technologies.

In most cases, the person responsible for establishing satellite communications from the remote location is faced with multiple challenges.  First of all, h/she usually has other crucial roles to perform than only to set up the satellite link.  The task needs to be straightforward, simple and almost effortless—even in conditions where terrain, weather, satellite line-of-site obstructions and location “dynamics” can create challenges that can distract from the primary job at hand.

Regardless of the communication applications, antenna operators are transferring tremendous amounts of data and have extremely tight pointing requirements that are governed by the networks they’re using as well as by governing entities such as the ITU (International Telecommunication Union), which is the United Nations’ agency for information and communications technologies. 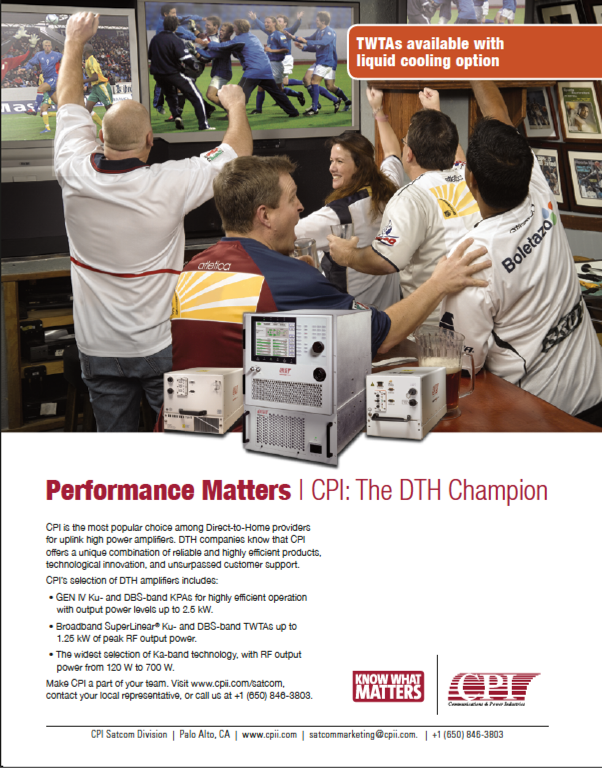 Well-made antennas enable proper satellite alignment, tight beams and pointing accuracy and minimize the likelihood for adjacent satellite interference or cross-polarization interference. However, operators who don’t follow procedure, or have poorly performing antennas, run the risk of interfering with other operators’ signals—with the possible results of being fined by the ITU or FCC, having signals jammed by the network or, worse, losing their operating license.

Antennas also require polarization positioning. For antennas with linear polarization, the feed is physically moved for proper alignment with the satellite’s receive signal. This movement can be motorized or manually directed in degrees—motorized feed movement is determined with an Orthogonal Mode Transducer (OMT). For antennas with circular polarization, the feed transmits polarized signals with the aid of an electronic phase shifter, which means physical positioning is not required.

AvL Technologies’ patented cable drive positioner is popular with SNG, disaster recovery, military and other customers due to the unit’s small size, light weight, precision pointing, zero backlash (no inherent play or give with mechanical parts) and high stiffness for maintaining an accurate point. AvL’s Cable Drive Positioner and the unit’s high-stiffness capabilities are especially important for Ku-band antennas with apertures of 1.0 meters or smaller, C-band antennas with 2.0 meter apertures and Ka-band antennas of all sizes.

Why Is Polarization Important?
Polarization is a property of electromagnetic waves that enable waves to oscillate in a given direction, and antennas use both hardware and software to direct waves as required. SATCOM antennas typically operate with linear or circular polarization, depending on the application and network requirements.

Regardless of the type of polarization used, an antenna that is transmitting to a satellite without being accurately pointed toward the satellite’s peak signal can create off-axis (off-peak) cross-polarization interference. This interference creates transmission issues for other operators communicating with the same satellite.

Linear polarization enables an antenna to double transmit capacity by simultaneously operating with two signals at the same frequency—with one signal being vertical and the other horizontal. But an antenna must use a good OMT to properly align polarities at 90 degrees—otherwise improper alignment will cause interference with other operators using the network.

Relationships
As frequencies go up, from C-band (4 to 8 GHz) to Ku-band (12 to 18 GHz) to Ka-band (26.5 to 40 GHz), for example, beams become narrower and pointing requires more precision. C-band’s lower frequency mandates a larger aperture (at least 2.0 meters for offset optics, per the FCC) to form a narrow beam and the beam is fairly simple to point and peak. Ka-band’s higher frequency enables a small aperture (such as 60 centimeters) to communicate but requires high-precision pointing that must remain on target despite environmental or other factors. 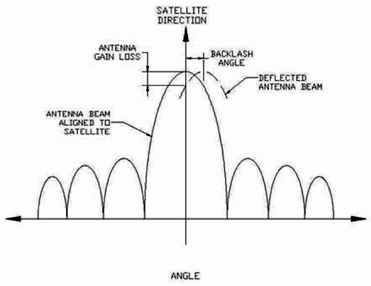 SNG trucks typically operate with C-band and/or Ku-band antennas and some newer news trucks have transitioned to Ka-band. The transition to Ka-band provides SNG operators with significantly more bandwidth and throughput, but also required is additional stabilization for maintaining continual peak position on a satellite.

Wind Compensation
An additional challenge with accurate antenna pointing is the windy environment on Earth. Strong wind can wreak havoc with satellite communications by physically moving the antenna to the point that signals are interrupted or lost—or begin to cause adjacent interference with nearby satellites. Many antenna control systems have adapted to this challenge by adding wind compensation capabilities.

AvL Technologies’ AAQ antenna control system relies on data from an inclinometer (measuring angles of tilt), pitch and roll sensors (antenna angles relative to gravity), a resolver (tracking degrees of rotation for the antenna positioner) and encoders (translating the antenna’s linear position to a digital signal for the AAQ). When the data from these sensors misaligns, the antenna is instructed to physically move to compensate for the force of the wind.

Antenna Design & Materials
Antenna design is another important consideration. An antenna positioner lacking stiffness can easily be pushed off-point by strong winds. A reflector made of aluminum is susceptible to changing shape due to extreme heat or cold temperatures, whereas a carbon fiber reflector will maintain shape through nearly any weather extreme. A poorly-designed or manufactured feed will not be able to manage two signals with dual polarization. A poorly-designed or manufactured OMT will not ensure linear polarities are separated by 90 degrees. 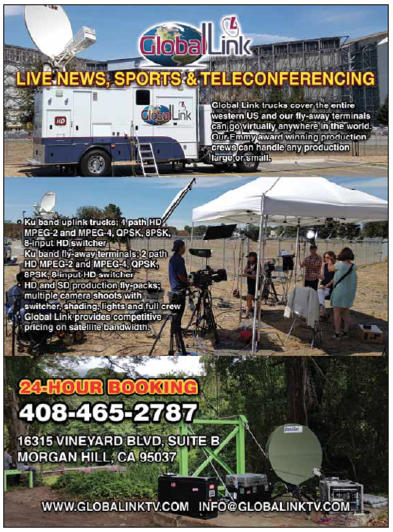 As with most technological products, the lowest performing component determines the highest level of performance for the overall system—the quality of materials used in an antenna is of the utmost importance to ensure high performance and minimize opportunities for causing interference.

Antenna Control Systems & Auto-Acquire Capability
Though parabolic reflector antennas can be manually pointed, most motorized antennas operate with an antenna control system. Antenna controllers are complex, dynamic systems that receive numerous data inputs from antenna sensors and subsystems, align this data with other information such as satellite location tables and direct the antenna toward the target satellite.

When target satellite parameters are pre-loaded into the controller, the antenna also can be directed to auto-acquire the satellite signal without operator assistance. AvL developed and introduced the first “one-button” auto-acquire controller in 2002 and began shipping all motorized AvL antennas with the trademark “green button—go, red button—stow” buttons on each positioner cover. The AAQ enables one-button auto-acquire and also employs dynamic sensors and algorithms to maintain the point regardless of orbit changes, the environment or other factors.

The Collaboration
Today, most transportable antenna operators use one-button auto-acquisition—those antennas, along with their controls systems, have operated problem-free while broadcasting events, restoring post-hurricane communications, or enabling service men and women to call home and to enjoy streaming video. For most, the foregone conclusion is that the auto-acquire antenna they’re using will properly peak and maintain signal and not cause interference with the satellite itself or other users on the network.

The importance of proper alignment between a satellite and an antenna cannot be overstated. Proper alignment is not an easy feat—it’s a collaboration of antenna design and materials, antenna size, positioner accuracy, and antenna control systems that makes the impossible… possible.
www.avltech.com/

Tony Wilkey is Senior Vice President at AvL Technologies with responsibility for US Sales, Marketing and Customer Service. He earned his Bachelor’s degree in Mechanical Engineering from Georgia Tech in 1981 and his Master’s degree in Mechanical Engineering degree from Stanford in 1983.  He has worked his entire career in the satellite industry, most recently with ViaSat, Inc., before joining AvL in 2008.