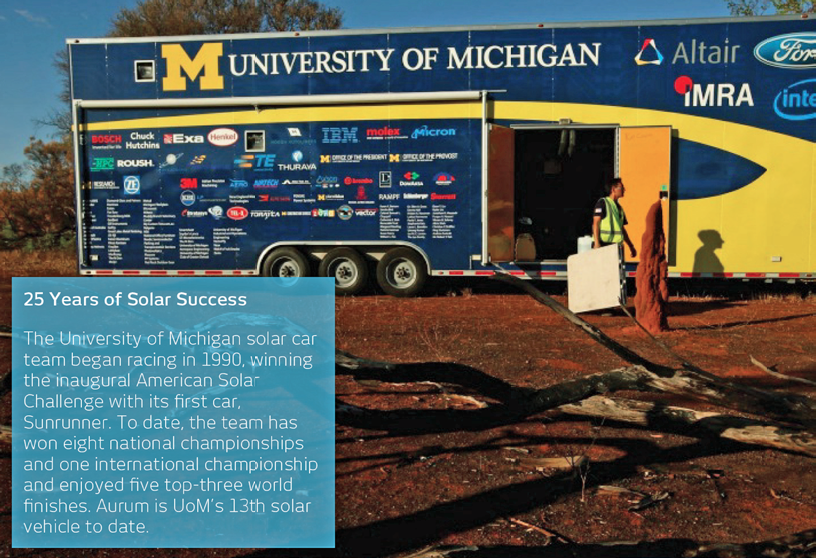 The sun can either be your enemy or your friend. In Australia’s outback—a vast desert the size of India—it is a constant threat. Travelers who set off in the intense heat without sufficient water, food and back-up communications are taking a huge risk.

However, for teams participating in the 2015 Bridgestone World Solar Challenge (WSC), the sun was a welcome companion. Competitors needed all the sunlight they could absorb as they crossed the outback between Darwin in the north and Adelaide in the south, covering 3,000 km of hostile terrain in vehicles powered by solar energy.

Team Manager, Pavan Naik, said, “Thuraya kindly supplied us with everything we needed for our fleet of seven support vehicles. You can’t rely on terrestrial networks or radio in the outback, so satellite services were crucial. We were very impressed by the quality of the voice channels and the reliability of the data links, even in extreme weather conditions. 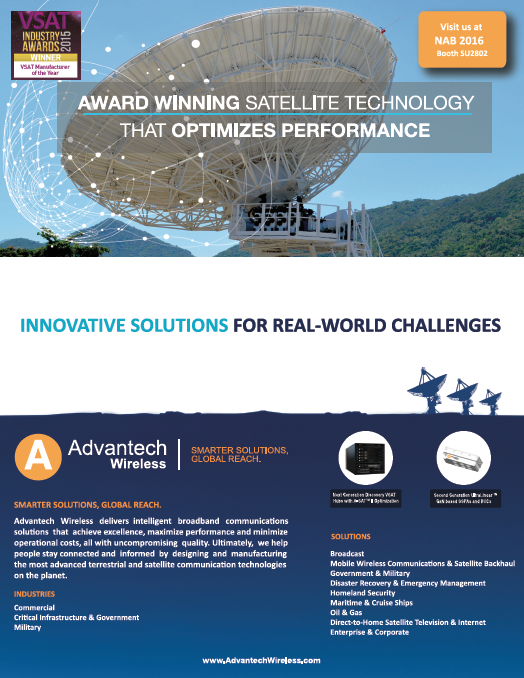 “Thuraya’s equipment proved invaluable to us even before the race began. During a pre-race test, the car was driven off-road and it crashed into some bushes. Luckily, the driver was unhurt and the car was undamaged, but testing that day was cut short. It was already late in the day and half the team were on their way back to camp. With no cell phone coverage, team members with Aurum were relieved to have their Thuraya satellite phones—they made a call and a truck was swiftly dispatched to trailer the car back to the camp.”

Leda Daehler, UoM Head Strategist, said, “It was already getting dark when our semi-trailer arrived, so if they had arrived much later we would have been waiting and moving the car in complete darkness. Thuraya really came through for us.”

Marginal Gains
UoM has amassed vast expertise in their 25 years of racing. Team members have learned the value of new ideas and technologies that enable marginal gains across a five-day race—providing extra seconds that make the difference between a podium finish and a place further down the field.

Aurum benefited from improved aerodynamics, reduced weight and a host of other enhancements compared with earlier vehicles. However, the race strategy was equally important—which is where Thuraya satellite communications gave the team an edge, helping them squeeze every last bit of speed and power from the vehicle by ensuring a constant flow of information between team members and external partners.

The core objective was to keep Aurum running as fast and as far as the rules permitted each day while exploiting every opportunity to recharge the batteries via the onboard solar panels. However, in a solar car, the fastest speed is not always the optimum speed. The team has to keep multiple factors in mind—the most important of which is the weather. 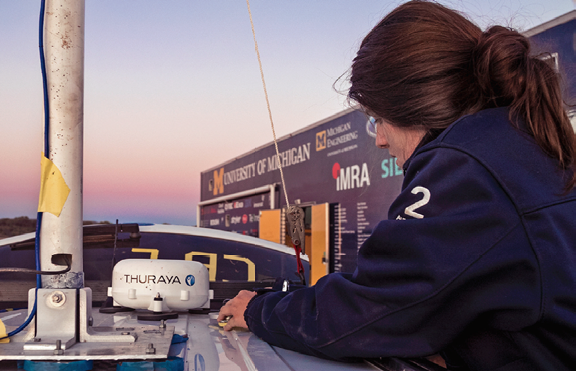 Following The Sun
Even an Australian spring does not guarantee wall-to-wall sunshine, which means accurate weather forecasting is key to the WSC race strategy. UoM team meteorologist, Jeff Cwagenberg, monitored the weather every second of the 2015 race from a vehicle traveling about 30 minutes ahead of Aurum. He explained how this is crucial to conserving battery power.

“We used the Thuraya IP Voyager data terminals to collect weather data continuously from weather stations and the IBM Watson weather modeling service to help us predict what the weather was going to do. We also used Thuraya phones to keep in constant touch with the strategy team traveling with the solar car. If I saw a cloud bank up ahead I let our head strategist Leda know immediately, so she could decide what action to take.”

In this way, Thuraya helped the team gain vital seconds over their rivals. “Cloud chasing”—adapting the speed of your vehicle to gain maximum sunlight—is an established element of race strategy for all teams. To do it well, one needs up-to-the minute information. In some circumstances, it can pay to allow the car to lose speed and allow the clouds move ahead, as the car will charge its batteries more quickly in the sunshine and can make up time later in the race.

Alternatively, it could be best to speed up. This will use more power but will move the car ahead into full sunshine. Occasionally, maintaining a constant speed under the cloud is best if you are confident the cloud will pass overhead quickly.

Cwagenberg said, “However, the bottom line is that any decision needs to be made quickly and based on good information. With Thuraya on board, the UoM team could communicate changes of strategy in an instant at any point during the race. We received the data needed to run real-time simulations enabling us to communicate easily with IBM Watson.”

Knowing When To Stop
Head Strategist Leda Daehler traveled in a support vehicle close to Aurum at all times, using a Thuraya satellite phone to stay in touch with the weather car and other support vehicles.

“The ideal situation for any team in the WSC is to cross the finish line with zero battery charge,” she said, “because that means you have used all your power where it matters—on the road. My job is to decide when and how we deploy our battery power.”

Solar cars use most power when accelerating up to cruising speed (about 100 km/h), so an important part of Leda’s job was to ensure Aurum only stopped when absolutely necessary. 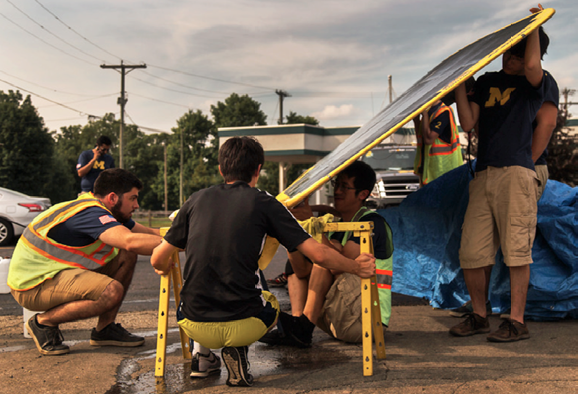 Other than mandatory control stops at designated checkpoints, the most challenging task was to select a place to pull over each day at the official end of racing at 5:00 p.m. This was a complex task that required fine judgment, great teamwork and constant communication via the Thuraya phones, as stopping in the wrong place could seriously undermine the overall race strategy.

At camp, line of sight to the horizon was essential to catch the sun’s rays for as long as possible and to obtain maximum battery charge. Pulling over close to trees or in thick bush severely restricted this process.

Also essential was to select an area where the car and support vehicles could easily pull off the road and to avoid stretches where the road was elevated up to a meter above the surrounding bush.

The hour or so leading up to 5:00 p.m. every day was a tense time for the team. Jeff in the weather car talked constantly to Leda on Thuraya phones, suggesting good places to camp for the night. Once the decision was made, the team used their satellite phones to guide the whole fleet for the last few kilometres in order for everyone to stop at the same place and at the correct time.

Work Continues
The end of the racing day was by no means the end of the working day for Thuraya. The team used the satellite phones for calls to race organizers, and to supporters in Michigan who were staying up late to hear the news of the day’s race events.

Later, the Thuraya data service came into play as Leda hosted question and answer sessions with UoM alumni via email. These were important because many of the people emailing were former UoM team members who could offer valuable strategy advice for the race the following day. UoM’s media team ensured everyone following the race was kept up-to-date, using Thuraya to post on websites, Facebook, Twitter and Flickr.

Night time was best for essential housekeeping tasks. During the 2013 race, the UoM team lost a hard drive containing a whole day’s race data— the team was determined this would reoccur. Thuraya’s IP data service was used to upload all vital data over night for safe back-up on the UoM home server and to also download updates for the team’s race software. 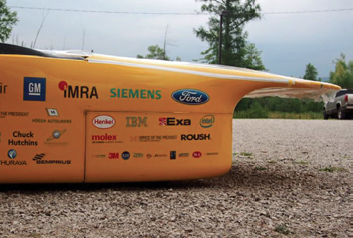 Climbing The Ranks
Aurum came a highly creditable fourth out of 29 in the 2015 WSC Challenger Class (up five places from 2013) and completed the route in 38 hours, 54 minutes and nine seconds. The vehicle finished only four minutes behind third-placed Tokai University, with an average speed just 0.13 km/h slower.

Over a 3,000km course, such fine margins are remarkable and demonstrate the effectiveness of the UoM race strategy. Pavan said, “We would have loved a podium finish but we were still very pleased with our performance. Throughout the race, Thuraya’s voice and data services gave us a genuine edge, so we are really grateful to Thuraya for its generous support.”
thuraya.com/ip-voyager

To learn more about the University of Michigan Solar Car Team, visit: solarcar.engin.umich.edu/