Fast forward about 65 million years. A creature much smaller and weaker dominates the Earth now, with brains instead of brawn. Its brain is a lot larger relative to its body size – plenty big enough to conceive a way to scan the cosmos for objects like the colossal asteroid that wrought the end of your kind. 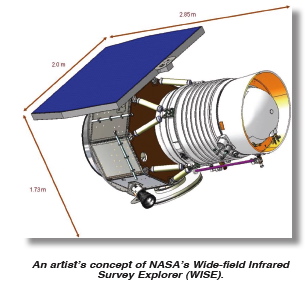 The creature, is designed and built WISE, NASA’s Wide-field Infrared Survey Explorer, to search for “dark” objects in space like brown dwarf stars, vast dust clouds, and Earth-approaching asteroids. WISE finds them by sensing their heat in the form of infrared light most other telescopes can’t pick up.

“Our instrument is finding [dozens] of asteroids every day that were never detected before,” says Ned Wright, principal investigator for WISE, and a physicist at the University of California in Los Angeles. “WISE is very good at this kind of work.”

Most of the asteroids WISE is finding are in the main asteroid belt between Mars and Jupiter, but a fraction of them are different — they’re the kind of Earth-approaching asteroids that send shivers all the way down a Brontosaurus’ spine.

“WISE has only been in orbit for about three months, but we’ve already found a handful of asteroids classified as ‘potentially hazardous,’ including one seen in 1996 but lost until re-observed by WISE. To be named ‘potentially hazardous,’ an asteroid’s orbit has to pass within about 5 million miles of Earth’s orbit. One of our discoveries’ orbit will cross Earth’s orbit less than 700,000 miles away.” 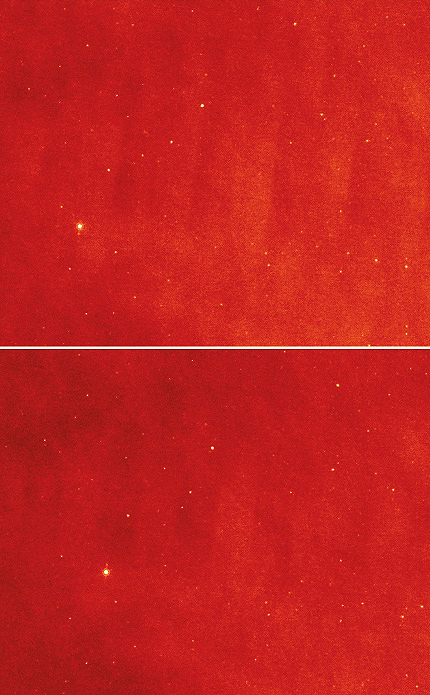 These two graphics present a duo of static blink comparisons revealing why infrared wavelengths are so good for asteroid hunting. It’s a patch of sky in the constellation Taurus photographed at two different times by the infrared Spitzer Space Telescope. The two frames are correctly aligned; the objects are moving because they are asteroids. At thermal infrared wavelengths, most of the bright objects in the plane of the solar system are space rocks.

WISE tracks each potentially hazardous near-Earth object (NEO) it finds every three hours for up to 30 hours and then produces a “short track” predicting where it will be for the next few weeks. The WISE team sends all of this information to the NASA-funded Minor Planet Center in Boston. They post it on a publicly available NEO confirmation page, where scientists and amateur astronomers alike can continue to track the asteroid. 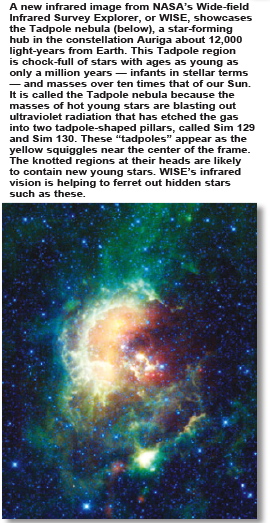 The asteroid that is thought to have wiped out the dinosaurs was big — about 6 miles or 10 km in diameter. The chances of a similar hit in modern times are almost non-existent, but that doesn’t mean we’re out of the woods. Smaller asteroids are fairly common, and they could do damage, too, in the rare event of impacting the Earth. As recently as 1908, for instance, an asteroid some tens of meters across exploded over Tunguska, Russia, wiping out eight hundred square miles of remote forest.

“Regional damage from a small asteroid strike can be very serious indeed,” says Wright. “We need to keep surveying the skies to find these NEOs and precisely measure their orbits. If we can find the really dangerous asteroids early enough, we might have time to figure out how to deal with them.”

Many telescopes on Earth are already searching. Notable programs include LINEAR, the Catalina Sky Survey and others. Working together over the years they have found more than a thousand potentially hazardous asteroids. WISE’s contribution to the total will be impressive. Between now and late October, when the mission is slated to end, Wright estimates the observatory will find a hundred thousand asteroids, mostly in the main belt, and hundreds of near Earth objects. Those are numbers even a Brontosaurus could appreciate. 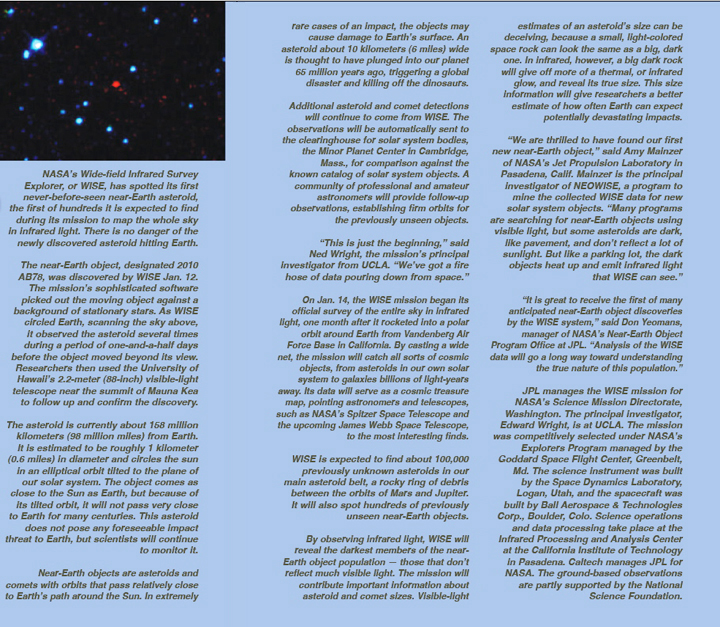