The European Association of Remote Sensing Companies (EARSC) is the European organization which—on a non-profit basis—promotes the use of Earth Observation (EO) technology and, especially, the companies in Europe which offer EO-related products and services. This is a membership based organization whose mission is to foster the development of the European EO geo-information service industries.

The EARSC has published their latest survey of the EO services industry in Europe and Canada. This is the second survey the organization has completed and follows their first survey two years ago. The survey provides a detailed perspective on how the industry is developing and what the key issues are which must be addressed.

This is a critical time with enormous changes occurring in the EO sector. In the last few months, two European satellite operators have acquired by North American companies. This caps a significant two year period when many new companies emerged with new and innovative business models.

This change moves remote sensing out of the government sector and into commercial ones. Nevertheless, government is still, and will remain, a key player and a major influence over the EO industry. 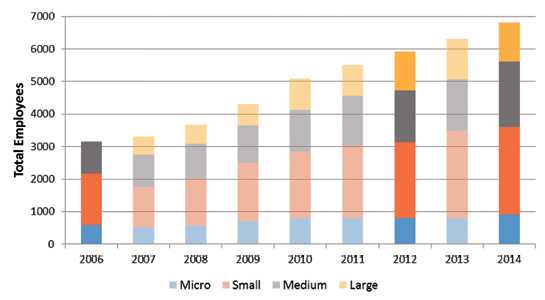 The EARSC survey reveals that the EO services industry continues to expand in Europe, with an estimated 450 companies generating revenues of over 900 million euros and employing some 6,800 highly skilled persons. This represents an average growth of around 8 percent per annum since the last survey, which is a little lower than the longer term growth rate over the last 10 years.

New companies are constantly being formed and policy should encourage this as much as possible. Most of the innovation emerges from the newer and smaller companies as well as where almost all the growth in revenues and employment is derived.

New companies have many options to generate capital through acquisition or by continuing to grow and sell equity. Policy should be and is geared to helping this process. Nevertheless, there seems to be a problem in Europe with access to risk capital—such is not so readily available as opposed to the US, where many more private, young entrepreneurs have made money on technology companies and are now looking around for other opportunities within which to invest. According to the economist, there are around 1,000 of these new-money private investors.

Chart 1 below reveals the growth in revenues over the last nine years from just over 400 million euros in 2006 to the 910 million euros last year. This includes EO service companies in Europe and Canada. 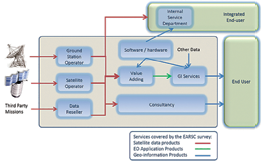 Our definition of an EO service company is any profit-making, legal entity which is selling products based on some element of data from Earth Observation satellites. This includes satellite operators, data distributors, value-adding, GI and consulting companies and ranges from a satellite operator who earns all of its revenue from selling imagery to a GI company which perhaps uses one part of an image combined with many other types of data to generate a GI product. The value-chain which we use in our survey is that shown in Chart 2.

Chart 3 shows similarly the growth in the number of employees working in the sector. From a total of around 3,100 in 2006, this has grown to 6,800 in 2014. The numbers have grown steadily and, whereas most of the revenue growth has come from the large companies (>250 employees), the majority of the employee growth has been witnessed in the small and medium sized ones.

Copernicus is seen as being a major stimulus for growth in the European EO sector. However, with the launch of Sentinel 1 in April of 2014, it is too early to see much impact. Nevertheless, the figures provide a reference for future years when some impact should be experienced.

Companies are optimistic and a majority expect to increase their business based on Copernicus products, mostly through the use of the satellite data coming from the Sentinels.

A summary of the survey results and a full and detailed report are both available on the EARSC infosite: www.earsc.org.

EARSC has 75 members from more than 22 European countries and is a recognised association both in Europe and worlwide and represents the European providers of geo-information services creating a network between industry, decision- makers and users. The organization considers that the market is at a crucial stage of development as Earth Observation becomes more frequently used by society and adds positive value to our daily lives. Nevertheless, there are many issues, opportunities and threats facing industrial actors. Supported by a small secretariat, EARSC informs and involves its members through its website and newsletters, through the provision of web-tools, as well as organizing events.

EARSC provides tools for its members to promote themselves and their services. As well as the afore listed EARSC infosite, the organization offers a portal (www.earsc-portal.eu) which promotes links between EARSC members and other communities such as the Oil & Gas industry, and a brokerage site (www.eopages.eu) for customers to find the services which they require and where companies can offer solutions.