SES used the giant IBC broadcasting technology show to unveil its ‘new look’ philosophy and logo and to flag up the fact that the Company was now carrying 6,000 TV and radio channels across its satellite fleet, with more than 2,400 being transmitted over Europe. SES is claiming the world’s top spot for HDTV channels, with 1,071 now on air around the globe. (216 over Europe). 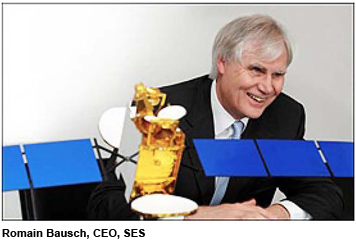 Romain Bausch and Ferd Kayser, SES’ CEO and COO respectively, told the press covering IBC that SES was now transmitting to a record number of homes, some 245m, spread across cable, DTH and IPTV, and via 43 DTH platforms. The ‘new look’ SES brings the former diverse and regionally-focused operations of SES into a more streamlined structure with “a strong focus on emerging markets”. Kayser said demand for video capacity remained strong, and by the end of 2011, he expected to be carrying some 230 high definition (HD) channels.

He explained SES would be launching 10 new satellites by the end of 2014, the first of which was a new craft (QuetzSat-1) to serve the Mexican and Latino region, which was scheduled for launch during Q4. 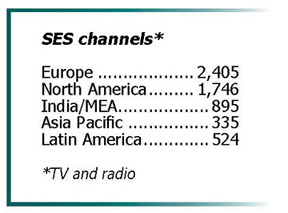 SES Astra (the ‘Astra’ name stays in use over Europe where it has a solid brand value) says it has further boosted its reach in Germany, with a record 17.1m homes now receiving satellite TV. In its latest study of German viewing — Astra’s largest market — indicates that while IPTV connections are rising, cable and DVB-T are losing viewers. The numbers were presented at the IFA technology show in Berlin on September 6th and again at IBC.

In the first half of 2011, direct-broadcast satellite was beamed into 430,000 additional households, taking the overall total up to 17.1m. By contrast, cable TV is losing in popularity. The first six months of the year saw 260,000 households switch to a different form of TV reception. This has reduced the reach of cable TV to 17.9m households. Digital terrestrial TV has also fallen in popularity. It has lost 300,000 households, bringing its coverage down to 1.7m. However, Internet TV has continued to grow this year. For the first time ever, IPTV in Germany has reached the one-million mark.

The above data comes from their latest Satellite Monitor results for the first half of 2011. The research was carried out by market research company TNS Infratest on behalf of SES Astra and in cooperation with the broadcasting institutions of the German states. Between May and June 2011, TNS conducted 8,000 interviews across the country. 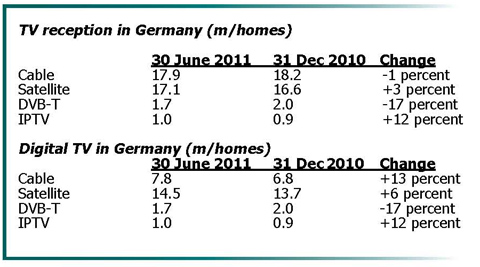 Astra says there are now 14.5m households using DVB-S — digital broadcasting via satellite — which brings the percentage of homes that have gone digital to 85 percent. Cable TV users are also going digital, but with the proportion at just 43 percent, the majority (10.1m households) are still receiving analogue services.

Analogue (satellite) switch-off in Germany is scheduled for April 30, 2012. Astra estimates that just 2.5m homes still look at the satellite operator’s dwindling analogue transmissions, which will end next April. Some 400,000 have converted to digital this year.

Wolfgang Elsäßer, Managing Director of Astra Deutschland, said, “Astra remains the most popular choice for TV reception. More and more people are realising that satellite TV is ahead of the competition when it comes to cost, variety and quality. Astra households throughout Germany can receive — with no monthly connection charges — around 270 German-language programmes, over 30 of which are broadcast in HDTV. We are confident that the remaining analogue households will switch to digital.”

Germany now has 4.5m satellite households watching content in HD quality. That is almost a third of all digital satellite users. An analysis by GfK Group, a market research group, revealed the proportion of satellite receivers that are HD has also increased. In the first six months of 2011, HD had a 61 percent share. In the same period last year, the figure was 55 percent. 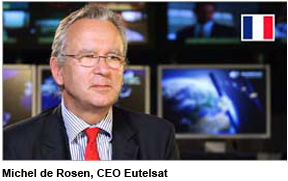 In absolute terms, the number of HD devices sold rose from 863,000 to 906,000. During the first half of 2011, a total of 1.531m digital satellite receivers were sold in Germany. That’s roughly the same number as in the first half of 2010 (1.596m). However, sales last year were boosted by major sporting events such as the Olympics and World Cup soccer, which have not been a factor in 2011.

Eutelsat’s Reasons To Be Cheerfulm
SES’ European arch-rival Eutelsat also has many reasons to be cheerful. A new report from investment bankers Morgan Stanley covers Eutelsat’s prospects, and it is almost entirely positive. “Management has one of the best track records of the industry. Trading at a ~10 percent discount to historic multiples, we view valuation as attractive,” says the bank, while at the same time praising the FSS sector in general.

Eutelsat’s (ETL) core business is poised to continue to deliver strong growth over the next three to five years. ETL’s video business, two thirds of group revenue, should continue to benefit from strong structural demand for satellite capacity. Two main drivers should stimulate revenue growth over the next five years: (i) The broadcasters, in ETL’s markets, are expected to keep launching new channels. The roll-out of DTT technology coupled with the increasing penetration of Pay-TV means that the number of TV channels should keep rising. (ii) Secondly, HD is being rolled-out at a rapid pace across most of ETL’s markets. In addition, 3D is starting to emerge, at least in the developed world. Recent research suggests that the number of households equipped with a 3D screen should rise substantially within the next five years.” 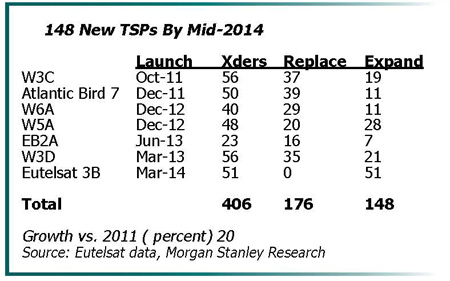 While demand for 3D capacity remains embryonic, it could push transponder demand further, maybe from 2014-2015, says the bank. They highlight two studies published in June 2011 confirming that view. Futuresource Consulting published an analysis forecasting that stereoscopic TV will be available to 40 percent of homes in Western Europe by 2015, equating to an installed base of nearly 65 million. On June 15th, DisplaySearch published a study forecasting that 3D-ready TV sets will represent 12 percent of the global TV screen market in 2011, rising to 20 percent in 2012. ‘Full’ 3D requires 50 percent more capacity than HD. 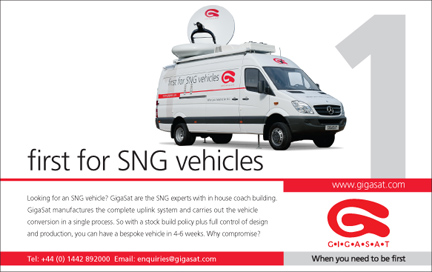 The bank’s report also examines Eutelsat’s new craft, Ka-Sat, saying: “Launched in December 2010, Ka-Sat should start producing meaningful revenue in fiscal 2012. We forecast Ka-Sat will produce 40m euros of revenue in 2012 rising to 80m euros in 2013 and 100m euros in 2014 (in line with guidance). While it is still in its early days, management expects KA-Sat’s revenue mix to be 40 percent Professional and 60 percent Consumer by 2014. During the 2011 FY results presentation, management highlighted that it would likely generate negative EBITDA in its first full year. ETL signed contracts with several retailers across 51 countries who are in charge of commercialising ETL’s broadband offer (B2B2C). Consumers must purchase a dish and a decoder / modem in order to use the service. Scaling up this business will take a few more quarters while ETL is paid by retailers on a monthly basis. We believe the impact on group EBITDA should remain limited. We forecast 2012 EBITDA margin of 78.3 percent, 100bp below that of 2011, but 100bp above guidance of “at least 77.3 percent”. Also, we believe monetizing Ka-Sat’s professional offer will prove easier since it does not require the type of upfront investment entailed by B2B2C. Ka-Sat’s B2B offer targets mobile video (e.g., TV reporters) and broadband services for remote businesses.

Morgan Stanley also reminds us that Eutelsat’s own guidance has always beaten — “We have looked at the differences between start-of-the-year guidance and actual reported results over the last five years. We discovered that in each of the last five years, reported revenue exceeded guidance by around 30m euros to around 70m euros, i.e., between 3.6 percent and 4.7 percent. On average, reported revenue came in 4.2 percent or 39m euros ahead of initial guidance. 2012 guidance is “group revenue to exceed 1235m euros”. If we were to rely solely on ETL’s track record, we could expect revenue to reach around 1270m to 1280m euros. We forecast 1255m euros vs. consensus of 1252m euros. The same remark also applies to margins. Over the last five years, management has beaten initial margin guidance by approximately 150 basis points. This, added to the revenue beat, means that on average, group EBITDA has exceeded start-of-the-year guidance by 45m euros. Our current 2012 forecast is 28m euros above guidance.”

About the author
Chris Forrester is a well-known broadcasting journalist and industry consultant and has been reporting on the “broadband explosion” for more than 25 years. Since 1988, Chris has been a freelance journalist who specializes in content, the business of television, and emerging applications, on all delivery platforms.

SES Links With Russia’s Gazprom
SES has struck up another of its special relationship agreements. This time it is Russia’s Gazprom and its Gazprom Space Systems division. SES now has a “strategic partnership” with the giant Russian company to provide new satellite capacity to serve the fast-growing Russian market.

“Under the terms of a multi-year agreement, SES has re-located its Astra 1F satellite previously located at 51 degrees East to the orbital location 55 degrees East. GSS will use 16 Ku-band FSS transponders on the Astra 1F satellite to provide communication services for Western Russia ahead of the arrival of GSS’ Yamal-402 satellite in 2012. In return, SES will use capacity on GSS’ Yamal-402 once it becomes operational at 55 degrees East. Yamal-402 is currently under construction and scheduled for launch in November 2012,” says SES.

The use of Astra 1F at 55 degrees East is part of a strategic partnership between SES and Gazprom to explore opportunities for the provision of satellite capacity for Russia. GSS will use the capacity on Astra 1F and, later, Yamal-402, together with Russian satellite service providers to deliver a wide spectrum of services. These services include; the transmission of TV bouquets for direct-to-home (DTH) satellite TV operators; the distribution of TV signals to cable and terrestrial networks and broadcasting stations; the delivery of broadband access for corporate clients and the consumer market; and point–to-point communication, as well as cellular backhauls and Satellite News Gathering (SNG) services.

Dimitry Sevastiyanov, General Director of GSS, said, “The move of Astra 1F is good news for the Russian market. The additional satellite arrives at a time of high demand and scarce capacity and brings us in a position to meet the actual and growing capacity needs of our customers. The cooperation with SES is very productive and we may see additional joint projects in the future.” 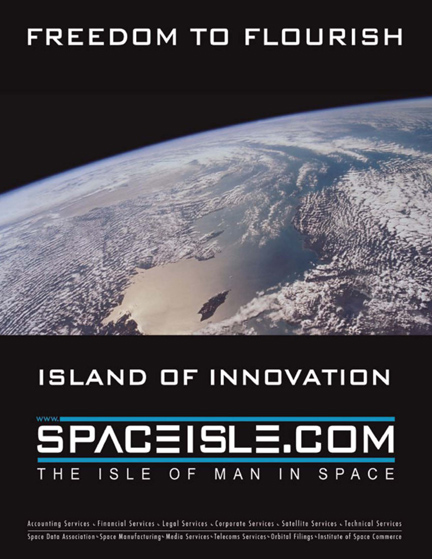