State-of-the art satellite communication systems at the highest data rates are operated on the Ka-band. As transmission quality on Ka-band frequencies is heavily dependent on weather conditions, suitable system configurations need to be carefully planned and selected. 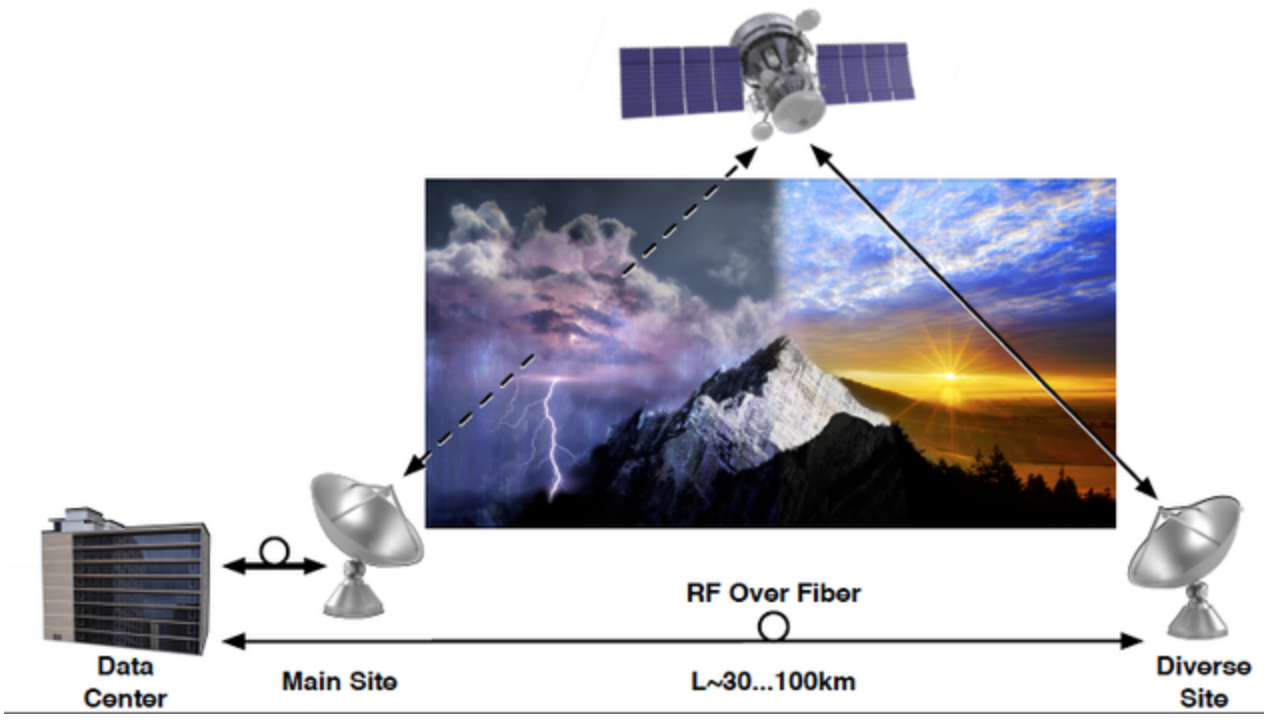 Today, satellite communication systems are deployed with point-to-point and multi-point topologies around the globe for broadcasting, data, and multimedia services and cellular backhaul.

Traditional satellite communication is based on C- and Ku-band transmission frequencies. Today, orbital positions are highly congested and additional bandwidth can essentially only be provided by using additional frequency bands.

For that reason, Ka-Band satellites are gaining a high level of interest to face the increasing demand for higher data transmission rates. In addition to the provisioning of additional frequencies, satellite communication systems operating in the Ka-band offer several other benefits.

Figure 2. This is a detailed schematic view of a Ka-Band site diversity configuration.

First, the available frequency range in the Ka-band is about four times larger than for satellite communication in conventional C-and Ku-band.

However, in addition to the undisputed advantages satellite communication system operated in the Ka-Band offer, they do face some challenges that need to be addressed appropriately through the installation of professional equipment and well thought out system configurations.

Figure 1 reveals the schematic view of a Ka-band site diversity configuration. The communication system is established by two antenna sites, a Main Antenna Site and a Diverse Antenna Site.

To equalize this issue, an optical Delay Line with in steps of 10 ns. adjustable time delay is used in the optical link to the Main Antenna Site. To bridge the quite long optical distance between Data Center and the Diverse Antenna Site, an optical Dense Wavelength Division Multiplexing (DWDM) transmission system is employed.

This DWDM system enables the transmission of up to 49 RF signals over one optical fiber, thereby facilitating the transfer of highest data rates.

To further increase the reliability and the availability of the system, equipment redundancy can be applied in addition. Figure 3 displays the schematic view of a bidirectional optical link between the Data Center and the Diverse Antenna Site in 1+1 redundancy configuration.

In the case of a malfunction or loss of a main transmitter or main receiver module, the redundancy switch at the receiver side switches over to the backup equipment ensuring a signal transmission with highest possible quality and uptime.
dev-systemtechnik.com