It was recently reported the United States is considering the establishment of a space tracking facility at Exmouth, which is located in the northwest of Western Australia. 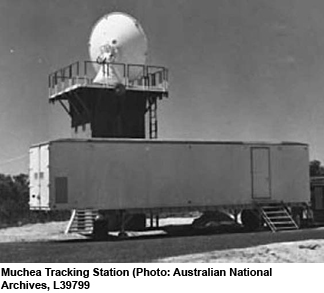 Western Australia, located at the eastern side of the Indian Ocean in the southern hemisphere, has a long history of providing tracking support to the world space agencies. This region also provides download facilities for communications satellites. This article offers a historical summary of these facilities.

During the Mercury program, the United States used a tracking facility near Muchea. Opened in 1961, Muchea was one of the 17 tracking stations positioned around the globe, of which two were in Australia. Apart from receiving telemetry data, Muchea also served as a command facility during the missions. The facilities were housed in trailers and included an S-band radar instrument. Data was sent to Washington by means of teletype equipment and radio. The Muchea site was closed after the completion of the Mercury programme in 1963.

To replace the Muchea facility, a new tracking station was established at Carnarvon. This facility, about 11km outside of the town in the Brown’s Ranges, was opened in 1963 and was initially operational for the Gemini program and later for the Apollo and Skylab programs.

In the NASA network, Carnarvon was important as it was the first tracking station that could contact the spacecraft after its orbit insertion. The principal antenna was a 9m diameter parabolic antenna while, for some time, a Cassegrain horn antenna was in use. NASA ceased operations in 1975 but Australia’s Overseas Telecommunication Commission continued to use the facility to support Intelsat and European Space Agency spaceflight operations—the facility was finally closed in 1984. In 1997, the facility was re-opened as a tourist attraction.

In 1979, the National Aeronautics and Space Administration (NASA), established the Yarragadee Mobile Laser (Moblas) tracking facility at the Yatharagga property near Dongara. Its initial purpose was to provide tracking of the Space Shuttle, but after the establishment of its space based tracking network, NASA transferred the Yarragadee facility to the Australian government for use in the Australian and International geodetic framework. The facility remains in use today.

Adjacent to the Yarragadee facility is a tracking facility operated by Universal Space Corporation, a subsidiary of the Swedish Space Corporation. Established in 1999, the facility has two independent antennas with capabilities for Telemetry Tracking & Command (TT&C) and data downlink services. It supports multiple frequency bands including S-, X-and Ku-Band. The site is also occasionally used as a backup to ESA’s New Norcia tracking station.

Established in 2002, the European Space Agency’s deep space tracking station in New Norcia is a crucial link in the solar system exploration missions undertaken by that agency. The station is equipped with a 35m parabolic reflector dish antenna.

The dish’s pedestal has a beam waveguide system, cooled S- and X-band Low Noise Amplifiers (LNA) and 20kW S- and X-band transmitters. Its equipment can be extended for use in the Ka-band. The New Norcia facility is unmanned most of the time, with control being provided remotely from the Perth International Telecommunications Centre (PITC) facility in Gnangara. During critical stages, however, a crew may be placed at the New Norcia site itself.

Owned by Telstra, the PITC facility at Gnangara is used for the receipt of international communications as well as in support of various scientific space missions, such as those by the European Space Agency and Japan’s JAXA space agency. The facility has, among others, a 15m diameter antenna with reception in S- and X-band and transmission in S-band as well as an antenna for the Global Positioning System—Tracking and Data Facility. The site’s original owner was the government owned Overseas Telecommunications Commission (OTC), and the site began operations in November 1986.

The Australian Defence Signals Directorate (DSD) operates a military receiving station at Kojarena, near Geraldton. It provides signals intelligence for Australian Government bodies, as well as the United States, the United Kingdom, Canada and New Zealand. It is believed the station is part of the worldwide Echelon system.

Optus operates a facility at Lockridge, in the Perth metropolitan area, to support international and some domestic satellite services. It is manned 24 hours a day in recognition of its key role as a Tracking, Telemetry & Control facility and has 21 antennas.

Finally, NewSat, a new communications satellite operator, has a ground facility in Bayswater, another suburb in the Perth metropolitan region.