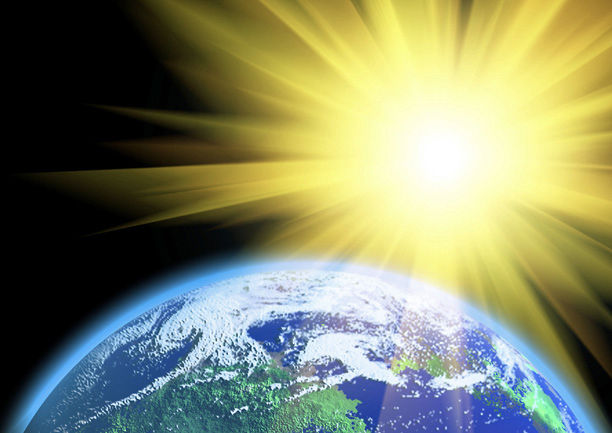 Our global and U.S. economy is dependent on stable and reasonable energy prices, especially oil, which directly affect commodities costs. James Hamilton has shown that 10 out 11 post-World War II recessions were associated with oil price spikes. He has also shown that oil price changes in the 2005-2008 period were sufficient to lead to the Great Recession (Brookings Paper). (Ref 1, 2)

A key measure of the economic value of energy is Energy Return On Investment (EROI), meaning how many BTU’s of energy are brought to market per BTU invested. Some fields in the Mid-East have had EROIs of 100. But different oil fields have markedly different EROI, which can and is dramatically impacting the market outlook for those countries and fields and the market’s response to consumer’s ability to meet market price points. As this “hurdle” is slowly being raised, countries and consumer markets are and will be excluded.

The fact that SSP has essentially zero fuel cost for power generation, is a prime advantage for SSP. Like nuclear and other massive electric power plants, SSP is not quick, cheap or easy to build. However, SSP, by tapping the sun directly, is expected to be lower in cost (EROI) than anything else on the energy horizon, as well many other advantages. As we see the cost of oil edge up, Figure 1 on the next page illustrates EROI for various power generation plants.

As Figure 1 shows, coal, gas (Combined Cycle Gas Turbine) and nuclear can be dispatched, or turned on, when desired. This means there is no need for energy storage or buffering, such as may be needed for roof-top solar or wind mills. This is why these units compose the bulk of the generation plants in the U.S. and globally.

Hydro is excellent power, when available, but it has many higher priority goals; drought and flood control, recreation, environmental and reservoir demands, to name a few. The developed countries have few unused hydro sites. Nuclear has a capacity factor of about 90 percent. Wind, for example, may be economic only if it does not need buffering or storage. This is a major issue with these energy alternatives—ground solar and wind—especially as the amount on the grid approaches the spinning reserve level, which can adversely affect reliability, as they are pseudo-random intermittent, and cost, since they have lower (poorer) EROI than competing energy sources.

Space Solar Power is estimated to have an EROI of about 300, using thin-film photovoltaics and assuming reusable commercial launch vehicles. Achieving that EROI—and SSP’s economic viability—depends on cutting launch to orbit prices down to about $150 per lb. to orbit. Accomplishing that requires much higher launch volume than currently exists. SSP alone has such a massive launch demand to require these. Elon Musk’s company SpaceX, is among those on track to develop RLVs. (Ref. 4):

“The payload penalty for full and fast reusability versus an expendable version is roughly 40 percent,” Musk says. “[But] propellant cost is less than 0.4 percent of the total flight cost. Even taking into account the payload reduction for reusability, the improvement is therefore theoretically over a hundred times.”

A hundred times is an incredible gain. It would drop the cost for Musk’s Falcon Heavy rocket—a scaled-up version of the Falcon 9 that’s currently rated at $1000 per pound to orbit—to just $10. “That, however, requires a very high flight rate, just like aircraft,” Musk says. (Ref. 5)

Another common question is, “Why should we tap the sun’s energy in space rather than with roof-top solar units or solar farms?” A photovoltaic panel at GEO provides about 9.6 times more energy per day than the same efficiency and size panel would on your roof in the continental U.S. (Ref. 6).

Even better than that, the SSP panel is in constant sunlight 24/7—actually a potential capacity factor of 99.3 percent—short outages would occur at local midnight during the fall and spring equinoxes, but even these are optimal times for outage, when even your refrigerator wouldn’t notice if SSP were your only power, which is unlikely.

By comparison, a typical roof-top panel has a pseudo-random intermittent capacity factor of about 29 percent. If you buffer, or use the lowest cost available energy storage—Compressed Air Energy Storage (CAES)—to improve the roof-top panel’s dispatchability, or availability on demand, SSP’s advantage increases to 71 times more energy per day—and that assumes only storing the energy for 24 hours, which is typically inadequate (Ref. 7), as cloudy days can often extend for a week or more.

Other advantages for SSP include very low water use:

Water Use
Approximately 85 percent of the current U.S. electric generation is produced by thermal generation facilities, such as coal, nuclear and natural gas, requiring massive amounts of freshwater supplies for cooling and steam production. Water supply has been the second highest-ranked environmental concern for the electric industry for the past seven years second only to carbon legislation. For the water industry, water supply is the top sustainability concern. (Ref. 8) Southern California has started building huge desalination plants:

“Water in California historically has been cheap and plentiful,” he said. “Neither of those facts is true anymore.” said Peter McLaggan, who heads development of Poseidon’s Carlsbad, California, plant. When it comes online in 2016, the plant will join 8,200 reverse osmosis desalination plants worldwide, producing 9.8 billion gallons of water a day, McLaggan said. A twin plant will be built at Huntington Beach, California, in 2018. Desalinated water is expected to cost about $2,000 per acre-foot, about twice what the authority pays for imported water from the Los Angeles-based Metropolitan Water District. (Rev. 9) 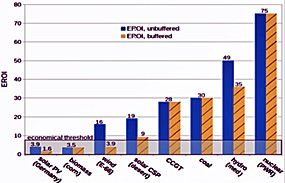 For the first time in history, the Bureau of Reclamation will reduce Colorado River water deliveries from Lake Powell downstream to Lake Mead, the largest water reservoir in the U.S. “This is the worst 14-year drought period in the last hundred years,” said Upper Colorado Regional Director Larry Walkoviak. Matt Niemerski, director of Western water policy for nonprofit American Rivers, said, “Nobody really thought we’d have to deal with this as quickly as we are. It’s the first definitive domino to fall that could lead to a host of other troubles if we don’t begin to act. That, in turn, could affect food prices.” (Rev. 10)

And CO2 Intensity
As our atmospheric CO2 level continues to increase, plant photorespiration decreases and nitrate assimilation in most plant species is severely inhibited. Declines in forest health and food quality that are associated with climate change derive in part from CO2 inhibition of nitrate assimilation that diminishes plant organic N levels. (Nitrogen, and therefore, protein concentration.) This exacerbates damage from insects and other pests as they consume more plant material to meet their nutritional needs. (Ref. 11)

Nutrition from wheat and rice decline. Wheat grown at doubled CO2 declines in protein content by 9-13 percent. It produces poorer dough of lower extensibility and decreased loaf volume. The quality of flour for bread making degrades. The protein content of rice declines under doubled CO2 corresponding temperature increase. Iron and zinc concentrations in rice, important for human nutrition, would be lower. (Ref. 12)

Summary
The electric power system generation and grid is the most equity intensive business on the planet. It requires more dollars of concrete and steel in the ground to make a dollar of revenue than any other business. That is why power generation has been a regulated monopoly for most of the industry’s existence. Lenders are not eager to loan to build a massive project which has a poor likelihood of generating revenue.

Many energy alternatives have been explored and subsidized, yet our dependency has grown; while prices escalate, our per capita incomes, our energy, economic and environmental security continues to decline. To sustain a reasonable standard of living, while protecting our environment, we must rebuild our energy supply. 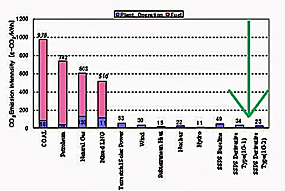 Existing U.S. energy polices continue to ignore SSP. SSP is commercially feasible using key legislation we call the Sunsat Act. The fact that we are technically able to build a Space Solar Power System must be tempered by the fact that there are no existing U.S. corporations, including electric power companies, with the patient financial resources, technology and charter to initiate SSP today.

Just as the Comsat Act of 1962 created our robust commercial satellite communications industry, a Sunsat Act would create a commercial power satellite industry. Japan has already embarked on this SSP development path and are expected to bring it to the global electric power market 10 to 20 years from now, China is expected to soon embark on this path also.

Space Solar Power holds out the promise of directly tapping the sun’s bountiful energy supply and plugging it directly into our global electric power grids. A careful examination of the pros and cons of primary energy sources now available, shows Space Solar Power(SSP), to be a clean, dispatchable, and virtually unlimited energy source with many crucial advantages. 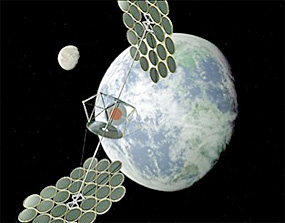 An Integrated Symmetric Concentrator, a NASA design, circa 2001

About the author
Darel Preble is Executive Director, Space Solar Power Institute, Atlanta, Georgia. Among his previous positions are advanced systems development and strategic planning for a major electric power company. The Space Solar Power Institute is a non-profit educational corporation chartered in 1997, working to bridge the educational gap between the aerospace industry and critical energy issues impinging upon our economy and environment. 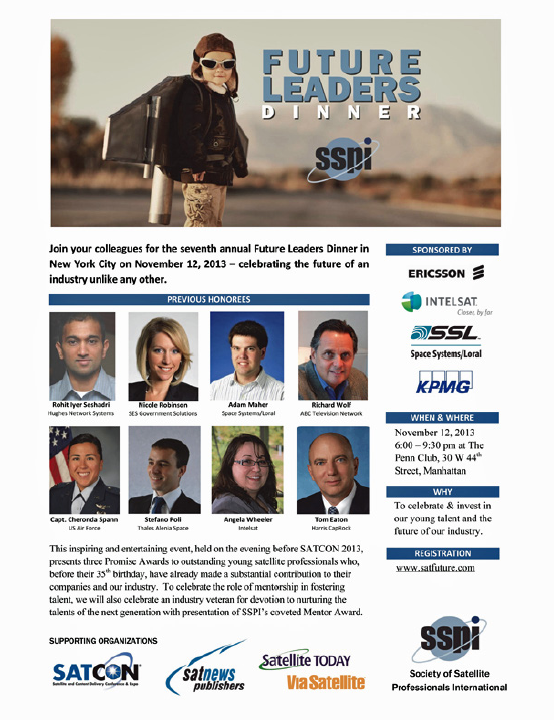