Amplitude and phase-shift keying This article presents estimations of the StarLink constellation bandwidth, obtained on the basis of open data that includes public statements by SpaceX specialists, documents submitted to the FCC and data from StarLink`s users. 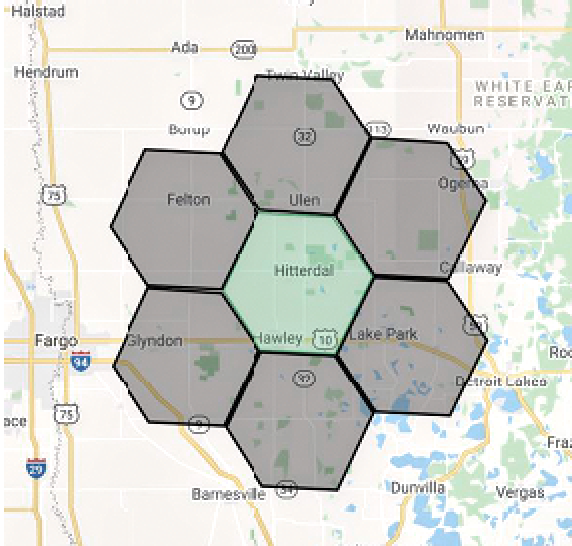 The diameter of the cell on the surface of the Earth to which the beam from the satellite covers is 15 miles (24.13 km.). The StarLink network uses a hexagon inscribed in a 15-mile circle to plan its solid coverage, with an area of 379 square kilometers.

In rural areas of In the United States, 57.23 million people live in rural areas and the average household size is 2.53 people. Thus, on average, 5,339 people live in one cell in rural areas within which are 2,110 houses. The available bandwidth of StarLink satellites to user terminals is 2000 MHz in the Ku-band and 500 MHz from the terminal to the satellite. The documents filed with the FCC1 talked about the possibilities of working with modulations from BPSK to 64QAM.

FCC (1) talked about the possibilities of working with modulations from BPSK to 64QAM.

There are two polarizations available on the satellite.

Number of cells for different situations

For 100 percent coverage of the rural area of the United States, 1,341 satellites are required and, as of this writing, there are now there more than 1,400 satellites on-orbit. However, everything is not so simple as all satellites are relatively evenly distributed over the entire surface of the globe — the territory of the continental United States occupies only 2.55 percent of Earth’s territory between the 53 parallels.

Let us estimate how many satellites are available for service over the United States at any given moment. To do this, we will use the www.starlink.sx service (many thanks to the site’s creators). Note that the density of satellites over the United States is uneven, depending upon the latitude of the subscriber. Estimation of the number of satellites available, depending upon the latitude covered by the satellite beam, is 15 miles (24.13 km.). 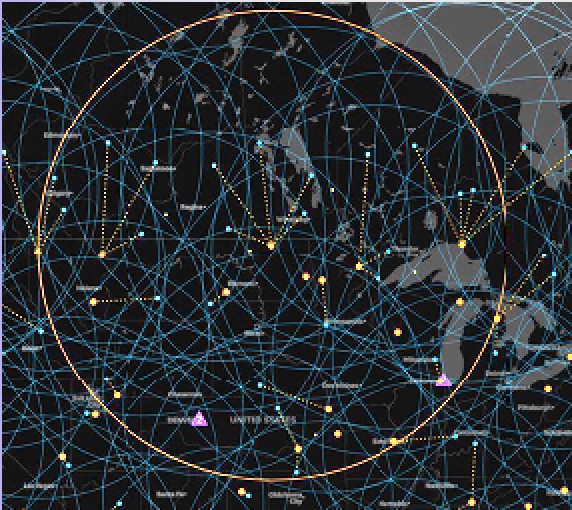 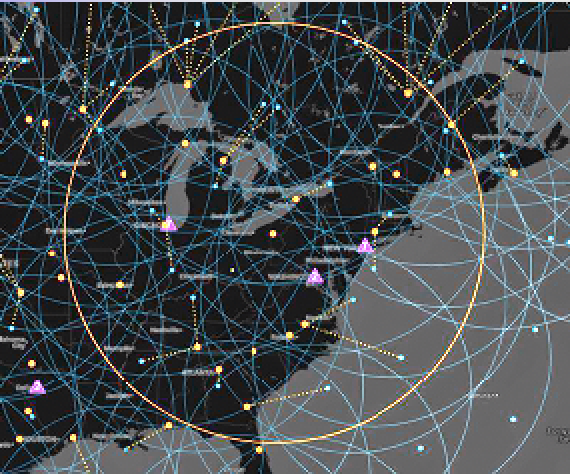 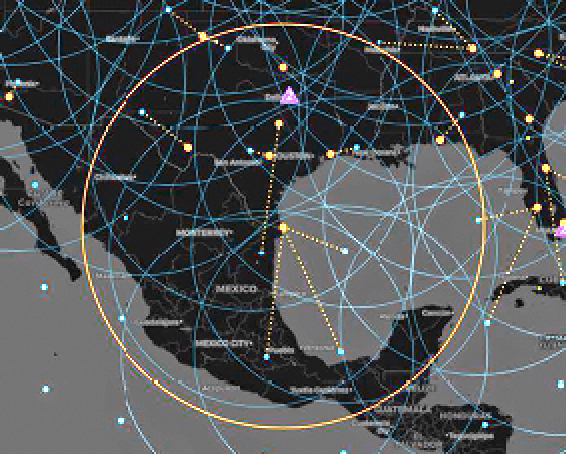 Blue dots are active satellites, yellow dots are Gateways. Images were captured on September 3, 2021, for the position of the constellation, with 1,282 satellites having reached their final orbit on that day. As the StarLink constellation is constantly growing, the number of satellites may be larger as of this writing.

Let us estimate the “density” of the satellite coverage for different latitudes, It is obvious that the chance of obtaining StarLink service for those living in the North of the U.S. is 70 percent higher than for those who live in the southern portion of the country.

In total, it turns out that in the best case, even in the northern regions of the United States, only 1 cell out of 29 (less than 4 percent) is available in rural areas that would be addressed by the service with the full deployment of the first phase of the StarLink constellation. 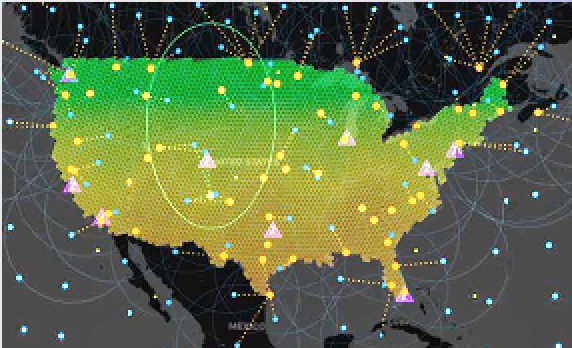 The data in the image above corresponds to the full coverage
of the United States.

The mission of SpaceX includes full coverage of the Earth, without which it will be impossible to organize roaming for ships and aircraft, so there must be a solution.

First, it is possible to exclude a number of unpopulated areas or areas where there are no shipping routes or airways from service. The re- targeting time of a phased array antenna is only 5-10 microseconds (4,000 times less than the latency in the Starlink network). This allows beam hopping a single beam to serve sequentially several cells in turn.

Then, depending on how many cells are included in one service cycle, it is possible to increase the number of cells where the service is provided by 2 to 5 to 10 times or more.

At this point, the analysis of the possibility of providing global coverage for the StarLink service may be considered complete. Now let’s consider the necessary composition of the constellation from the point of view of traffic from subscribers.

The bandwidth of the StarLink satellite will be 20 Gbps when operating in two polarizations and with 64QAM (Quadrature Amplitude Modulation). Now, the network can use only one polarization to work with UT-1 terminals. 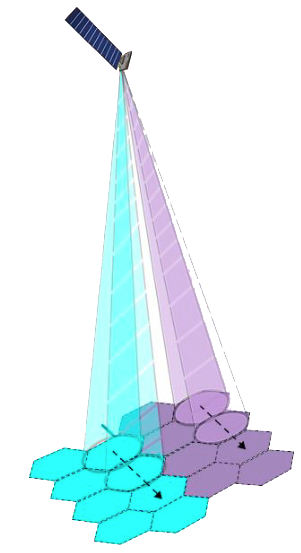 In addition, to work with 64QAM modulation, it is necessary to have a EbNo (a normalized signal-to-noise ratio measure) of more than 17 dB. However, currently the SNR (Signal Noise Ratio) parameter on the UT-1 terminal is 11 to 12.5 dB, which corresponds to 16 to 32 APSK (Amplitude and Phase-Shift Keying) and a maximum of 3,5 bit/Hz.

This is indirectly confirmed by tests of StarLink service: the record speed for the terminal was demonstrated in the spring of 2021 at the start of the provision of services in Germany, where the number of subscribers per a single cell was minimal and one subscriber could use the entire bandwidth of the beam: territory), then with 1,584 satellites (100 percent of phase 1).

We can proceed from the assumption that all users in the same cell should share approximately 840 Mbit if the beam serves only 1 cell and 240 Mbit if the beam uses beam hopping and serves 3 cells. Let’s analyze how much traffic can be downloaded by one StarLink subscriber.

Let’s assume that the needs of StarLink users will be similar. For five hours (between 6:00 and 11:00 p.m.), users download an average of 5.87 GB. Let’s assume that 85 percent of this traffic is from the internet — then we need 2.27 Mbit per second to download such a volume of traffic.

It should also be taken into account that there are peak moments of consumption, such as premieres on Netflix or the Super Bowl. The practice of Operators do not allow an average network load of more than 70 to 80 percent, in order to avoid degradation of the service during such periods of peak time. 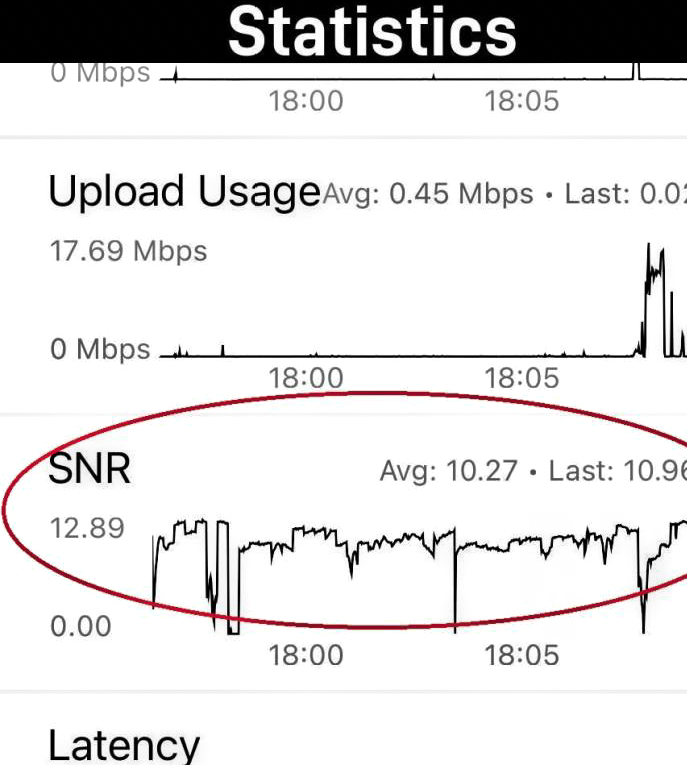 Let’s assume that the average network load is 80 percent of its full capacity. In this case, the cell has 672 Mbit, which can serve 296 subscribers, or 14 percent of potential subscribers living in the cell. To serve a larger number of subscribers, you need to use the second, third, and so on, the beam of the same or another satellite but always on a different frequency. 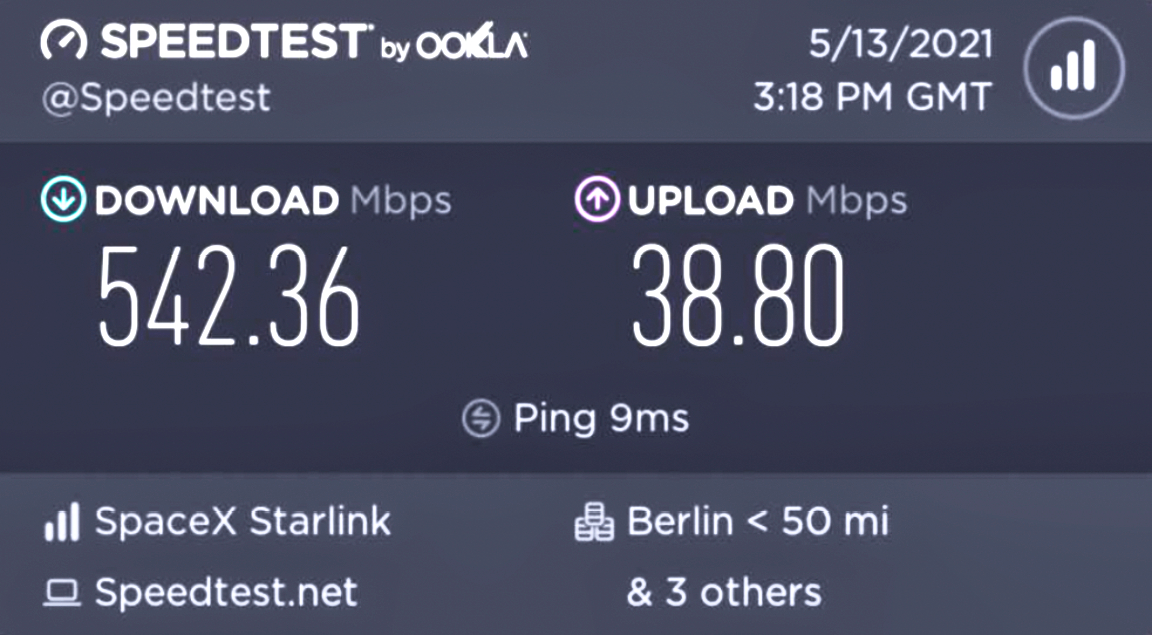 You can also count down how many users in the continental United States can be served by a fully deployed StarLink Ku-band constellation — 4,408/4,229 x 500,000 = 521,000 active users. Taking into account Alaska, Hawaii, Canada, Europe and other countries, it will be possible to talk about a million users. Let us repeat that — the calculations were carried out for the current model of the UT-1 terminal and the traffic consumption profile of users in the USA. 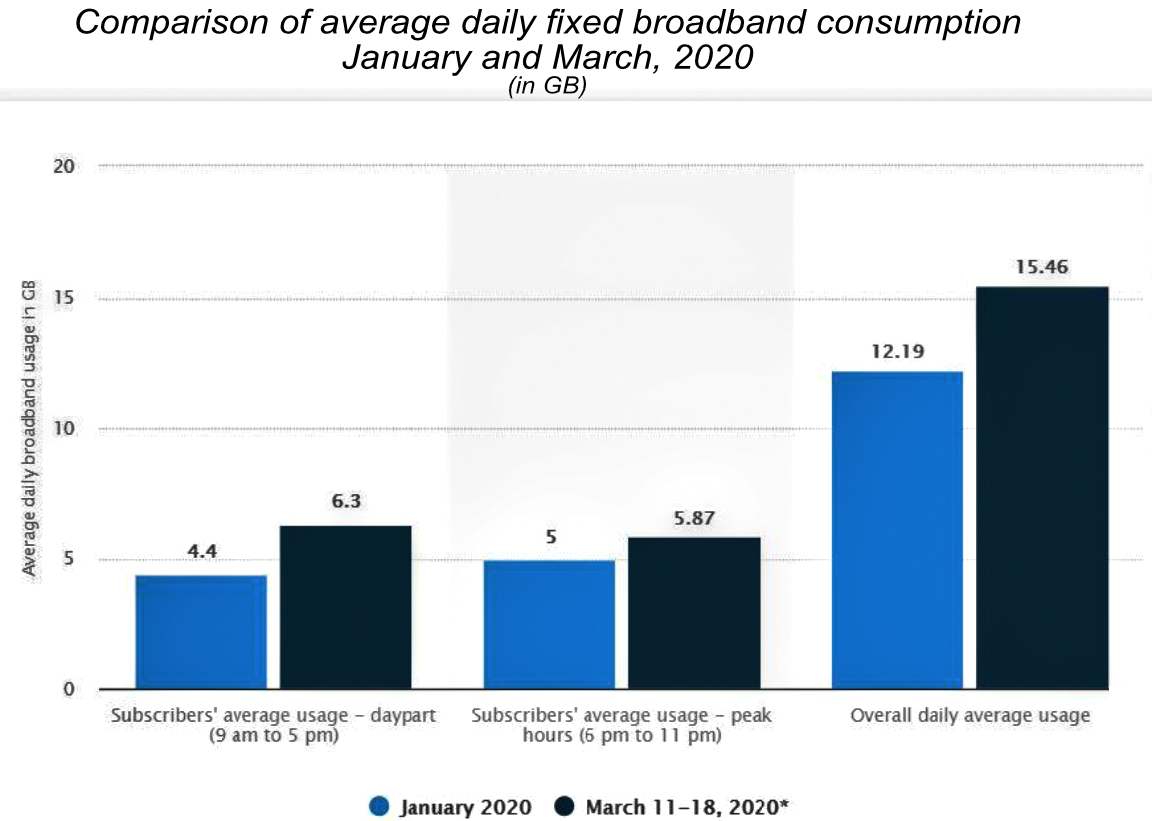 Actual data on traffic consumption by subscribers in the USA for 20204.

If, in the future, SpaceX will publish the number of active users (and ideally the average traffic consumption per a single subscriber) by the countries of its presence, then it will be possible to check the estimates with the actual situation.

Author Dr. Sergei Pekhterev started his career in the satellite communications industry in 1993. He has been actively involved in the construction of satellite communication networks in the CIS: in Russia, Kazakhstan, Uzbekistan, and Georgia. He led the VSAT direction of the Romantis project (a joint project of Dornier Daimler Benz Aerospace, ANT Bosch Telecom and Deutsche Telekom) and later in DeTeSat (Deutsche Telecom Satellite). In 2003, he together with his partners started AltegroSky, of which Dr. Sergei Pekhterev became the CEO. During his leadership, AltegroSky became the largest private provider of satellite communication and broadband Internet in Russia. Currently he is Chairman or Member of the Board of Directors in AltegroSky, Ka-Internet and Astra Internet (all companies are Russian satellite providers operating in various market segments B2B, B2C, B2O).